The Verge still has its bro-y car and boxy watch reviews. But the tech-and-gadget site has made sure it has the other gender covered, with reviews of sleek, bracelet-like wearables and even a Kegel exerciser.

When it was founded four years ago, The Verge drew an overwhelmingly male audience. It started adding entertainment, science and transportation coverage to broaden its audience and advertising base. It has also sharpened its approach to social media. All this has helped site traffic (up 4 percent to 13.1 million visitors in November, per comScore) and social audience (up 87 percent, says the Verge) in the past year. But the changes have helped the Verge with another goal of bringing more women to a historically dude-dominated category.

The results include posts like this one on a women’s wearable bracelet (3,964 likes on Instagram) and this Kegel contraption, which let the Verge show its “technical expertise,” as Havlak put it. (It should be noted, however, that the Verge isn’t alone in eyeing Kegel gadgetry, as this Techcrunch piece shows.)

At first glance, the Verge still looks like some of its peers in terms of gender breakdown: The site’s traffic is 67 percent male, which is similar to Techcrunch, Gizmodo and Engadget. But the gender split is less pronounced than a year ago, when it was 79 percent male. The Verge is also reaching more women through female-centric social platforms, which aren’t reflected in site traffic. 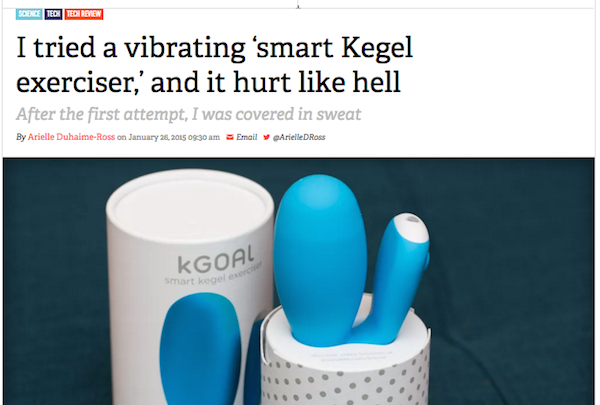 Much of that audience development work falls to Helen Havlak, the Verge’s engagement editor, who discussed the various ways the site has grown its female audience. “It was definitely a year of maturing our platforms and deciding what are the things that are working,” she said.

Naturally, the platforms with strong female user bases have been key to reaching women. The Verge’s Facebook follower count grew 150 percent to 1.5 million in the past year. The Verge has also put a big effort on native video there, with a 763 percent increase in views. It helps that the Verge now has broader subject matter to draw from, but Havlak also advises the Verge’s video team on what video content will do well on what social platform.

The publisher has also made a big push on female-skewing Instagram. Tech sites tend to run a lot of product photos in their Instagram feeds, so Havlak decided the Verge would share original photos only. The Verge posts about six such photos a week, and they get a lot of bang for the buck; those six get about one-third of the likes and comments that the Verge gets from the 450 or so tweets that the Verge spits out in a typical week.

Tumblr’s dual-audience readership makes it a way to expand its female audience. Here, the Verge added 100,000 followers this past year and now tops 410,000 followers.

The Verge has brought more women on staff as its broadened its coverage, which has helped in a couple of ways. There are a number of women leading or reporting on entertainment, science and products, such as Emily Yoshida, who heads up entertainment. On a purely superficial level, seeing women bylines can serve to make the site more approachable to female readers. More substantively, having women on staff also informs editorial choices, so product reviews aren’t just by and for men.

The #Fossil Q Dreamer is a $125 connected bracelet for women that’s more style than substance.

“To get other people to read us, we have to cover a wider breadth of topics,” she said, “but we also needed more female reporters on the staff, [to] make sure we don’t just cover men’s clunky watches.”

The problem with off-site growth is that publishers are limited in their ability to monetize it. Facebook is just starting to let publishers monetize native video. Tumblr hasn’t been a major traffic driver for publishers, despite requiring a hand-crafted approach. For publishers, the hope is that the people they reach on those platforms will eventually turn into regular visitors to their own site.

A site like the Verge could be a way for certain advertisers that want to reach women in a tech-news context. “There’s a demand to reach qualified, engaged audiences. If the Verge can deliver women who actively care about their content, that’s what matters,” said Jamie Gutfreund, CMO of Wunderman. And piggybacking on the Verge’s social media is a way for brands to experiment with social media in the safety of the publisher’s environment, said Lee Baler, media vp, group director at DigitasLBi.

But there are also limitations to how much the advertiser can target, how the ad can look, how much reporting data the platform will provide. “It’s a well-lit environment,” Baler said. “But you do have to meet the qualifications of the platforms.”

Image courtesy of The Verge.