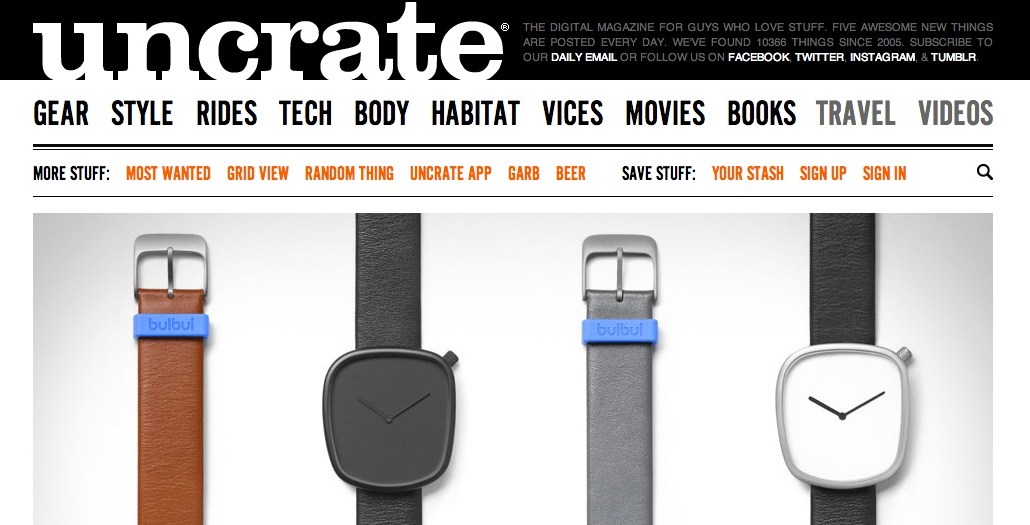 His Zombiecorp operates three sites — Uncrate, Devour, and Gallivant — that serve over 15 million pageviews to more than two million unique users every month, and attract ad dollars from some of the world’s most prominent brands. It does that with a team of just 12 people. Angell has built a business around “curation.” He and his staff mostly just scour the Web for the best of the best.

Uncrate.com, which digs up products that men might find interesting,  is the cornerstone of the company. Angell started the site in 2004, and it accounts for two-thirds of Zombiecorp’s pageviews. Uncrate publishes short blurbs of items like a Stumptown camp coffee kit, spy gear, even a new Cadillac. The site carries ads from the likes of Absolut and Mr. Peanut.

“I just wanted a site that was full of all kinds of great products, but edited down for me so I wouldn’t have to sift through the crap,” he added. “We leave out all of the stuff that isn’t worth your time. Automated algorithms are the devil.”

Zombiecorp has expanded into two new areas with three-year-old Devour.com, a site that bubbles up great YouTube videos, and Gallivant, a travel site that launched last October. The sites all share a clean Web design, with large images and without tons of banner ads.

Compared with huge, established brands like Esquire.com, which reaches 4 million uniques each month, you realize Angell’s properties are growing nicely. They’re also run by just a handful of people, as opposed to the huge teams that power other mens’ interest sites.

In 2010, Angell expanded with the launch of Devour.com, a site devoted to hunting down the best of the many YouTube videos out there. As Angell explains, it would take approximately 6,400 years to watch all the content uploaded to YouTube every day. His plan for Devour was simply to make life easier for people looking for interesting videos to watch on their lunch breaks. “It’s about “Fewer cute kittens, fewer nut shots, fewer laughing babies, and lots more awesome,” he says.

Major brands see the sites as an attractive opportunity. Devour has seen sponsorship deals from advertisers such as Mercedes, Intel, Best Buy, and Land Rover, and Uncrate from Toyota, Gap, Microsoft, Sprint, Target, and many others. Federated Media helps sell its ads, but increasingly Zombiecorp is working directly with advertisers.

Uncrate makes money primarily with IAB standard display ads, but is starting to branch out into sponsored posts. Underwear brand MeUndies, for example, was running what are essential paid links on the site last week. Devour lets advertisers place their video on the homepage for a fee.

Angell said his sites work well with the sponsored content model, but that he’s extremely particular with who he sells sponsored spots to. He only accepts ads from companies whose product or video is “as good” as the content it would usually feature. “We turn down a ton of potential sponsors because their product or brand just isn’t good enough,” he said.

Zombiecorp’s sites prove that you don’t need an editorial team of dozens and an ad sales army to make an online media business work. You don’t even need to produce your own content. You do, however, need a product in demand.

“Word of mouth still works wonders,” Angell said. “You just have to build something that people love.”