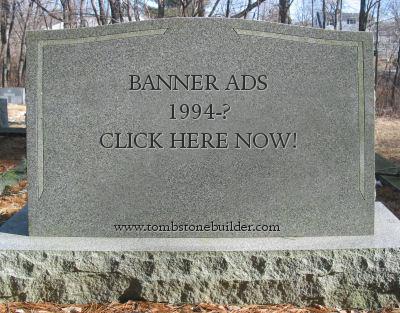 There’s been a lot of talk recently about the “end of the banner ad era” and the rise of so-called native monetization models. At the same time, AOL and others are pushing to rethink the display ad format. Digiday asked a group of industry leaders from agencies and publishers whether the days of the banner ad are numbered. Here’s what they said:

David Cho, publisher, Grantland
There’s no way it’s that simple, right? I think it’s hard to argue with the fact that banner advertising, which hasn’t changed at all, really, in the last 10-12 years, is quickly becoming more and more exposed as being sort of flawed in how its conceptualized within the online publishing community. That being said, a majority of the publishers, specifically those with the largest scale, continue to use it. Marketers, specifically those looking for the largest scale, continue to ask for it, albeit with more wrinkles now as people want louder, non-standard units. It seems unlikely that there’s going to be some sort of large scale change anytime soon. The reality is, it’s on the shoulders of the marketers to be more creative, and less risk averse, when it comes to how they execute their marketing campaigns. As long as agencies are beholden to performance metrics like CPMs (or even worse, CPAs or CPCs), the banner ad probably won’t be going away anytime soon, because from the vantage of a marketer, it’s the easiest thing to buy — and then explain to your boss and/or the client. Is it time to rethink that strategy? I mean, probably.

Chas Edwards, chief revenue officer, Luminate
Most display banners are intended to drive DR and clicks. We use all our graphical tools to build DR ad products as opposed to thinking of a native ad experience for brand building. The banner is worth saving because the dimension of pixels is irrelevant. We’ve been putting the wrong stuff in the rectangles and blaming the rectangle. What’s great about TV commercials isn’t that they’re 30 seconds long. What’s great is filmmakers used a 30-second canvas to tell a story about a brand and did it artfully. If they decided it was 45 seconds, it wouldn’t have mattered.

Jim Bankoff, CEO, Vox Media
The two online ad markets are growing farther apart. The first market, low-value banners on undifferentiated (and often low quality) sites, may not be dying, but it is being relegated mainly to direct marketers who hit diminishing returns on search. The second market, where creative campaigns are deeply integrated with high quality digital content and valuable targeted audiences in context, is where real brand building occurs. Brand marketers are demanding creative, customized solutions because they work. At Vox, our integrated campaigns drive between 10 and 100 times higher performance than straight ad banner campaigns. Cookie cutter ad units alone don’t engage a distracted group of fragmented consumers. Yes, advertisers want turnkey simplicity and scalability, but solutions to those challenges shouldn’t come at the expense of the marketer’s ultimate goal. Banner advertising may be dying for brands and premium publishers, but integrated marketing is alive and well and has potential to scale dramatically.

Darren Herman, chief digital media officer, KBS+P, The Media Kitchen
Native monetization models are hot right now, but the problem with them is that they create a headache for marketers and their agencies to execute against as product budgets aren’t infinite. In addition, it’s nearly impossible to manage an entire campaign of fragmented native opportunities at scale. I’m excited about a new crop of companies popping up that use APIs and other ways of technology driven management of native campaigns. And of note, banners aren’t dead – advertisers still need to push messaging to the right audience, at the right time, in the right place. Good creative in a 300X250 actually works — contrary to all of the heat that banners receive.

Lars Bastholm, chief creative officer, Cheil USA
I have to answer this question in two ways. One wearing my hat as a member of IAB’s Agency Advisory board, and one wearing my creative hat. The new IAB formats, the so-called Rising Stars, at least try to innovate the formats and possibilities of banner ads. Whether successfully or not remains yet to be seen. As a creative guy who has been working in digital since 1995, I would love to see publishers rely less on a format that has changed so little and proven so unsuccessful with consumers. But as of right now, I can’t tell them of a simple, proven alternative way of monetizing their content. When I can, I will.

Alex Magnin, vp of sales, ThoughtCatalog.com
If the rise of display ad tech has proven anything, it’s that no amount of targeting will bridge the fundamentally adversarial relationship between a user consuming content and an advertiser whose primary means of making an impression is getting in the way of that consumption. Digital shifted the balance of power – the brand-spend gap is not closing soon. The way out? Remember the Internet is the first two-way-street media. The kernel of the banner’s salvation is there. But to save it will take more thoughtfulness and creativity than our industry has thus far displayed.

Rich Antoniello, publisher, Complex
I think so. Let me take a step back. I look at it like it’s not an either-or. It’s a new product added to the suite of things, not in lieu of. It’s not like digital has replaced TV; it’s not digital has replaced magazines. You have to understand what the advertiser is looking for; what the buy side is being conditioned for. We talk about accountability, metrics of being a problem for online video, that also more disproportionately applies to native monetization models. Standard IAB units are not a great play. To lump all banner ads — rich media, custom content — and say that’s over and done with is a little crazy. There’s a lot of metrics for success. Native ads are almost impossible to measure; they’re based on editorial consumption. If they can barely measure banner ads effectively, how do they think we’re ready to move on with no metric of success that’s common across everything?  We’ve been doing a lot of the native stuff already — creating videos from an editorial platform, creating editorial things that can be spread from a social perspective; maybe there’s a hybrid model where people can come in sideways from social networks and ad buys against the consumer so it’s all about social booster. There are a lot of ways to solve this without throwing the baby out with the bathwater

Ann Lewnes, svp of global marketing, Adobe
Banners get a bad rap but they can be very effective as part of an overall campaign. Like with every other form of advertising, creativity and media placement are key. People can get lazy with banners and then blame the lack of impact on the medium, not the message. You need to start with a creative, finely crafted value proposition. And then, place it under your customer’s nose. Banner effectiveness has improved significantly with the emergence of new targeting technology, which allows us to consistently deliver more relevant messages to the right people. This, coupled with increasing sophistication about the inter-relationship between different media (and the impact of each in the marketing mix), has shed new light on the role that banners play in a campaign. All that said, at Adobe we are always looking at what’s next. Media is changing so quickly. We experiment every day and continuously shift our investments based on what’s working best. Right now, banners are still in the mix.

Rick Webb, co-founder, The Barbarian Group
I think the Banner has a bright future. They’re awesome. First, they’re cheap. Second, they’re everywhere. Third, they’re cheap to build. What’s not to like? Did billboards disappear? Print ads? We were sold a barrel of goods when the banner first came out about direct tracking, ROI and whatnot. That future is dying. But the banner is still an impeccable branding vehicle. When an agency takes the time to craft banners with strong concepts that add real support, rather than slavishy mimic, a campaign, they work wonders for the money. They’re still the only truly broadcast ad medium on the Web.