Tech blog The Next Web doubles down on e-commerce 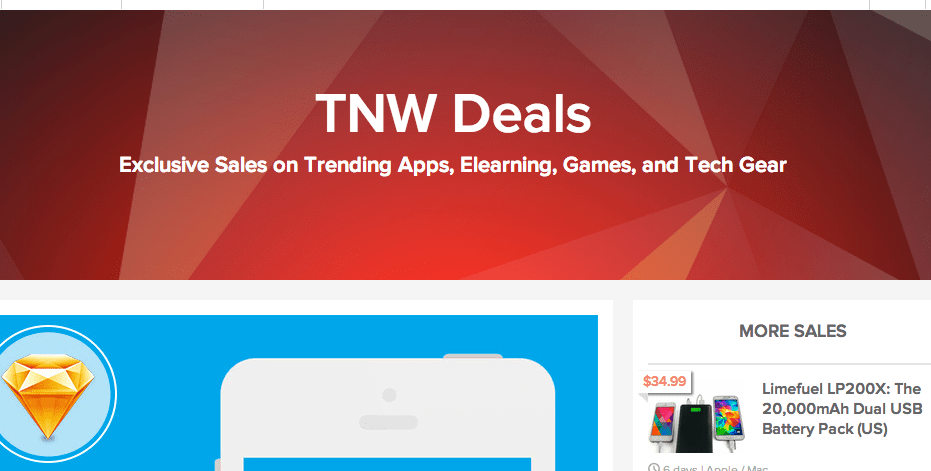 The reality of publishing today means media sites must chase multiple sources of revenue. Technology, business and culture blog The Next Web (TNW) understands this inherently and has recently turned to e-commerce to ensure an income stream independent of its ad sales. Like Gawker and Refinery29 before it, TNW is working to make commerce an integral part of its business — while still remaining a publisher at its core.

The Amsterdam-based publication primarily focuses on the English-speaking market. The site has 710,000 unique users in the U.S. and U.K. on desktop according to comScore MMX in October 2014, but claims to have 1.7 million according to its internal figures. Three-quarters (76 percent) of its audience is male. With TNW Deals, it’s capitalizing on that audience’s hunger for e-learning products, apps, gadgets and drones.

TNW Deals sits as its own vertical within the wider TNW site, but posts about sale items are fed into the main blog itself. So, alongside stories such as Mozilla’s rumored move to bring Firefox to iOS, it runs deals for discounted software subscriptions like this premium password manager offer.

For many publishers, the e-commerce presents two major challenges: a need for high upfront investment coupled with a potential to distract from the publisher’s core competency — and, in the process, alienate readers. With the help of tech startup StackCommerce, which works with publishers to offer tailored deals, TNW receives a cut of the revenue for the sales it makes, while forgoing the headache of actually running an online shop.

Deals is TNW’s second attempt at running an e-commerce operation. Its Markets product included user-generated listings and involved sourcing most of the deals itself. While Markets had high staff costs, TNW Deals is a much learner operation. StackCommerce picks up most of the product discovery, billing, shipping, order fulfilment and customer service. TNW picks up the marketing of the offers with a team of two using email, social and posts on the site.

“With TNW Markets, we did everything ourselves. We had to stop that after a while because the overheads were so big. With the white label branded shop we do now, it takes a lot of work out of our hands,” said Juan Buis, TNW’s partnerships manager. “We source some but not all the deals ourselves, but it takes away a lot of the shipping, and other things that come with running a shop.”

Four months in, Deals is a fast-growing revenue stream for the publisher. On a $100 drone, TNW would typically take $15 of the sale. That said, Deals still accounts for less than 10 percent of the company’s total revenue.

Affiliate deals are common for tech sites — take Lifehacker UK’s top Black Friday deals piece which included several partner links. But TNW Deals goes a little deeper, giving its readers a permanent destination for niche tech products.Unlike other affiliate programs, all the repeat purchases are channeled back through their store. In standard affiliate models, the publisher only gets a share of the initial purchase.

It’s also able to use Deals to grow its audience, through the use of freebies. For example, TNW put an audiobook from author and lifestyle guru Timothy Ferriss up for free download. Users need to login, like or follow the next Web on Twitter or Facebook, and then share the item to redeem the offer. Casual Web visitors have then been converted into followers, TNW claims.

“It’s been amazing for us. Our TNW Deals newsletter is getting bigger every day, which makes it easier to market to returning customers and give them deals they can’t get elsewhere. The fact that we’ve got our own shop makes people come back and extends our customer lifetime,” said Buis.