The state of mobile ad spending in 5 charts

By now, mobile’s ascent is uncontested. But still unknown is how fast it will continue to climb — and how high it will go.

Start with the usage numbers. Americans spend an average of two hours and 57 minutes a day on mobile devices, a hair more than they do on television, according to app analysis company Flurry. EMarketer expects the global number of smartphone owners to surpass 2 billion by 2016, which represents half of mobile phone owners overall.

With those kinds of penetration and usage numbers, ad spending is also on the rise. Here are the latest projections.

The display ad has seen better days. The rise of ad blocking, coupled with sinking click-through rates and CPMs, has made the display ad format an increasingly tough sell. At the same time, mobile’s prospects are rising as more people around the world get their first smartphones and spend more time glued to their screens. The result is that by 2018, mobile ad spend will overtake that of desktop, according to a recent report from PwC.

Mobile ad share is eating into print, desktop and even television.

While mobile ad spending is on the rise, most of the global spend still goes to television, which controls 39 percent of global ad spend, according to a new report from ZenithOptimedia. Television, however, is showing slight signs of decline. By 2017, its share could dip to 36.8 percent, while mobile’s overall share will climb to 12.9 percent.

Mobile spend is speeding up, while television’s is slowing down.

In terms of growth, mobile is where the action is. Global mobile advertising revenue is expected to climb 52 percent this year, while television ad revenue will increase just 1.2 percent, according to a new report from Magna Global. In absolute terms, though, there’s still a wide gap between the two mediums: Global mobile ad revenue next year will hit $68 billion, while that of television will top $208 billion.

Still, the mobile revenue opportunity isn’t evenly distributed, and few projections expect that picture to change. This year, Facebook and Google alone will account for half of the $28 billion spent on mobile advertising in the U.S., according to eMarketer. Twitter, the next-largest competitor, will control 4.6 percent, while Yahoo’s share will clock in at 4.1 percent. 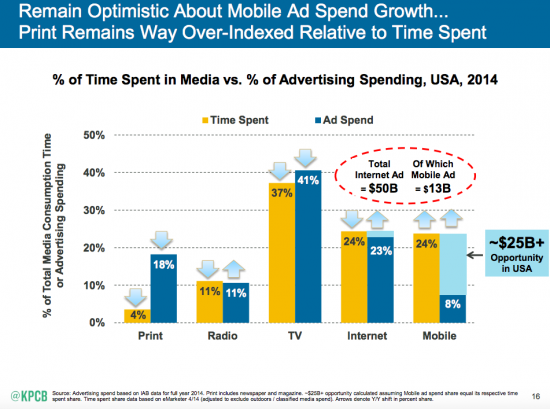