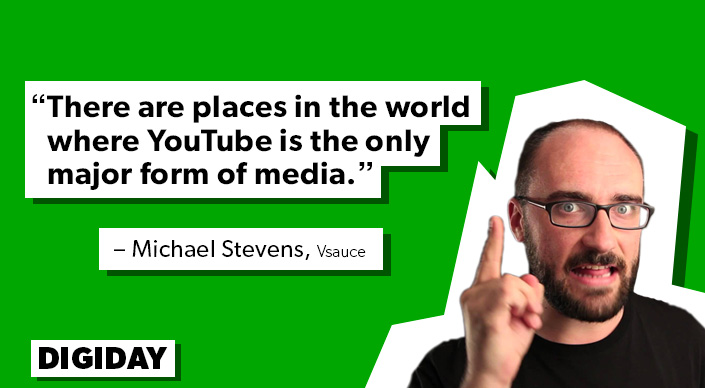 With the help of YouTube, Michael Stevens has become one of the world’s most popular educators.

Stevens doesn’t hold a Ph.D or reams of patents in his name, but he does have a massively popular YouTube channel: Vsauce. In his videos, Stevens follows his personal curiosities down the rabbit hole, asking scientific questions like “What is the resolution of the eye?” and  “What is the speed of dark?”

Stevens’ frenetic (yet carefully crafted) journeys to answer those questions have resonated with teachers, scores of whom show Vsauce videos to their students. But Vsauce has major traction outside the classroom, too. Since its June 2010 inception, the original channel has amassed over 8 million subscribers, while partner channels Vsauce2 and Vsauce3 have racked up over 3 million and 2 million respectively. Together, Vsauce channels topped a billion total views this past June.

Digiday spoke with Stevens to discover the secret sauce behind his YouTube success and his lessons for others on the platform. Excerpts:

What’s your typical day?
My typical day involves a lot of books, a lot of research and a lot of synthesizing. My desk has no room for a computer at the moment. I write down key things that I’m learning, that blow my mind or surprise me. Like a crazy person following a conspiracy, I attach these things together and figure out how to write a script out of all of it.

Your creative process is pretty solitary, then?
Yeah, I research and write on my own. When you watch one of my videos, you’re hanging out with what I’ve been obsessed with for the last two weeks. I’ve found a way to make a living off what I would want to do anyway, which is read and Google weird questions all day.

Why do you think your videos have been so successful?
In terms of presentation, there’s an authenticity to it. If you were to run into me on the street and ask about the details in one of the videos, I would talk with you for an hour about it, as opposed to someone who had a script written for them. There are a lot of people that are infected with curiosity and really can’t help but look for answers. And viewers share things and become fans of videos because it reflects well on them. When you “like” something, you’re not just liking it, you’re saying to everyone else that you are like that thing.

I scrolled back to your oldest videos and found it was mostly gaming stuff. How did you make the transition to broader, more educational topics?
It was unintentional. I am not good enough at video games that the original purpose of the channel, video game comedy, was going to work. What I was really passionate about at the the time was hot peppers — what’s the hottest hot pepper you can grow, where’s the heat come from, etc. — so I did a video about the botany of hot peppers. Everyone who loves hot sauce shared that video. It was way more successful than what I was trying to do that was more in the video-game and geek-culture space.

What do you do if you get something wrong in one of your videos? Has that happened?
If it were to happen, you take the video down. You have to. The mistakes I’ve made have been really dumb ones. I did an episode where I said Stalin instead of Lenin, so I just deleted it, re-edited the whole thing and put it back up. For the most part, I am a curator of info, so I will share different theories that various papers and scientists have put forward. Whether those theories are true is what science is all about. Attribution is key: I might have some of the longest video descriptions on YouTube, which are effectively bibliographies of links.

Is YouTube getting better for creators?
YouTube is getting better for creators because the audience is getting larger and larger. There are places in the world where YouTube is the only major form of media. It’s just where people go. If you have a niche topic that you love, you can find a million people who also love it. It is the place to find the largest audience for video. As it grows and more premium people move onto the platform, it’s just going to become a better and better place to distribute and to be discovered.

How do you feel about the multichannel network industry that has sprung up around YouTube creators?
I just think that it’s a huge sign of how seriously everyone is taking new media. It’s a big deal. We’re seeing people arguing for the good and the bad, and that discussion is so important.

Are you signed to one yourself? What are the pros and cons there?
No. I’m really happy with the way that Vsauce is going, and I do have an agent that is helping with the next things I want to do in my career, so I’m able to keep myself incredibly busy as I am. A multichannel network can be a great solution for other people, but everyone’s experience, career and needs are so different.

How does the brand-deals process work for you, untethered from a big network?
I really haven’t done very many [brand deals], but all of these partnerships have come to us. We haven’t sought them out. There’s always an exchange of resources: As you know, I’m a researcher and synthesizer of info, so I need to be paired with the experts and literature. For my recent [diabetes education] campaign, Novo Nordisk had people on staff that knew all about it personally, so I could soak in all that info from them. They have great graphics people, too. Then I added my own twist, which is fun questions and an excess of info, to make people pay attention.

So most of your revenue comes from YouTube ads, then?
Yeah, ad revenue is predominantly where it all comes from. It’s enough to be sustainable. That’s afforded Vsauce the ability to not have to do too many other sponsored things. We’ll do a few when there’s a really cool opportunity, like with Novo Nordisk, which is the first time I’ve done videos for a separate channel.

You’re not the only Vsauce channel out there. Why did you expand the brand to include Kevin Lieber (Vsauce2) and Jake Roper (Vsauce3), and how closely do you work with them?
We never really professionally planned out the launching of new Vsauce channels. Jake came on as a guy who was going to edit some of my episodes. He clearly had a lot of talent, so I decided he should have his own channel. We talk a lot over email and on the phone, obviously, but I don’t know what episodes are going to be coming next. We all share a common attitude and aesthetic vision, which makes Vsauce seem very streamlined, even though all of us work independently.

Where did the Vsauce name come from, by the way?
The name comes from randomness, literally. There’s a website called fakenamegenerator.com, which will give you another English website name every time you refresh it. Most of them are pretty silly, but after refreshing it all night I eventually landed on Vsauce.com, which was six letters and available. So Vsauce became the name. That’s it. There’s no secret meaning.

Do you have any advice for aspiring YouTubers?
To anyone starting out, whether you’re a young kid or a company, just make things. The more you make, the more lessons you’ll learn. That’s how I did it. I was making three videos a week at one point. Ninety percent are going to be terrible and you’re going to be embarrassed, but you’ve got to put them out anyway. It’s the way to get better.