Second-Screen Super Bowl Was a Letdown 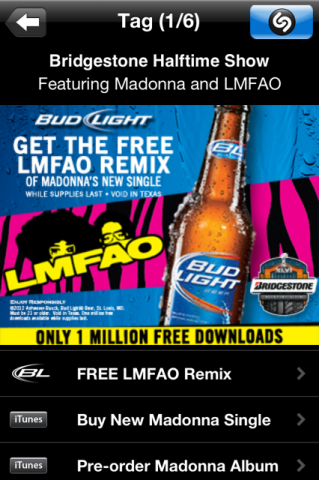 The hype around second-screen Super Bowl experiences was at full throttle during the run-up to the game last week, with numerous TV check-in services predicting their busiest days to date, and major brands announcing sponsorships and integrations.

But ultimately the experiences provided by apps such as GetGlue, Shazam, IntoNow and others were somewhat disappointing, and marketer content was surprisingly hard to come by.

Despite GetGlue’s partnership with Pepsi, I was rewarded with nothing but a virtual sticker for checking into the game on GetGlue. Users were required to leave a comment with the word “Pepsi” to receive a two-for-one coupon, but that fact wasn’t communicated anywhere at the time.

Pepsi had a similar campaign running with IntoNow, which was supposedly serving up Pepsi MAX-related content to users who tagged the game, including a chance to win a lifetime supply of the beverage. I tagged during the first quarter and saw no Pepsi MAX-related content then, or during the rest of the game. Admittedly, I didn’t have the application open when the Pepsi commercial itself actually aired, but that’s because I was too busy attempting to “Shazam” it.

Almost half the ads that aired during the game were “Shazamable,” meaning viewers could use the audio recognition technology built into the mobile app to unlock extra content from those advertisers. I was attempting to tag every ad I possibly could as soon as the Shazam logo popped onto the screen, regardless of whether or not I was interested in the brand or product. For most users, a 30-second ad would be over by the time they’d decided to Shazam it, reached for their phone, launched the app, and given it the five seconds it requires to recognise the audio from the commercial.

My attempts to tag ads in a packed bar proved futile for the most part, though, owing to background noise. As a result, the only ad I managed to tag was a Toyota one, which invited me to enter a sweepstakes to win a Camry.

Perhaps to circumvent the background noise issue, Go Daddy opted instead to run a QR code in its creative. Again I rushed to switch between apps and find my code scanner, only to find I was unable to scan it successfully before it disappeared.

All in all, attempting to interact with any of the apps during the game was, for me personally, just a hassle. I would have preferred to watch the ads without the pressure of interacting with them, perhaps checking my Facebook feed to see what friends were saying about the game every once in a while.

Ultimately I’m not convinced it’s great for the advertiser, either. As I was juggling my beer, my iPhone and my chicken wings to try to tag ads and QR codes, I realized I wasn’t even paying attention to the content or the creative, anyway.

As a result, if social TV services and advertisers want users to interact with their ads during big events like the Super Bowl, I can’t help but think it needs to be a smoother, easier consumer experience. I just ended up feeling frustrated by the whole thing.