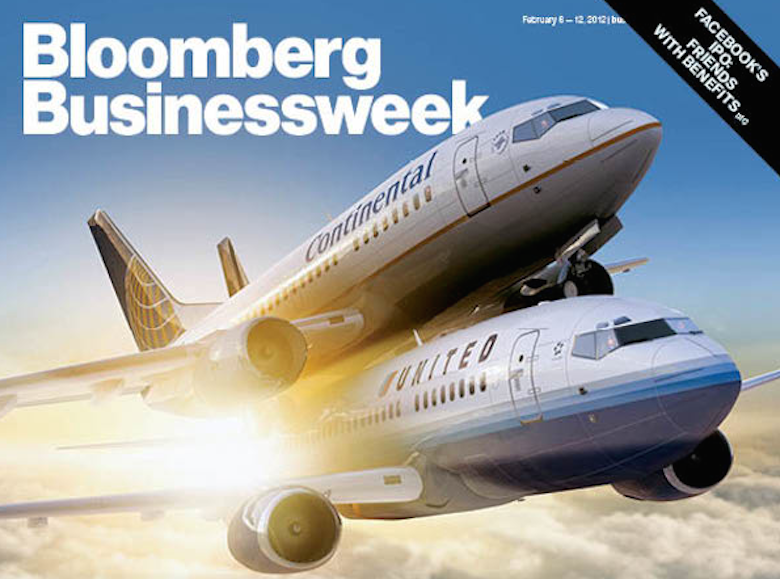 Richard Turley, who helped give us a reason to read Bloomberg Businessweek again with his attention-grabbing, often provocative covers, is leaving for MTV. In his four years at the newsweekly, his cover subjects included two planes copulating in mid-air, a businessman with his pants around his ankles, and a Twitter bird trying to kill itself. Here are some of Turley’s most memorable covers:

Let’s Get It On
The mating planes, to illustrate the United-Continental merger, sparked significant online conversation. The Feb. 6, 2012, cover, which editor Josh Tyrangiel called a tribute to Marvin Gaye, the “Airplane” movies and a ’90s Economist cover featuring camels (as well as a stand-in for a Valentine’s Day cover), was an American Society of Magazine Editors cover contest winner.

Bang Head Here
Businessweek summed up Europe’s economic crisis with a bold yet simple message. This May 28, 2012, cover was also an American Society of Magazine Editors cover contest winner.

It’s Global Warming, Stupid
Without mincing words, Businessweek linked Hurricane Sandy to climate change with this headline and photo of a flooded street for its Nov. 5, 2012, issue. “Our cover story this week may generate controversy, but only among the stupid,” Tyrangiel tweeted. The cover got 856 retweets.

Hedge Fund Myth
Called everything from “brilliant” to “inappropriate,” the July 7 cover used a play on male impotence to call out hedge funds for what they are.

Twitter Bird
The Twitter bird got a top hat and monocle for the Nov. 11 cover that was a sly play on The New Yorker (redrawn so as to placate the lawyers).