This is the second article in a series called “Mobile Monetization for Publishers,” where we look at how publishers are tackling the challenge of making money from their mobile audiences.

With its new app, Quartz is betting that business globetrotters speak emoji.

The business news publisher’s first app, set to launch for iPhone users today, takes its inspiration from two popular trends in mobile: push notifications and messaging apps. Open the app, and it starts a friendly conversation, like the kind you’d have with a human on a messaging app.

Part of Atlantic Media, Quartz has pursued a platform-agnostic approach from the get-go, whether it be self-contained newsletters or distributed Facebook video. A year in the works, Quartz for iPhone eschews the traditional news app format, with its stream of headlines. Instead, it sends you messages in text bubbles, and you can respond tapping a pre-selected emoji or message, like “what does it mean?”, “yeah, let’s do this” or “Uhhhh.”

Like Quartz’s newsletter, the app links to stories from Quartz and around the Web, but the messages are meant to be complete enough that you get the gist of the story without having to click through. It’s a triumph of user experience over the traditional publishing model, where publishers use every headline trick in the book to try to get people to click through to their site so they can maximize the audience for ad sales purposes.

Quartz editors spent months working on the tone. (All the messages are indeed written by people, not bots.) Zach Seward, vice president of product and executive editor of Quartz, said they wanted it to be equally as entertaining as it is informative, and getting the interactive writing right was a big piece.

“It’s for people who are young or young at heart,” he said. “The tone is entertaining. Part of that is, the phone is just a more intimate experience, especially when it resembles a text message conversation.”

At one point, they thought about personifying the app’s voice, but that felt “hokey,” he said.

“You’re having a conversation with Quartz, ultimately,” he said. “The challenge is doing that in a way that’s continually engaging.” 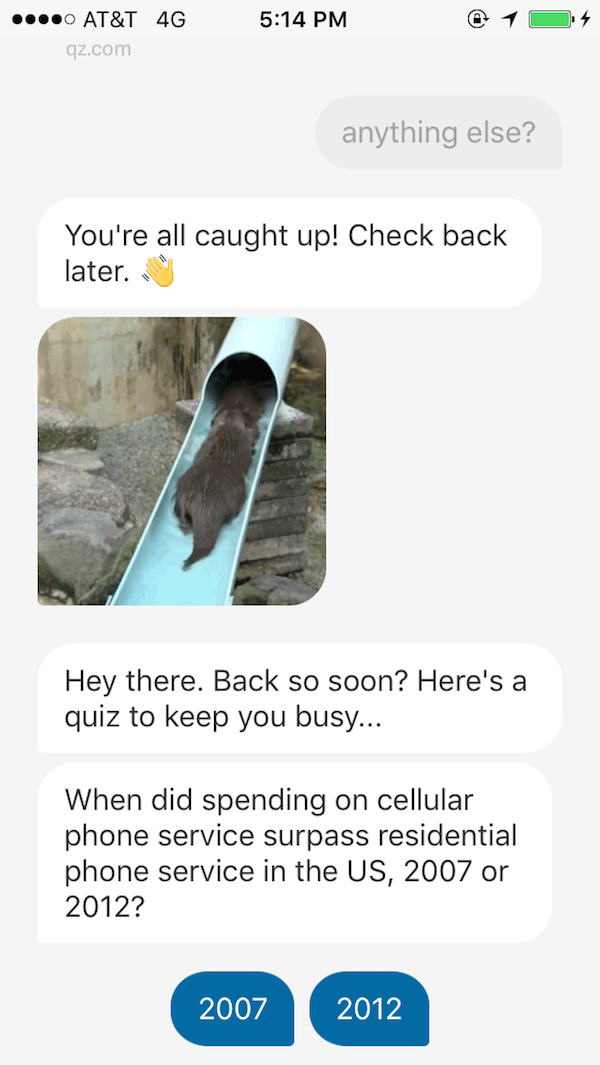 The app has a few customization options. By swiping left, you can choose to get really big news (signaled with a buzz); important news (once or twice a day; market news, delivered haiku-style; and news updates that are sent a few times a day.

The app is designed to be used in quick periods of time, when you’re in the elevator or waiting for the train; each session lasts a few minutes. In between updates, it’ll serve up quizzes and GIFs.

As with Quartz’s other distributed content plays, Seward said the goal of Quartz for iPhone isn’t necessarily to get people to click back to the site (although the app lets them do so), but to be self-contained and develop a loyal user base that it can sell advertising against. (Mini is sponsoring the app at launch; its ad is integrated into the flow, designed to look like the editorial-driven messages.) Whether market news works as haikus is anyone’s guess.