FT enters the wearable fray with a new app for Samsung 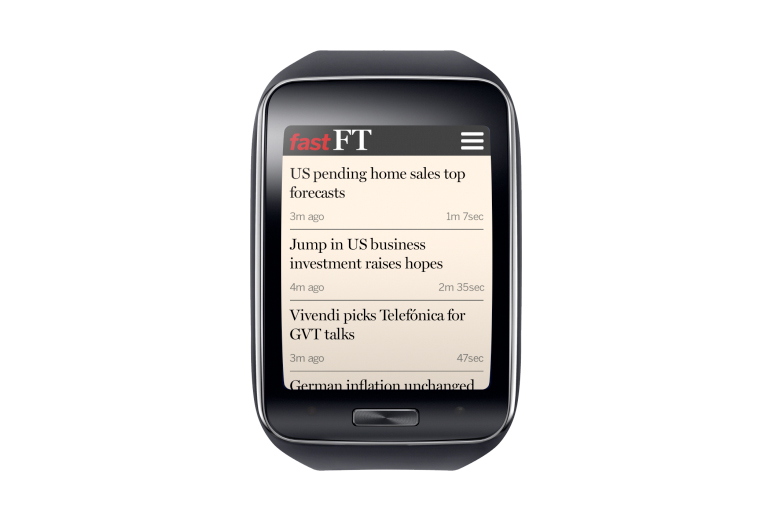 Recent studies have indicated that British readers are getting their news from fewer sources on mobile, and that the U.K. app market is reaching saturation point. Publishers feeling the pinch are frantically on the lookout for next digital growth opportunity. One avenue may have some potential: Wearables.

The Financial Times has launched an app on the new Samsung Gear S smart watch. The fastFT app is a new mobile-first iteration of its 24-hour breaking news app, and takes advantage of built-in speed-reading technology from Spritz, which flashes single words at the screen in rapid succession. The move follows other experiments from media companies, such as the Guardian for Google Glass, ESPN’s sports alerts app for Jawbone and Pocket’s text to speech app for the Gear S.

But analysts are divided on the market potential for wearbles. For its part, the FT says the move is part of a policy to remain nimble as it experiments digitally. “It supports our strategy of making FT journalism available in whatever format our readers choose, and reflects the rapid growth of mobile, which now counts for almost half of all our digital traffic,” said FT CEO John Ridding.

In the case of the FT, experimentation is kept low cost by maintaining an API that can supply Financial Times content to third party developers in order to promote development new platforms. “Media companies face an ever-increasing number of devices and platforms for their content, this agile approach isn’t just important, it’s critical to innovation and growth,” said FT digital product manager Alexander Walters.

While smart watches might not be a platform for every news brand to explore right away, for a specific applications like fastFT, wearable tech might be a natural companion. “Our readers come to us for the most important stories around the clock, and it was an obvious decision to try technology that allows even easier and quicker delivery for readers on the move,” said Walters.