Should publishers take down controversial posts?

To unpublish — or not to unpublish. That’s the question for publishers that really step in it with regrettable content that sets off the Social Media Outrage Industrial Complex.

For some publishers, an apology is not enough. They’d rather forget the whole thing took place, erasing the past with a simple keystroke. In the most recent example, Men’s Health took down an article titled “The Secret to Talking Sports with Any Woman” after an online backlash (screengrab below courtesy of Mediaite). 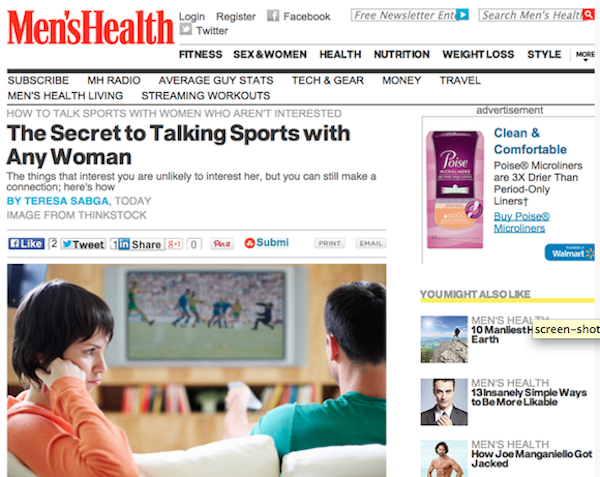 Similarly, Forbes removed a post titled “Drunk Female Guests Are the Gravest Threat to Fraternities” and fired the author, Bill Frezza. (As Frezza was one of Forbes’ outside contributors, the episode underscored the perils of platform publishing.) This past summer, BuzzFeed scrubbed thousands of posts from its site that “didn’t meet its standards.”

Bill Phillips, editor-in-chief of Men’s Health, said that the removed post was originally a sidebar in the October issue titled “Talk Sports with a Woman (Who’s Just Not Interested)” that accompanied a profile of a female sportscaster. When the story appeared online, though, he said, “the headline was shortened, the context was lost, and the reaction from readers was swift. We realized the error, apologized and deleted the tweet and the article.”

Still, it’s one thing to correct or remove an inaccurate post, as Us Weekly did this week when it admitted it wrongly reported Neve Campbell was pregnant, but it’s another to remove a piece of content altogether when it’s controversial or just plain embarrassing.

“I’m not really down with taking down content just because it stinks,” said Kelly McBride, who teaches ethics at the Poynter Institute. “That tells the audience that we journalists don’t really have a good process for creating good content. Instead, we’re just going to take it down if enough of you complain. If the content was bad, then make it better. If the idea itself was not worth defending, then say that and do a counterpoint with what you wish you would have said.”

In a quick survey of other online publishers, some say there are legitimate reasons to take down content and others say there’s no right to be forgotten:

The New York Times
The paper does not take down articles — “with rare exception,” assistant managing editor for standards Philip Corbett told Digiday. “On rare occasions when we have to remove something altogether, we normally would run a note indicating what we’ve done. Examples might include an image that we realized, after publication, we didn’t have legal rights to; or an unedited draft of a story that is published by mistake. In the latter case, if we can’t immediately replace the draft with an edited version, we might remove the text and indicate in a note that the earlier version was posted by mistake, then move as quickly as possible to get an acceptable version ready to repost.”

Slate
Slate doesn’t “disappear mistakes down the memory hole by changing text without appending an explanation of what we’ve done or by unpublishing articles,” chairman Jacob Weisberg said. “We acknowledge our errors, append an editor’s note to the piece and leave it up. An exception might be if something had to be taken down for legal reasons, but I can’t think of instance where we’ve done that. There’s no ‘right to be forgotten’ for flawed journalism.”

GQ
The site has never deleted a post and tries to make sure nothing is posted that demands “insta-regret,” editor-in-chief Jim Nelson said. “We used to publish a column called GQ Regrets, ‘a look at our occasional lapses in judgement,’ which had fun with the whims of fashion, but there’s something that seems wrong about deleting a post,” Nelson said. “It runs both counter to the rules of journalism and to the appetite and demands of the Web (what you erase always finds its way back somehow, only to live louder in infamy). Deleting feels spooky, as if you vanished something North Korean-style.”

Capital New York
Rather than remove a post outright, Capital would try to find a way to preserve it online so that people could see the error that was made, co-editor Tom McGeveran said. “You don’t get to remove the record of error from public view.”

Quartz
The site will correct posts and write notes to readers if necessarily, but avoids erasing the record for readers. “We lean very heavily against taking posts down, because that’s a kind of nuclear option that erases all traces of it for readers,” editor-in-chief Kevin Delaney said. “We’re really committed to accuracy and absolutely include corrections (displayed prominently at the top) when relevant.”

Sports Illustrated
If SI publishes an error, it corrects it and adds an editor’s note in the copy. If it’s a matter of tone or taste, SI would re-examine the content in question and then make a call accordingly, said Paul Fichtenbaum, editor, Time Inc. Sports Group.

New York
The magazine said it has taken down “a handful” of blog posts or art in the last five years in cases where there were legal issues or readers raised legitimate concerns, and added an explanation on the site and/or social media.

reddit
In keeping with its ethos as a free-speech driven outlet, reddit takes a hands-off approach to content. Its lengthy FAQ says it “rarely” removes defamatory material from the site (it tends to leave those decisions to the moderator) but that it reserves the right to do so for legal or other reasons — as it recently did when it took down leaked nude pics of celebrities.