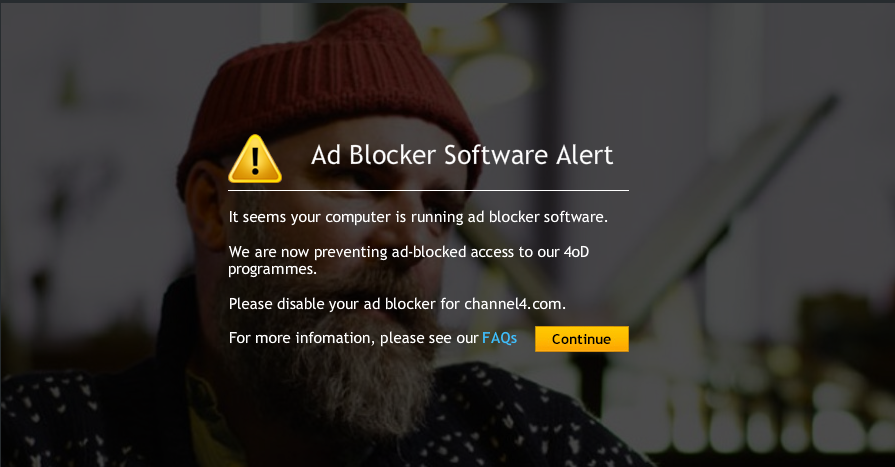 Some publishers believe “education” is the way to combat the spread of ad blocking. Maybe, but others think it’s just a matter of fighting back with tech of their own.

ITV, the U.K.’s top broadcaster, for example, thwarts ad-blocking-software users by completely preventing them from watching its content. Those using ad blockers are politely, but firmly, turned away. The approach is best described as tough love.

“We think you may have software installed that’s blocking the adverts on ITV Players,” reads a message on the site presented to ad blockers. “We understand you may not always want the ads, but that’s how we make money that pays for the shows you love.”

Channel4, another one of the U.K.’s largest publishers, has taken a similar tact for its own visitors. Germany’s Axel Springer has a similar system in the works, according to a source familiar with the matter.

While ad-blocking afflicts the ad revenue numbers of publishers every country, it’s a particularly major issue in Europe, where over 25 percent of users use ad block software, depending on the country.

Publishers are constantly on the hunt for new ways to get around ad blocking software. Ad blockers work by stopping requests to specific ad servers, addresses or page elements, which, when blocked, prevent ads from being displayed. Publishers often get around the ad blocker rules by making minor tweaks to URLs, coding ads directly into their pages or even using URL shorteners. It’s a cat-and-mouse game between the two parties, which are constantly looking for new ways to outsmart the other side.

Ad-blocking-software markets, however, say publishers are on the losing side of the fight — both with technology and morality.

“We have people all across the world writing filter lists and trying to find the circumvention techniques and out-circumventing them. Technically, we have the advantage,” said AdBlock Plus communications manager Ben Williams.

AdBlock Plus, which controls roughly half of the ad blocking market, is also well-known for its “acceptable ads” program, which lets publishers and even tech companies such as Microsoft and Google, pay to get their ads whitelisted by default within the Ad Block Plus software. Its influence has also made it the target of European publishers RTL, ProSiebenSat.1, Axel Springer and Die Zeit, which are in various stages of suing AdBlock Plus parent company Eyeo in Germany.

But while publishers might earn a few pennies each time they force an ad in front of an ad blocker, the open question is whether it’s worth the effort.

“If there is a user who has the perception of ads being annoying and intrusive, forcing the browser to ‘override,’ a tool that the user installed to overcome what he considers a nuisance will not do anything to restore the relationship with that user,” said News UK head of audience and advertising systems Alessandro De Zanche. “On the contrary, it will just make him feel the publisher and advertiser even more intrusive and arrogant.”