5 signs programmatic advertising is taking off 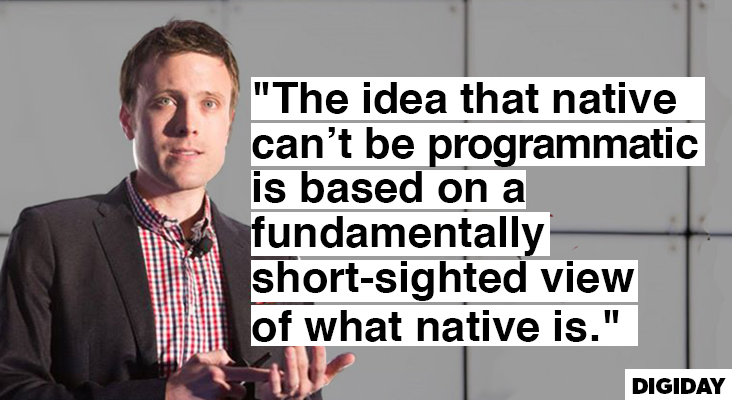 While programmatic advertising is maturing, it’s not without its growing pains. The industry has gone from a niche area of digital to a nearly agreed-upon bulwark of the future media system. The question now is just what shape it takes.

Taylor Davidon, a venture capitalist with the agency-backed KBS+ Ventures, gave his view of where the industry is heading in a kickoff presentation at the Digiday Programmatic Summit in New Orleans. The gist: Programmatic is here to stay, and it’s starting to deal with its challenges to reach full maturity.

“The real challenge around programmatic is not around using the pipes to send more banners,” he said. “Instead, it’s about marrying new formats with content, targeting and data to create a different model for ad deployment that’s native to the experience.”

Marketers are getting smarter about programmatic.
While programmatic’s role is evolving, its place in marketers’ campaigns is limited so far. The Wall Street Journal found in a recent survey that only 23 percent of CMOs understood programmatic advertising enough to use it in campaigns. 12 percent of respondents hadn’t heard of it at all. That’s on its way to changing, though. There might be a lack of understanding of the often confusing nuts and bolts of the programmatic ad system, with it myriad landscape slides, but marketers are realizing it will be an important way for it to reach potential customers.

Programmatic works, therefore it will get more dollars.
Despite the rapid rise of programmatic buying, the  basic rule of advertising remained the same: Marketers and their dollars go to whatever platforms capture the most eyeballs. User behaviors on these platforms, in turn, define the form that their ads eventually take. Banner ads, commonly ignored and clicked accidentally on the Web, don’t work well on mobile, leading ad tech companies to invest in native ad placements that make the most sense.

Native is going programmatic
Automated buying and native advertising are largely viewed as two separate entities. Programmatic advertising has a reputation for being more high impact and brand forced. That dichotomy could end up being a false one, however. Once platforms create ads that perform well, they become scalable, which inevitably means programmatic. “The idea that native can’t be programmatic is based on a fundamentally short-sighted view of what native is,” Davidson said. “‘Native’ is whatever ad unit we have to create to fit the massive sites that we’ve made tremendously popular.”

The challenge, Davidson said, is to create ads that combine relevant content with intent targeting, limited inventory, and first-party data, which, when combined create the sorts of user-centric ads that end up driving performance. This has how marketers can avoid many of the issues have plagued the display ad market.

Platforms have embraced programmatic.
Facebook, in its early forays into advertising, dabbled in the notion of “social advertising.” It preached wooly concepts like “engagement.” No longer. With its exchange, Facebook is now fully embedded in the programmatic world, and it is even producing returns on part with Google search ads, according to Megan Pagliuca, vp of media at Merkle. In the platform world, this now amounts to a playbook. Twitter is following the same programmatic path. Expect other platforms to follow.

“Testing an ad unit after you’ve amassed hundreds of millions of users it’s really important to pay attention to the ads so you don’t damage the actual consumer product,” Davidson said. Publishers don’t want to invest in ads if those ads are going to drive away their user bases.

Programmatic is going far beyond the banner.
Programmatic advertising is synonymous with banner ads. That’s where it began, with the promise that by automating the buying process, infusing it with precision targeting drawing from deep pools of data, banner ads could perform like search ads. That hasn’t completely panned out, but the shift to automating the ad busing is now a foregone conclusion. The success programmatic has had in digital display advertising could be little more than a test bed for its ultimate impact on much richer forms of advertising, including TV spots.

“This shift is forcing us to redefine what programmatic means,” Davidson said.
Check out the full version of David’s talk below.

The State of Advertising Technology from Digiday on Vimeo.