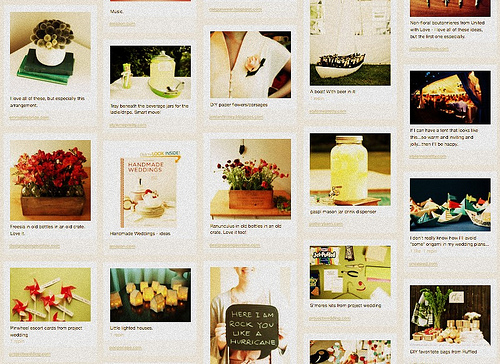 Pinterest Love: Fashion and lifestyle site r29 says that “Are you on Pinterest?” is the new “Are you on Facebook?” Those are big shoes to fill, but yes, Pinterest is really growing in popularity, especially among the female population. Here are r29’s picks for 10 Pinners you need to follow. As you can see, Pinterest really lends itself to the fashion world and anything visual or design related. It’s also another place for bloggers to branch out. Perhaps publishers and brands will follow? R29

Twitter Addiction: It’s harder to resist Twitter than it is to resist alcohol or cigarettes, according to a new study from University of Chicago’s Booth Business School. The study involved 205 people between the ages of 18 and 85 in and around of Würtzburg, Germany. Participants were prompted seven times a day over 14 hours for seven days using BlackBerrys so they could message whether they had experienced a desire within the last 30 minutes, and if so, what type, the strength of the desire, whether it conflicted with other desires and most importantly, whether they resisted or gave in to it. Over the seven-day experiment period, there were 10,558 responses and 7,827 “desire episodes” reported. The researchers found that willpower wore off as the day went on and that the highest “self-control failure rates” reported involved media consumption and work-related activity. On the other hand, researchers found that people were pretty successful at resisting urges to play sports, sexual urges, spending urges and desire for tobacco, alcohol and coffee. It is pretty surprising that people are better at resisting coffee and alcohol and sex than they are resisting the urge to email or tweet. As the researchers pointed out, the ubiquity and low cost of consuming media and engaging in media-related activities like tweeting and Facebooking could be part the explanation. The Guardian

New Annoying Term of the Day: According to Bryan Murley, assistant professor of new and emerging media at Eastern Illinois University, the term for journalist is “information Sherpa.” Jesus. Please say this doesn’t catch on. Poynter

Tumblr of the Day: Who knew the late Korean dictator had such skills on the turntables? Kim Jong-Il Dropping the Bass Video of the Day: Seventh-grader Facebook drama from Facebookpiece Theater: A dramatic interpretation of a real Facebook conversation between seventh graders posted under a photo. The Daily What