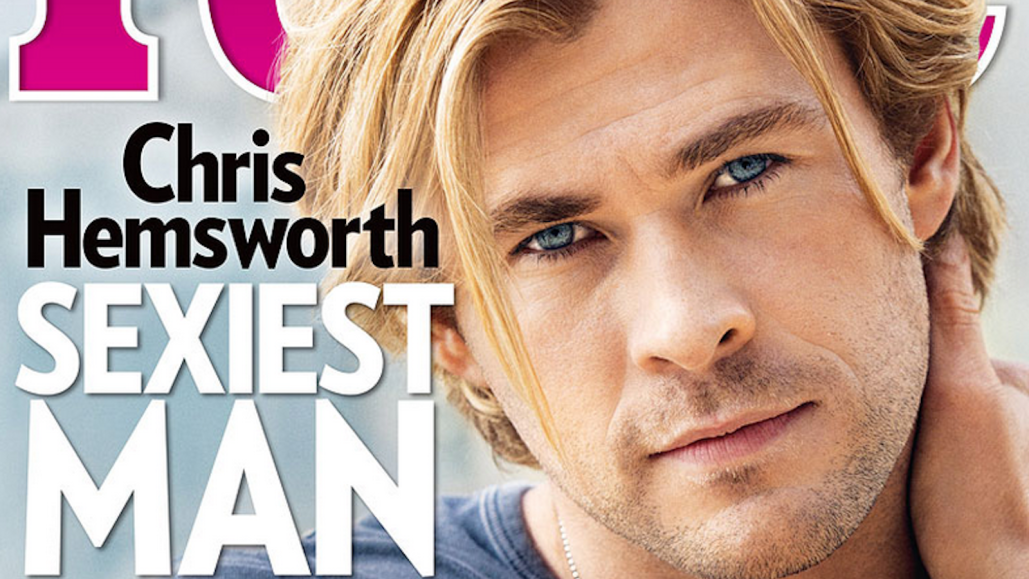 People announced its Sexiest Man Alive yesterday, and while it’s big news for fans of Chris Hemsworth, it’s even bigger for People and its parent company, Time Inc. The Sexiest Man franchise was born 29 years ago when it applied the phrase to Mel Gibson, has been spun into a mini-empire, along with other People specials like the Oscar and 50 Most Beautiful issues.

But not even the world’s sexiest man is immune to the economic realities facing publishers everywhere. People magazine overall has long been the leading cash cow at Time Inc. It’s estimated to have pulled in $1 billion in total revenue, or about a fifth of total Time Inc. revenue and more than half its profit as recently as a year ago, according to knowledgeable sources. Its importance has declined though, as once-reliably strong single-copy sales have fallen off from well over 1 million per issue to well below that, mirroring industry newsstand trends.

Still, Sexiest Man is an important tentpole for the magazine, contributing roughly 3 percent of People’s total magazine revenue, or $30 million. In addition to being one of a kind in the market, timing is a big factor in its success; it falls in the fourth quarter, when advertisers spend the bulk of their budgets, and just ahead of Black Friday, when marketers are trying to reach pre-holiday shoppers.

Average weekly circulation of People overall has declined, to 3.5 million in 2014 from 3.6 million in 2009. In that same period, single-copy sales have fallen more dramatically, to 706,344 from 1.3 million, according to the Alliance for Audited Media.

Sexiest Man has remained a big draw at the newsstand (helped, likely, by the fact that it’s on stands when people are traveling for Thanksgiving), although last year’s, featuring Adam Levine, was a relative bomb, selling fewer than 1 million copies. Sales don’t always correspond with readership, though; on that score, the Adam Levine cover did 19 percent better than the average People issue, according to GfK. Over the past several years, the Channing Tatum, Hugh Jackman and Bradley Cooper issues also did above-average, while Johnny Depp and Ryan Reynolds were at or below.

This year’s Sexiest Man looks more promising, based on the social conversation immediately following the news that was revealed on “Jimmy Kimmel Live!” on Nov. 18. According to Brandwatch, conversation around the announcement racked up nearly 50,000 social mentions in a little more than 12 hours — which is what it often takes trending topics on Twitter several days to accumulate. The official hashtags #sexiestmanalive and #chrishemsworth were the two hashtags most used in conversation, but #Marvel, #abs, #Kimmel, @sma2014, and #thor also were popular.

Shares of the story on People.com peaked in 2012, the year Channing Tatum got the cover. Social conversation for Sexiest Man Alive peaked Wednesday at just under 200,000 Twitter mentions, according to Crimson Hexagon. The most talked-about Sexiest Man Alive of the past five years was in 2011, when Bradley Cooper got the title, with 295,834 mentions. The next highest volume was in 2013, with 105,287 posts, when the honor went to Adam Levine. Third place was 83,353 in 2012.