News app Circa, 4, has died 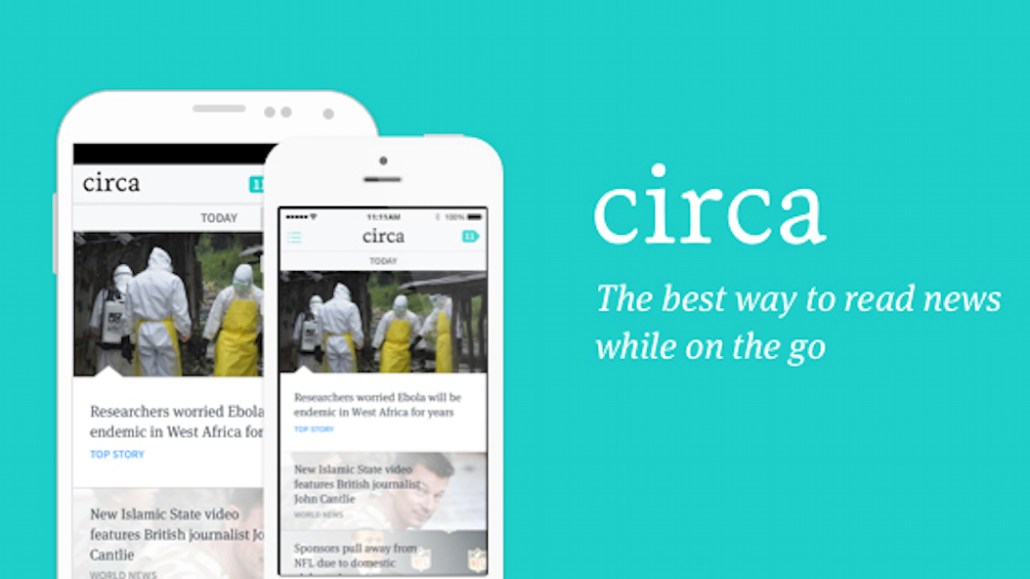 Circa, the app that claimed to revolutionize the news by using short sentences, has died. It was 4 years old.

Survived by its co-founders Matt Galligan, Ben Huh and Arsenio Santos, the news app had been on life support since April when it was revealed that it was looking for prospective buyers. It died on Sunday when it published its final story about endangered porpoises. The cause of death was determined to be lack of funding.

The family announced the death this afternoon on Medium, writing it’s being put on “indefinite hiatus.”

Circa admitted that it could no longer afford its large staff to write small pieces of news. “Our ongoing plan was to monetize Circa News through the building of a strategy we had spent a long time developing but unfortunately we were unable to close a significant investment prior to becoming resource constrained,” wrote Galligan.

Circa launched with high hopes of revolutionizing the news. “We’re trying to make it so that people educate themselves for five minutes as opposed to play Angry Birds,” Galligan told TechCrunch in 2011.

The app raised $8 million and won a lot of awards, including Best App of 2013 by Apple and Google. This year looked to be Circa’s biggest year yet with the company promising to make money by introducing native ads to the app.

News of its passing was first announced by Fortune, which reported that Circa had run out of money, underscoring how difficult it is to make news on mobile work and be profitable.

“The problem with Circa is, it was an elegantly executed point solution, but it was not compelling,” news consultant Alan Mutter told Digiday. “They advanced the ball a few yards in tracking what the reader’s already read. But that one little innovation wasn’t enough to make it compelling. Anyone that’s in the news app business has just been big-footed by the big online platforms, Facebook, Apple, Google. These are Flipboard killers, Circa killers, Ozy killers.”

Even though were rumors of interested buyers, a guardian angel never materialized.

Services are currently being held on Twitter, where mourners are paying their respect.

Sad to see the end of @circa https://t.co/qN2Rls3dVW

Circa is gone, but we will surely see its approach to mobile (smart notifications, modularisation) more and more https://t.co/W75pDaKj8W

We should celebrate things like @circa and people like @AntDeRosa for trying something new and pushing. Sad it ended https://t.co/kIxJhr7Mu6

Kind of appropriate that the post describing the death of Cir.ca is one giant blockquote https://t.co/cEE5cfGykp — Joel and 9 others (@joeljohnson) June 24, 2015

Lucia Moses contributed to this report.