The New York Times is experimenting with mobile-specific headlines

After 10 months of A/B testing its headlines seriously, the New York Times has started slicing its audience into finer segments, albeit informally.

Last week, a story about airlines abandoning their in-flight entertainment systems got two headlines, one of which spoke directly to the fact that readers were likely holding the reason that airlines were making that move: 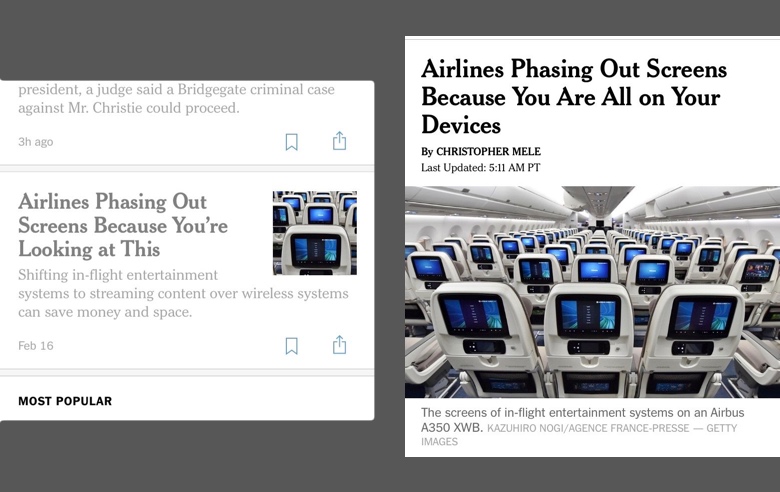 “I’d love to see us doing more of that in the future, when we can,” said Mark Bulik, a senior editor at the Times who heads up its headline-testing operations.

The headline, which helped drive 26 percent more clicks on mobile, was just an experiment. But it’s a step forward for a project that began in April 2016, when the Times tasked a two-person team with optimizing its headlines, a practice that’s become standard operating procedure in digital media over the past several years.

While headlines have always been important to publishers, the emphasis on testing them has grown as publishers have grown more reliant on social distribution for traffic. The right headline can drive exponentially higher traffic to a story, which is why publishers big and small are optimizing their headlines not just on social media or their owned and operated properties but inside third-party recommendation widgets like Taboola too.

What’s less common is optimizing by device. While some publishers have toyed with using different headlines inside their mobile apps, fewer are showing headlines to mobile readers that differ from the headlines shown to readers accessing their sites from desktop computers, or from the ones that appear in newsletters, which are getting more important all the time. Most haven’t taken the step because muddling through reader data on that level requires dedicated analytics and support for the work.

But sweating those details will become necessary as publishers get increasingly serious about personalization. A growing number of them are intrigued by the concept but lack good data and clear incentives to pursue it fully. They have taken baby steps toward correcting those problems, now that most publishers and their newsrooms have gotten past the idea that optimization is the first step down the road to clickbait.