The New York Times has been producing increasingly elaborate native ads online, and now it has gone a step further by extending the format to print for the first time.

The ad, for Shell, is set to appear in print and online Wednesday, and it’s a far cry from the advertorials of days past. First, the size: The print component is an eight-page section that’s wrapped around home-delivered copies. (In the case of newsstand copies, the ad wraps the business section.) The top sheet is opaque vellum, for extra effect. The print creative extends the Web version, with infographics that show the urbanization of the world’s population. In what the Times called “icing on the cake,” the print ads are enhanced by augmented reality, so that people using the Blippar app can initiate a video by holding their phone over the page.

Here are the first two pages of the ad, including the vellum overlay: 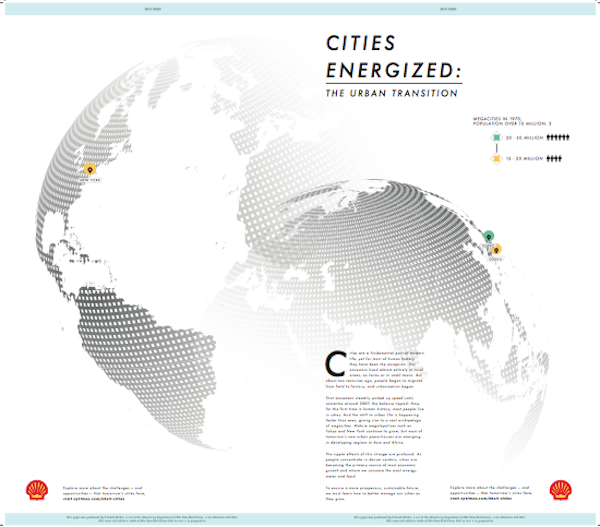 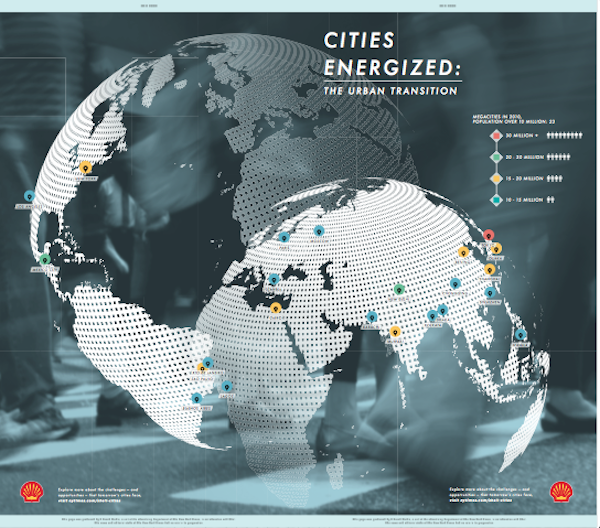 So-called native ads, which mimic the look and feel of editorial, have largely been an online phenomenon, because the Web offers more multimedia capabilities than print. The print edition has always been treated with kid gloves compared to the Web anyway, where ads have been more intrusive. This is especially true at venerated news organizations including the Times, which have been sensitive to criticism that native advertising, by its very nature, is trying to trick the reader into thinking it’s editorial content.

Native ads, then, have been slow to come to print (although some would say they’ve existed for decades, in the form of fashion magazine ads and advertorials). The Washington Post ran its first print native ad in October, also, as it happens, for Shell, but other than sharing the same physical space as news articles, the ad didn’t match the editorial quality of the host publication, which many would say is a crucial ingredient of native ads.

It’s not that the demand isn’t there. The print format is ideally suited to storytelling that’s the hallmark of a lot of native ads, but traditional church-state separation has stood in the way, said Jakob Reich, digital media manager at MediaCom, Shell’s media agency.

Meredith Levien, evp of advertising for the Times, said the Times has fielded interest from advertisers but hasn’t run a native ad in print until now because the ads in question weren’t worthy of the real estate.

“We wanted to do branded content at the highest level possible to capture the reader’s attention in a manner that’s befitting the Times,” she said.

The Times Shell ad is the latest so-called “Paid Post,” the Times’ native ad product that began appearing exclusively online in January. The ad was created by T Brand Studio, the Times’ in-house native ad production arm. The studio is now up to 21 people, and the Times said it has plans for more hires.

With the Shell ad, the Times went further in using the multimedia that first appeared in Netflix’s “Orange is the New Black” and Cole Haan Paid Posts. The explainer-style ad includes two four-minute videos made with the aid of a drone and video overlaid with graphics. Animated GIFs are used, borrowing from the newsroom treatment that was used in this Derek Jeter story. The campaign is part of Shell’s goal to establish itself as a thought-leader on the subject of energy needs, and as with much native advertising, mentions of Shell are minimal. All told, the process took three months.

Still, most Times readers are likely to see the Shell print ad as just a print ad, albeit a very big one. But extending the Shell campaign to print is a way to add legitimacy to the native format, said Sebastian Tomich, vp of advertising at the Times.

“A lot of the conversation was, is this the return of advertorial?” Tomich said. “This is not the case. We are truly bringing a new story to our readers from Shell.”

The Times and MediaCom declined to say how much the campaign cost. It’s safe to say it’s at the high end (if not higher) of the range of up to $200,000 that the Times charges for content creation alone for Paid Posts, Capital New York reported.