NBC News has started to roll out two new kinds of display ads that are designed to meet advertisers’ demands for viewability.

The ads, which NBC developed in-house and are initially visible on two verticals, Mach and Better, are a custom display unit and a “ping pong” unit, which rolls through a sequence of images as a user scrolls down the page. Both remain in reader view for longer than the IAB-required one second, at a time when many publishers are doing the bare minimum when it comes to viewability. The custom units resize themselves for any device and are part of a trend toward custom display units. So far a major advertiser has bought some of the ping pong units, though a company spokesman declined to specify which one.

The idea is to make the ads more distinct and hence more valuable to advertisers. “Marketers are looking to publishers to help them find interesting ways to tell their stories,” said Nick Ascheim, NBC News’s svp of digital. “And because the new design provides such a visually rich environment, we expect to see higher engagement with both the ads and the content, which is a win for us and for our advertising partners.”

Those new units – see above for a GIF example of the immersive unit – are part of redesigns meant to get people to engage with both sites for longer periods of time. That meant including features like a video player that allows visitors to watch an unlimited number of videos with just one pre-roll ad and a front page that will let readers see an entire story on the site’s homepage without having to click through on an article page.

Where an early version of the site presented readers with a wall of article options, the newer versions of Mach and Better give editors the flexibility to show visitors a lot of information from one story right away. 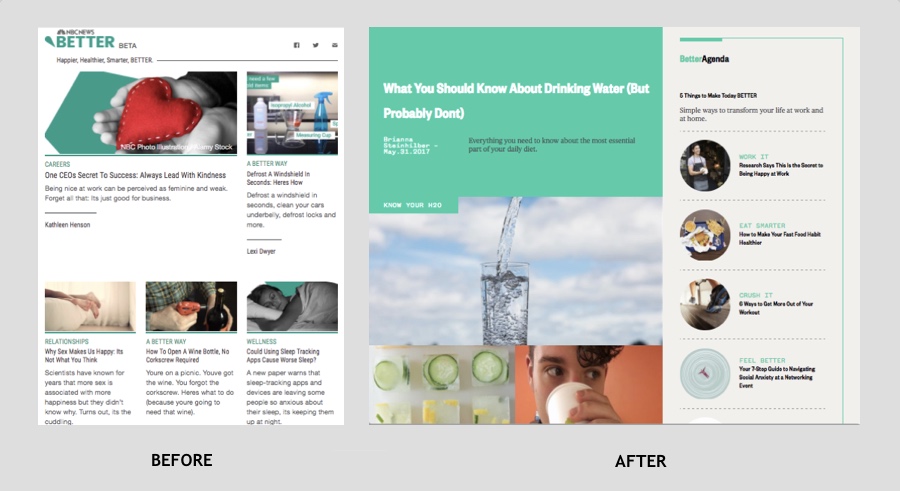 The designs, which NBC News did with Code and Theory, were made using a template that will also allow NBC News to roll out additional vertical sites more quickly. A third vertical, Think, is slated for launch in a few weeks, and additional, not-yet-named sites are in the pipes.

“We’ll more quickly be able to add new pages, verticals and more, without having to solve the same design problems multiple times,” Gimbel said. “Certainly, some aesthetics will change, but the core of the design will remain, and it will be less time consuming than reinventing the wheel.”