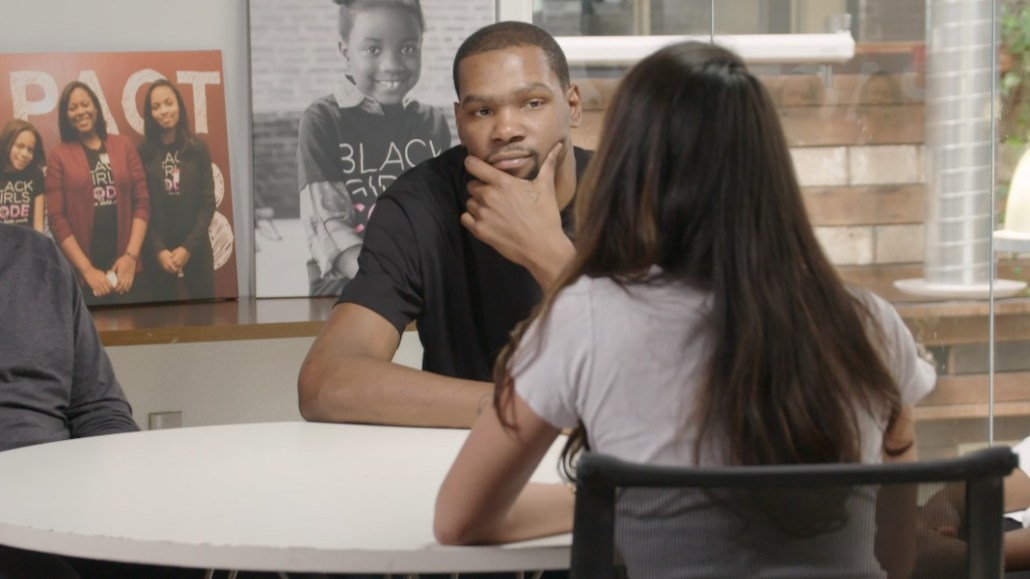 Celebrity-led media companies may be easily lampooned as vanity projects, but for Kevin Durant’s Thirty Five Media, it’s an opportunity to diversify the NBA star’s existing business with sponsors and set him up for a future outside of the spotlight.

To that end, Durant has parlayed his endorsement deals with companies like Nike, Alaska Airlines and American Family Insurance into branded content deals for his media company. For example, on Aug. 21, Thirty Five Media premiered an episodic series on Durant’s YouTube channel that features American Family Insurance as the show’s presenting sponsor, as opposed to Durant pitching on the insurance company’s behalf.  These deals are not only about accelerating Thirty Five Media’s business with advertisers, but extending the reigning NBA Finals MVP’s endorsement deals and the scope of those deals.

“Moving forward, I think more of the brands will be just working with us as a media partner and less as just a part of Kevin’s sponsorship deal,” said Durant’s business partner Rich Kleiman.

Thirty Five Media is part of a larger organization that includes Durant’s investment arm, The Durant Company, and his philanthropic arm, the Kevin Durant Charity Foundation. Seven people, including Durant and Kleiman, work across the three divisions, said Kleiman. Thirty Five Media isn’t interested in producing content for hire like an agency would. “It would have to have a real tie-in to what we’re trying to do,” said Kleiman.

Early into Durant’s NBA career, he struck more traditional endorsement deals, which involved him starring in commercials, mentioning a company or its products on his social accounts and appearing at company events. But that’s all changed as Durant enters his 12th season in the league. Now, Durant isn’t looking to just make Thirty Five Media a part of his endorsement deals; he’s making it a primary one.

When it’s time to renew an existing deal, Durant and Kleiman are looking to strike agreements with terms that include Thirty Five Media producing content for the sponsor. “I think we would say to a company we were renewing with, ‘We need to make this deal with Thirty Five Media first,’” said Kleiman. In cases when an existing endorsement is not yet up for renewal, Durant and Kleiman sign a separate content production deal with the sponsor that has its own budget.

Thirty Five Media isn’t the only celebrity-led media company to capitalize on an association with the famous in order to bank branded content deals. Kevin Hart’s Laugh Out Loud recently parlayed the comedian’s yearlong sponsorship deal with Mountain Dew Kickstart to incorporate the beverage company into its episodic series “Cold as Balls.” And Derek Jeter’s The Players’ Tribune has used its relationship with athletes to secure them as talent for the branded content the company produces for advertisers.

The inclusion of celebrities’ media companies in their endorsement deals brings more opportunities to the table for individual advertisers, but it can also bring more advertisers to the table. If a deal is primarily with the media company, then the celebrity doesn’t need to be as involved as in a traditional deal. LeBron James has served as a template of this endorsement-by-association arrangement. His media company, Uninterrupted, has produced original shows sponsored by Uber and JPMorgan Chase, with some episodes that may involve but do not star the Laker legend-in-waiting.  Thirty Five Media sees an opportunity to do something similar through Durant. “That opens up a lot more opportunity because we have a whole company that can work with them in creating content and distributing it. And Kevin can still work with them without having to give them his actual time, which is so precious to all these athletes,” said Kleiman.

Thirty Five Media isn’t only about expanding the way that Durant works with companies today. It’s also about setting him up for working with companies after his NBA career has ended. Case in point: “Dream to Achieve,” the episodic series sponsored by American Family Insurance. In addition to extending Durant’s endorsement deal with the insurance company, it’s also a vehicle to promote other companies with which Durant has a relationship. The show’s first episode featured the CEO of Forward, a health-care startup in which Durant is an investor.

“The way in which Kevin interacted with a brand in the past is not the way he would do it now. Now it’s about finding companies he can work with for the next 15 to 20 years,” said Kleiman.