Native ads are getting a direct-response makeover

Native advertising is often used by publishers as a way out of being held to the direct-response metrics that have long been associated with banner ads.

Native was supposed to be a premium ad format that would bolster falling digital CPMs, and it has mainly been viewed as an image-building format. But it was only a matter of time before advertisers would start to demand more than just a lift in awareness or improved reputation and ask for ads that directly drive sales or leads.

Case in point: this ad for The New York Times that’s running on Mashable. The ad has a direct come-on to new digital customers, with a “subscribe” button that’s prominently placed to the right of its branded article. It’s part of a month-long campaign the Times is running on Mashable to drive audience growth.

The practice is more established among B2B marketers, for whom the format is well suited for white-paper downloads and webinar signups. Lexis Nexis, for example, used this ad on Law.com to drum up business for its MedMal navigator product. But consumer publishers are increasingly hearing requests for native ads to include calls to action.

The Huffington Post recently launched a new ad product called a Collage Post that’s designed for advertisers that want to drive purchase. For eBay, the Huff Post created an ad that included product links whose click-through rates could be tracked.

“More and more, we are being asked to move the needle on sales directly,” said Lauri Baker, vp, brand strategy and sales and head of branded content for the Huff Post.

Steve Rubel, chief content strategist at Edelman, echoed that comment. Clients “increasingly want to understand what direct-response applications it might have,” he said. “They’re realistic that it’s not going to be as rich as Google or search, but I think they’re hopeful it could become something more than brand awareness, and they’re looking at lead generation in particular. There’s interest in proving this is not just a top of the funnel.”

Native ad platform Polar recently looked at click-through rates for text links or images with a hyperlink on sponsored content pages. Looking across about a dozen campaigns from various publishers that have run this year, click-through rates ranged from 1.5 percent to 9 percent, according to Kunal Gupta, CEO of Polar. That compares favorably to the under 1 percent CTR of banner ads.

A number of campaigns consistently had CTRs in the 2.5 percent to 3 percent range, he added. “We think a CTR of 2.5 percent on CTAs is a good baseline for measuring the success for campaigns going forward,” he said.

In a sense, this is a match made in heaven. Banner and paid search have been the domain of performance-based ads, but their response rates are notoriously low. Direct response may conjure up images of junky come-ons. But its measurability and trackability can’t be disputed, and it still gets the biggest share of the online advertising market (60 percent). The format, however, is ripe for a makeover.

Meanwhile, native ads — not the ones in content-recommendation widgets, but the feature-length prose that’s written and designed to match the look and feel of the host site’s editorial — have always defied easy performance evaluation, not least because native lacks a standard definition. It’s primarily been measured in the language of publishing (pageviews, social shares and likes) rather than in the language of marketers, according to a recent Contently survey, even though publishers have gotten more sophisticated about measurement.

But at the end of the day, marketers want to sell more product, and publisher metrics alone won’t do it. While 73 percent of marketers had brand awareness as a goal, lead generation came second, at 47 percent, per the Contently survey. Native’s ability to influence purchase is the second-biggest metric marketers want (55 percent), after its ability to influence opinion of the brand (60 percent). So comparatively speaking, the appearance of call-to-action buttons in ads is a big step in the evolution of native.

Blending direct response and native isn’t necessarily easy for publishers, who may now have to build another element to be incorporated into the ad unit. And now they have to worry about the ad delivering actual results. On the other hand, if it works, publishers could charge a performance-based premium.

Gawker Media is one publisher that’s embracing the trend. Erin Pettigrew, vp of business development for Gawker Media, is exploring a product for merchants and services that are looking for sales and lead generation, with the result being experiments like this one for grocery-delivery service Blue Apron and this for a computing class from Stack Social. Pettigrew said she’s “very proud of the upper-funnel native work” Gawker does but that she sees the definition of native widen to include other types of non-banner ads. 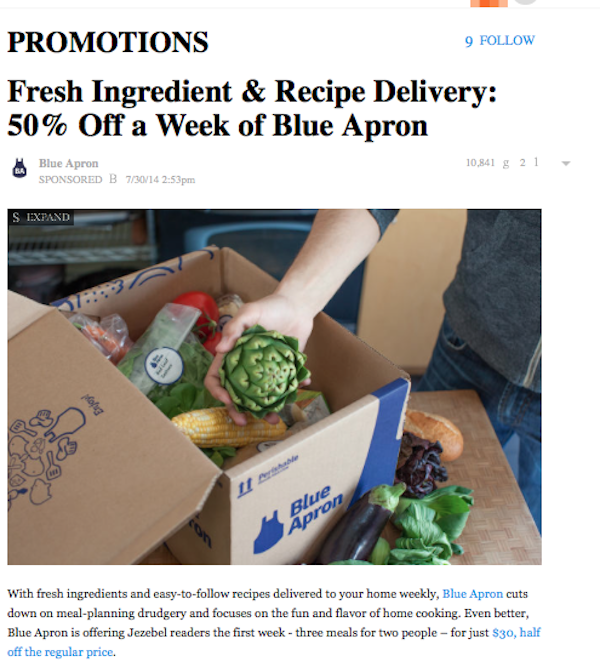 “Display has been the way to do performance marketing like this with publishers in the past, but effectiveness and response rates have declined in that creative format,” she said. “So what does a more scalable paid performance offering look like as it goes beyond the banner?”