Native ad of the week: The Atlantic’s ‘The Ascent’ for Netflix’s ‘House of Cards’

Netflix is quickly making a name for itself as a native ad pioneer, back with another elaborate native ad campaign, this time to promote its popular original series “House of Cards.” The streaming-video service ran a campaign for “Orange is the New Black” in The New York Times last June, with a slick design and a multimedia storytelling approach that left even skeptics impressed.

Netflix’s new native campaign, “The Ascent,” continues in that vein, with a long article, video and infographics about the partnerships between U.S. presidents and their spouses. Below, an analysis.

The Background
The campaign promotes “House of Cards’” Season 3. It’s curious that the campaign is hitting now when the full season has been available on Netflix since Feb. 27, but its purpose could go beyond promoting Season 3 to driving awareness of the Netflix brand in general at a time when there’s more competition for video-streaming options. (Netflix declined to comment on the campaign.) Indeed, according to Sam Rosen, vp of marketing for the Atlantic, the goal was to increase loyalty with existing viewers in addition to attracting new ones. “By aligning ‘House of Cards’ with great content that people love, we’re not just encouraging people to watch a show, we’re also helping to build their relationships with [main characters] Frank and Claire Underwood as characters and thus, ‘House of Cards’ and Netflix more broadly,” he said.

Who Did It
The campaign involved five people from the Atlantic’s 15-person branded content team, Re:think, who worked on the campaign for three months. The Atlantic didn’t disclose a figure, but Netflix reportedly paid six figures for the campaign. Publishers like native because it’s a way for them to get out of the low digital CPM trap and charge premium rates. But while clients want increasingly sophisticated campaigns, they don’t necessarily want to pay publishers hefty production costs for campaigns that aren’t scalable.

The Approach
As with the Orange campaign, branding is subtle. Netflix and “House of Cards” aren’t mentioned in the main feature, but it’s the subject of an embedded feature that analyzes the private conversations of the Underwoods — all to present the subject in a sophisticated way that would likely appeal to Atlantic readers without taking away from the main story, said Rosen. The risk in the subtle approach is that the advertiser’s association is lost on the reader — or worse, that they make the connection, only to feel like they’ve been deceived. 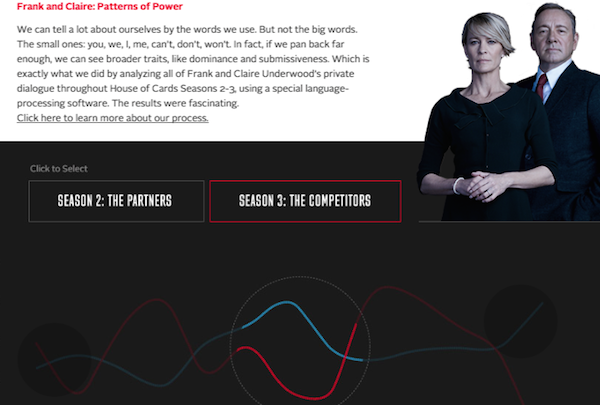 Disclosure
Two years ago, the Atlantic was publicly shamed when it ran sponsored content from the Church of Scientology that was a poor fit with the publication’s intellectual tradition. The Atlantic realized its many mistakes, including not working closely with the advertiser, and tightened up its policy governing native ad policy. The Netflix ad carries a prominent “sponsor content” label that contains a link to that policy and stays in view as the reader scrolls.

Distribution
The campaign is being distributed by the Atlantic, which naturally limits its reach. The site had 11.8 million uniques in February, per comScore — hardly huge, by Internet standards. The Atlantic also is promoting it via Re:think’s Twitter and Facebook accounts (637 followers and 1,967 likes, respectively), with organic and sponsored posts. Once the campaign is over, it will live in perpetuity on TheAtlantic.com.

Verdict
The campaign is entertaining and topical and relevant to the Atlantic’s core audience. “The Ascent” brings history and pop culture to life while keeping the publication’s editorial lens intact, said Andy Seibert, managing partner of Imprint, a Sullivan Content Lab. The Atlantic halo could help Netflix with prospective and existing subscribers alike, added Ben Kunz, vp of strategic planning at Mediassociates, a media planning and buying agency. But the challenge with it, like all native, is scale and repetition. “It takes frequency to change people’s behavior,” he said. “You have a one-time frequency. It’s not easily repeatable. If native is about becoming relevant, this does it but is truly hard to do.”