The Monocle Approach to Native Ads 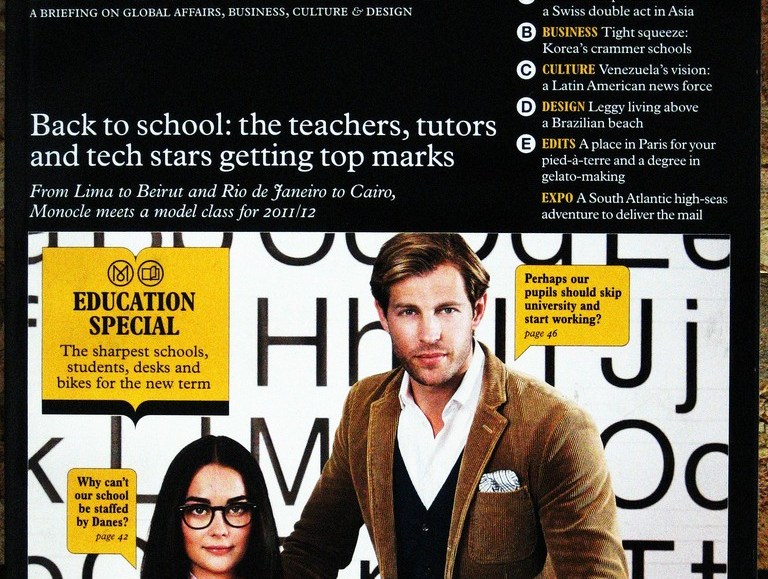 Monocle, a global affairs lifestyle magazine, publishes just 10 times a year. A recent visit to its website, which is updated frequently, would have brought you face to face with a photo of a New York-based entrepreneur named Adam Tarlow, along with a short bio. The content took up nearly all of Monocle’s above-the-fold real estate. And while it may have looked like a tease for an in depth profile the likes of which Monocle frequently runs, it wasn’t. Rather, the homepage experience was just one component of a sophisticated campaign paid for by Samsung, and an example of Monocle’s all-in – and lucrative – approach to native advertising.

Just don’t let them hear you call it that.

“We absolutely never, ever use the term native advertising,” Monocle editor in chief Tyler Brûlé told Digiday, calling the expression a “bizarre, North American piece of marketingism.” But whether you like the term or not, Brûlé’s company is, in the words of Skift CEO Rafat Ali, teaching a “masterclass” in it.

In a blog post on LinkedIn, Ali  – who learned a thing or two about digital publishing after years at the helm of paidContent – described how his team at Skift, a new online publication, listed the best examples of native advertising. He found Monocle leading the pack. Monocle’s native ads, produced in collaboration between advertisers and Monocle’s design team, are “stylish, interesting and highly readable,” said Ali. “These integrated ads and the creative approach they take offer many lessons for the media and advertising world at large.”

One of the examples Ali pointed to was a  two page spread for a Hasselblad camera. The spread contained five striking photos of the camera and neatly laid out ad copy. (Sample line: “”A definitively luxury camera for professionals and amateurs alike – and perhaps even an astronaut or two.”) On the bottom, a simple “Hasselblad X Monocle” declaration let readers know the ad was a collaboration between the two.

The work was done by a team of six within Monocle that handles all of Monocle’s editorial design work as well as its native ad production. According to Brûlé, of Monocle’s 300 pages in its most recent issue, 60 were native ads produced by Monocle (though Brûlé prefers to call it advertorial).

If the company’s infrastructure  blurs the church-and-state divide between editorial and sales, it’s by design. Editors accompany ad directors on sales calls. “I’m of the opinion that all good journalists are good salespeople too,” Brûlé said. While the ad team discusses pricing and tries to close the business, editors give Monocle’s potential clients insight into the publication’s editorial calendar and explain the reasoning behind certain editorial decisions.

Once the client buys in, Monocle’s team then works with them on the concept, produces illustrations, and executes the final ads with their input. The result is an advertisement that meshes with the magazine’s look and feel and aspires to be appealing to readers. All the ads are labeled vaguely – with the brand’s name, followed by “X Monocle” – but leave it to the readers to figure out what that means.

Brûlé said the collaboration allows Monocle to make bold moves, like giving over its homepage to Samsung for a time. “Ultimately Samsung had to sign off on it, but we’re the ones who delivered the final film to them,” Brûlé said. “This is something which has been produced by us, it’s our photo director, it’s our broadcast director who has overseen this. We know that visually it’s not going to look out of sync totally when you click through to it.”

While Monocle itself seems to have escaped criticism for having its ads resemble editorial, the practice itself has come under fire in some quarters. Andrew Sullivan, a particular harsh critic put it this way when critiquing BuzzFeed’s ads: “If journalism is not understood to be separate from advertising, then it has lost something incredibly important in a democratic society.”

But the financial incentive for Monocle’s line-blurring, Brûlé said, is significant. The Samsung campaign brought in roughly one million dollars and native ads can, depending on the month, account for up to one quarter of Monocle’s total revenue.

Citing another full page web ad he recently saw in The New York Times, which popped up before a royal baby article, Brûlé, noted the similarities, took a step back and put it all together: “This is the direction that the web and digital need to go in if it’s going to sustain itself.”