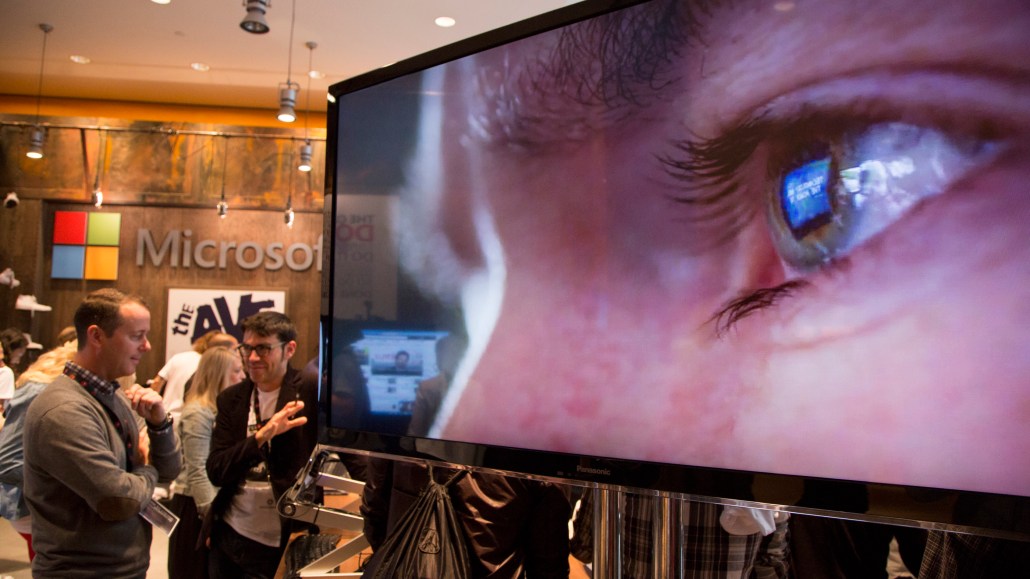 Tech companies are typically secretive about what their interdisciplinary research and development look like, but Microsoft put its lab, The Garage, on public display last week in New York at Advertising Week.

Placed immediately to the right of the entrance to the Times Center, the wood-paneled garage featured the latest in Microsoft technology, from tablet computers the size of large flat-screen TVs, to Surface tablets used to design custom sneaker designs to Eye Gaze, a device that tracks a person’s eye movements, thus allowing them to (among other things) tweet using nothing more than their gaze.

The Garage, while a small installation, is emblematic of Microsoft’s new strategy for wooing ad agencies and, in turn, their clients’ media dollars. Over the past several months, Microsoft has been outfitting agency execs with its various devices, hoping they will familiarize themselves with the technologies to the point that they can develop unique campaigns for them.

“It’s an extension of culture that we have in other parts of the business,” said John Piontkowski, east regional manager of Microsoft’s advertising business. “We’re taking a deeper-level approach to it over the last couple of years.”

Not said but clear is the uphill challenge Microsoft faces among agencies more apt to tote around iPhones or Android-powered devices than a Windows 8 phone. And if Microsoft ever wants agencies to be as enamored of its suite of devices and ad products, it first needs those people to use them, even if that means giving them away. (XTeamers, Microsoft’s agency ambassadors,  are expected to return the goods after a year.)

To remedy that, last December, Microsoft launched The Microsoft eXperience Team, a group of 15 agency execs who were outfitted with Surface RTs, Windows 8 phones, Windows 8 computers and Xbox Ones.

“It’s one thing to come in and say, ‘Hey, check out Xbox and see this new ad that we have.’ It’s another to give them the technology and let them live with it,” Piontkowski said.

Part of the goal was to turn these execs into Microsoft ambassadors within their own agencies, where they’d inform various teams of how to incorporate the devices into different campaigns.

XTeam member Kelly Fisher of DigitasLBi said the initiative already has the agency thinking about running holistic campaigns across Microsoft’s suite of devices.

“In the past, it was primarily Microsoft’s sales and planning teams meeting with our media teams,” Fisher said. “Now we have access to people from Skype and Xbox, people who have more insight into the products themselves rather the banner ads being sold. And it’s a great opportunity as we look at cross-device campaigns.”

And while other device companies conduct educational sessions with DigitasLBi, none of them has as close a relationship with the agency as Microsoft, to his knowledge. The initiative has so far resulted in few tangible results, though; DigitasLBi is still only in the planning stages for unique campaigns to run on Microsoft devices.

There’s a branding element to the initiative as well, too. Microsoft, an also-ran brand in the mobile device industry, wants to introduce trendy, tech-savvy agency types more prone to using Apple and Google products. Microsoft has even has even had xTeam participants blog about the wonders of shifting to Microsoft devices, each post a de facto native ad for Microsoft.

“It’s interesting to see the eye-opening experiences that come when using these devices. And then I have to shift back and forth from an Apple device,” Josh Mallalieu, partner at Microsoft roster agency Universal McCann and xTeam member, told Digiday. “People are becoming far more open to it because they’re understanding the power and impact.”

Mallalieu added that his agency was planning to debut in the fourth quarter a campaign tailored to Microsoft devices. Fisher, however, said DigitasLBi was only in the planning stages of unique campaigns.

So while Microsoft’s agency outreach has impressed some on Madison Avenue, the return on those efforts has been less tangible.