MetaFilter calls to mind  a bygone Internet age. Launched in 1999, the quaintly self-styled “community weblog” is a general-interest forum where its fiercely loyal users share links and engage in generally troll-free discussions. Think of it as reddit for grownups.

Problem is, it’s tough to be a grownup online these days. Earlier this year, MetaFilter was forced to lay off two of its seven moderators because a 2012 Google algorithm tweak eroded the site’s traffic — and revenue — by 40 percent. While MetaFilter’s traffic has since risen back to its pre-dive numbers, the ordeal underscored the danger of a publisher relying on a single platform for most of its traffic.

“It’s about freaking time, really. I was trying to do this in 2008,”said MetaFilter Founder Matthew Haughey. “I should be doing this every three or four years.”

Haughey, 42, talked to Digiday about the perils of Google, publishers’ current problems with Facebook why he’s already a fan of social network Ello.

It’s a been a few months since the layoff announcement. How are things now?
It’s improved greatly. After my post, Google made some statements about how they penalized 30 sites, mostly forum-like sites that they didn’t mean to. That eventually got better. Traffic is probably close to where it was a few years ago before this all happened. So, yeah, things have gotten a lot better. The strange thing is that revenue is a third or a half of what it was two years ago, just because the ad market overall has gotten steadily worse.

For publishers, Facebook today is what Google was yesterday. Isn’t the over-reliance on any single platform really dangerous?
[Laughs] Well, I’m living proof of that. There are some basic guidelines that you’re not supposed to have 60 percent of your revenue from a single source. You need to diversify with everything. There was a time where 90 percent of my income was coming from Google, so when shit hit the fan, it was awful. Over-reliance on a single platform is risky, especially when these platforms have lifespans of two to three years. Twitter and Facebook will be around for a very long time and even if they don’t disappear, it’s clear that people aren’t going to be starting at Facebook forever.

Why do you think that publishers haven’t learned the lessons about Facebook that everyone did about Google?
I don’t know. They should, right? The Upworthy thing, for example. There are still so many clones of Upworthy on Facebook that I can’t tell what’s a viral site and whats a clone of a viral site. Maybe it’s human nature. How is Facebook going to get rid of human curiosity? Those click-bait headlines are written really, really well. I did have a worry even years ago that if this magic Google money from the sky disappeared, we’d have a problem.

But MetaFilter itself was designed for the search era. How do you stay relevant in an era where all the growth is coming through social?
It’s tough. There’s no easy answer. Facebook is not so great for us, though we syndicate the most popular content. There’s minimal uptake, though Twitter’s a bit better when we tweet out titles of popular posts. But there’s no magic answer.

It’s the same problem About.com has. People are searching for help, but not necessarily sharing what they find.
Yeah, but Metafilter is this weird old Web thing and we’re very small outfit of only five people. I’m OK with being this relic of the Web where people have to go and stick around. About.com probably has hundreds of employees and was this real company. I have no idea what their future strategy will look like. 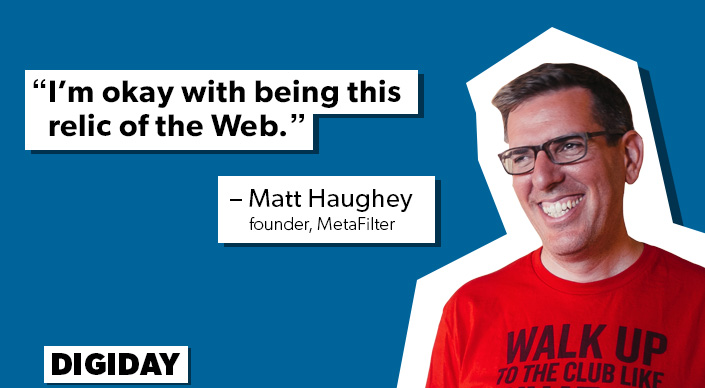 Why keep MetaFilter so small, when the Internet wants everything to be big? Why push against that?
Of the communities that I’ve been a part of, the ones that stuck around have  always been the ones that stayed small or tight in some way. The ones that spiral out tend to disappear. Friends tell me that I could have made decisions in 2002 to go the crazy route and try to be Tumblr or something and grow. I’m a simple person and I want my balance sheet to fit on a single excel sheet that I see on one monitor. I didn’t want a community to feel so big that it started to feel anonymous where you didn’t know other people.

You sound like you’d be a fan of Ello.
I think it’s cool. It should be something Facebook and Twitter monitor very closely. There’s something wonderful about taking away all the crud and starting over.

MetaFilter has been around for 15 years. Do you think it’ll be around for another 15?
I ask myself that a lot. Will I be doing this in 2020, or will the site still be around then? I have no idea. I would hope I would come up with some other good ideas by then, but as long as this keeps working way, I’ll stick with it.