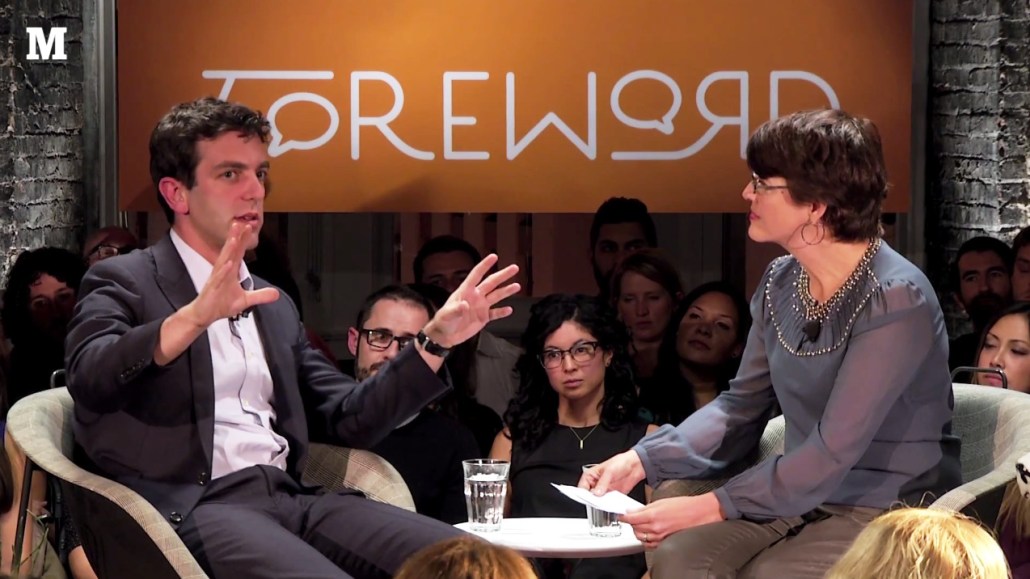 Like most of the publishing world, platform-publisher hybrid Medium has started to produce original video. But while others chase millennial eyeballs with attention-grabbing click-bait, Medium’s debut video series caters to a decidedly older, more patient crowd.

On Wednesday, the publisher-platform hybrid premiered the inaugural episode of “Foreword,” a weekly conversation series with authors and writers. Shot in front of a live audience at Medium’s San Francisco headquarters, the first episode features actor and author B.J. Novak (best known for “The Office”) discussing the link between humor and tragedy in a lengthy 26-minute conversation with host Kelly Corrigan. Future episodes will feature writers such as Margaret Atwood, Nick Kristof and Mary Roach. Right now, Medium plans to produce at least 12 episodes, each around 10 to 20 minutes.

“‘Foreword’ is completely aligned with what Medium is all about: thoughtful stories and ideas from writers,” said Edward Lichty, Medium’s head of corporate development and strategy. “But the fact that we’re engaging via video is totally different.”

With “Foreword,” Medium aims to both cater to its current user base and reach a new audience on YouTube and Facebook. The company started a YouTube channel and a dedicated Facebook page for the series, both of which will include full episodes as well as supplemental clips and content. And, of course, “Foreword” also has a page on Medium itself. Medium attracts nearly 1.6 million unique visitors from the U.S. each month, according to analytics firm comScore.

“Right now, [‘Foreword’] is on YouTube and it’s also posted directly on Facebook, because that’s where the people are,” said Lichty. “We’re a long way away from it ever making sense for us to have our own player.”

The move into video is a new frontier for Medium, which has built a platform-publisher model that melds an open tech platform for anyone with original content in publications like Matter.

In terms of viewership, the B.J. Novak episode is off to a slow start, accruing 1,250 views on YouTube (as of Thursday afternoon) since its late Tuesday posting. It’s doing a bit better on Facebook, racking up more than 2,400 hundred views on that platform in half the time. (The primary Medium Facebook page, which has more than 82,000 likes, shared the video post from the “Medium Foreword” page.)

The relatively quiet launch did not surprise Lichty, who remarked that Rome wasn’t built in a day. Nor did it it shock Medium’s new Web video peers.

“Whenever you’re starting fresh and new, you need a good amount of time to build an audience,” said Cenk Uygur, CEO of The Young Turks Network, which operates YouTube’s largest news channel. “Medium is going to find its audience, and that audience is going to be influential. But at the same time, it’s not easy to get a large audience to watch a long-form format like that. … Medium shouldn’t be afraid to experiment.”

That’s precisely what Medium plans to do. In addition to sharing “Foreword” on its site and social properties, Medium will “probably” invest in some “targeted, paid distribution,” said Lichty. Medium also plans to take the unedited version of each conversation, extract the audio and release each episode as a podcast (an increasingly popular media format). Medium’s podcasting ambitions sound like a great idea to eMarketer analyst Paul Verna.

“When I heard about ‘Foreword,’ I immediately envisioned ‘Serial’ and ‘Fresh Air’ listeners as the target audience,” said Verna. “We want to hear what these authors have to say, but we don’t necessarily need to see them. … If people want to listen on their commute as opposed to watch it on their desktops, it doesn’t lose much in that translation.”

Medium didn’t initially conceive of “Foreword” as a vehicle for monetization, but the company has already received several inquiries from brands, according to Lichty. Video and podcast ads tend to fetch far higher ad rates than standard display advertising, so “Foreword” could become a valuable commodity for Medium. That hinges on its ability to generate a substantial audience for the series, however.

“We’ve quickly realized there could be opportunities to partner with brands on ‘Foreword,’” said Lichty. “We’re definitely open to that.”

For now, Medium is focused squarely on producing stimulating conversations with well-known authors. Creating great content is the most essential step, one that helps inform future production, distribution and marketing decisions. And Lichty is convinced Medium has checked that box.

“Being fundamentally Internet people, we have some amount of faith that if you do something great, it can get found,” he said. “The first step for us was can we make a show that we’re really proud of, and we feel like we’ve done that.”