Why The Daily Mail still believes in the homepage 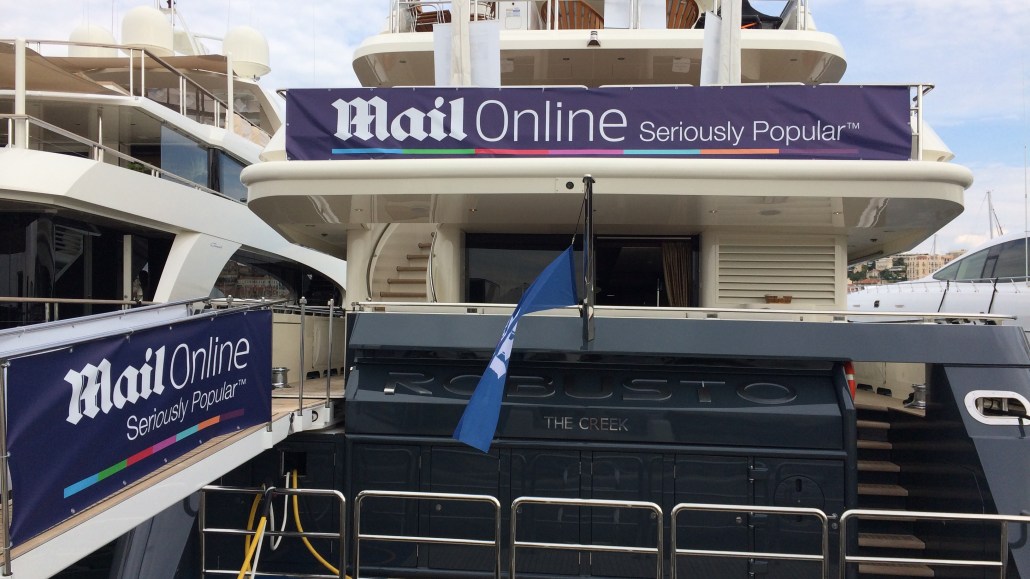 Astute readers of The New York Times’ report on its lagging digital innovation were struck by one telling statistic: “Only a third of our readers ever visit [the homepage]. And those who do visit are spending less time: page views and minutes spent per reader dropped by double-digit percentages last year.” The conclusion by report’s authors: encourage more social sharing.

That approach bewilders Martin Clarke, publisher of MailOnline, the digital offshoot of 118-year-old newspaper Daily Mail. Unlike The Times, Daily Mail has made a digital transition, building an online business that reaches 44 million people in the U.S. with a mix of celebrity and entertainment news alongside punchy summaries of global news events.

“If you don’t have a substantial homepage audience, you don’t really have a brand for the long term,” he said in an interview aboard the yacht in the Cannes harbor that The Mail Online has rented for the week. Clarke was joined by Jon Steinberg, MailOnline’s new North America CEO, who served as president of BuzzFeed during that site’s explosive growth.

Clarke has an old school view of the homepage: It’s absolutely critical to building a lasting news brand with a mass of loyal visitors. The site boasts 5 million homepage visits globally per day. In the U.K., homepage and app visits account for 65 percent of all visits. Globally, that figure is 51 percent.

“The homepage isn’t dead,” Clarke said. “Our us homepage traffic doubled in two years. Our business is all about the homepage. We don’t edit for what’s trending on Twitter. We edit for people coming to the homepage. Every person who visits homepage visits two times a day and each visit spends 12 minutes there.”

Other highlights from the hour-long Digiday chat with Clarke and Steinberg:

Expect a brand change.
MailOnline as a brand was created to differentiate its Internet presence from its newspaper. That was necessary in the U.K., but outside the U.K. has become problematic. Clarke allowed that, for many, the brand sounds like an email service. The company recently acquired the DailyMail.com URL — and it will likely switch its brand over to Daily Mail in the U.S. rather than MailOnline.

Daily Mail produces a lot of content.
Globally the news operation produces 700 pieces of content a day and over 4,500 per week. It has about 150 reporters, so a typical day would mean a reporter is expected to produce five pieces of content. That is the price of entry in digital media, Clarke said, as scale is the name of the game.

“We realized early on you had a choice in digital news,” Clarke said. “You had to put up a paywall like The Wall Street Journal and charge people, or you had to get big. We realized that meant very big.”

Digital publishing will have a few big winners.
In every industry, fragmentation gives rise to a handful — no more than 10 — big winners. In digital publishing, the calling card for winners, according to Steinberg: scale. That’s what attracted him to MailOnline. The challenge now is to solidify the brand.

Sometimes integration isn’t the answer.
News organizations everywhere are obsessed with figuring out how to integrate their print and digital teams. For Daily Mail, this wasn’t an option. Its digital operation is an entirely different beast that its U.K.-focused newspaper.

“One of the reasons we’ve worked is that we’ve never tried to integrate our Web and print teams,” Clarke said. “You cannot repurpose a newspaper as an online news organization. It’s impossible.”

Content still trumps tech in media brands.
For all the talk of platforms, the real differentiator for media brands remains a sensibility. MailOnline’s success, notwithstanding its own homegrown content-management system, is its unique sensibility and way of presenting content, Clarke said.

“We’re not technical dunces,” he said. “We have our own CMS. It’s given us a huge competitive advantage. But at heart we’re a content company. What grew BuzzFeed was fantastic, fun content that people wanted to share.”

Programmatic isn’t the end-all, be-all.
For all the talk of advertising technology and the triumph of machines over men, media will continue to be about creativity, both Steinberg and Clarke said. At BuzzFeed, Steinberg was a frequent critic of the banner ad. He has, understandably, changed his tune at MailOnline which unlike BuzzFeed runs many banner ads. Still, it’s not what leads conversations, Steinberg maintains.

“The big money comes from these 360 degree things,” he said. “The whole essence of advertising is doing something innovative and unique. You can’t automate creativity.”