Like-pocalypse now: The biggest losers in the Facebook purge of 2015 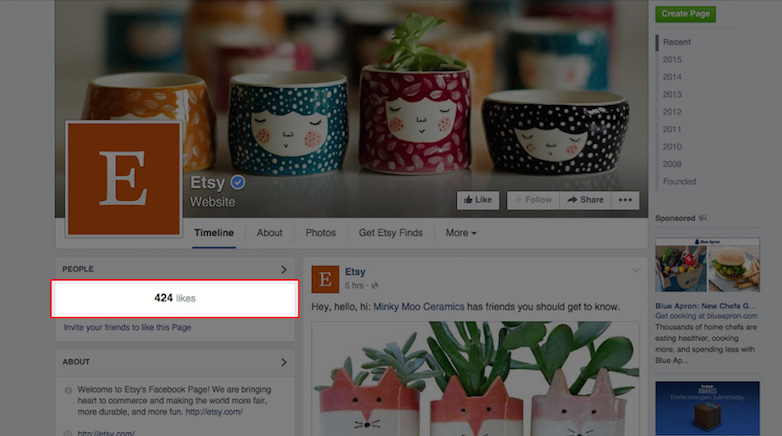 Update: Etsy’s number of Facebook likes has rebounded to its previous level (more than 1.9 million) since this story was first published on Friday, March 13. Facebook said the precipitous drop was due to a “global brand pages migration.”

Facebook is purging likes from inactive accounts, and Etsy’s Facebook page was momentarily decimated amid the cleanse.

Etsy, the platform for buying and selling homemade goods, lost nearly all of its Facebook likes overnight, according to social media analytics company CrowdTangle. The number of likes on Etsy’s page dropped 99.99 percent, per CrowdTangle, from more than 1.9 million on Thursday to a dismal 290 as of Friday afternoon.

Facebook said the precipitous drop was due to a “global brand pages migration,” and by Sunday, Etsy’s number of likes had rebounded to its previous level at more than 1.9 million.

Among other media entities hit hard were ESPN (UK), the sports network’s Brit-focused page, and sleep rock sensation Enya, who lost more than 70,000 likes (or 3.5 percent of her like-base).

Facebook warned about what many are calling the Great Like Purge of 2015 in a blog post last week, saying that it would erase page likes from accounts that had been deactivated or “memorialized,” profiles for deceased users.

“I’ve never actually seen anything like that before. My bet is that something went a little wrong in the cleanup process for this particular page,” said Silverman.

“Etsy has traditionally had a great engagement rate on its Facebook content, which makes it even less likely it was a real purge of inactive accounts. They post a lot of beautiful, creative and unique content that gets a lot of interactions.”

Etsy spokeswoman Nikki Summer said the drop was likely due to it working with Facebook to provide
“localized experiences under one global brand umbrella” and that “correct fan count should be back in a few days.”

Likes have become less valuable over the past two years as organic reach has approached zero. But likes are still important for brands looking to target Facebook ads with “look-alike modeling.” Brands can analyze the demographic makeup of the people who have liked their page and use that information to target Facebook users with similar characteristics.

Below are the 10 brands that lost the most Facebook likes from yesterday to early Friday afternoon.

And here are the 10 media companies that experienced the greatest drop in total Facebook likes.