Spoiler alert: Ad blocking is a serious problem; it’s just a little unclear exactly how big of one.

Take Britain. If you look at the IAB’s figures, which it conducted with YouGov, 22 percent of U.K. adults are blocking ads. Wait a minute, market research company GlobalWebIndex says the figure is 37 percent. According to Pagefair and Adobe’s 2015 report, it was already at 20 percent in the second quarter last year. U.S. ad blocking firm Optimal puts U.K. ad-block rates at 16 percent.

This maddening exercise can be repeated as one tries to get a handle on how big of an issue ad blocking really is for publishers.

Like all statistics, variances arise due to differences in methodologies and sample sizes — not to mention in motivations. GlobalWebIndex’s reports stretch across all 28 countries in Europe. GWI surveyed 22,476 consumers who live in Europe for its survey. IAB reports are also based on consumer surveys — in the case of the U.K.: 2,049 adults. IAB Netherlands outsourced its own report to an agency, though the results were, again, panel based. 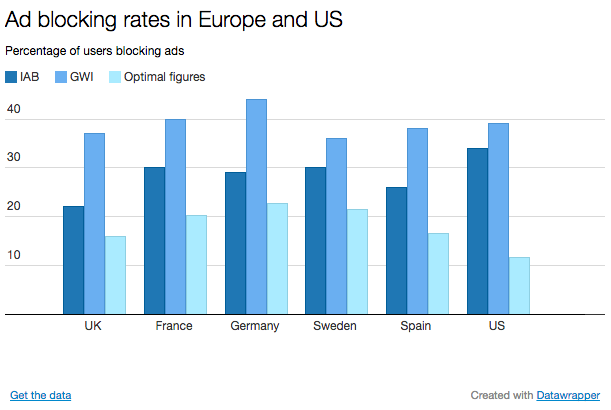 “I’ve seen some surveys with just a few hundred people,” said IAB’s U.K. director of data and industry programs Steve Chester. “Nothing wrong with that, but is it really nationally representative. People who frequently visit gaming and tech sites, for example, tend to block ads more than others.”

There’s an element of a scare factor. Pagefair, for instance, is a popular source of ad-blocking stats. The company also has an incentive in ad blocking being perceived as a major issue. Similarly, Optimal (in conjunction with Wells Fargo Securities) released an ad-blocking report last week.

“As we’ve seen before with viewability, emerging digital topics tend to have some variation in metrics — often as wide as the variation in business models,” said Guardian global revenue director Tim Gentry. “Some of the businesses models connected to ad blocking have a vested interest in it becoming as widespread as possible.”

“We’re in danger of becoming a headline society,” said Chester. “If we take them as absolutes, then we do so at our peril.”

Even individual publishers’ own figures vary wildly, but it’s important to just drill down for the context, he stressed.

“The danger is that there are lots of headline figures out there, but it’s important to bear in mind the context of all the numbers can be skewed by certain demographics, or sectors, or whether it’s claimed or measured behavior and the type of questions that are asked,” Chester said.

There’s also the question of motivations. Many ad-blocking surveys come from companies with a stake in the fight against ad blocking. For example, Pagefair was created to give publishers options to counter the issues around ad blocking and provides ad tech that publishers can use that cater to the “blocked web.” With Optimal.com, users pay a flat fee for an ad-free experience, which will then split that fee with the publishers users visit.

One key question is the extent ad blocking has taken hold in mobile, where many publishers are seeing the majority of their traffic. Ad blocking, to date, has remained mostly confined to desktop use.

Some of the publishers that have run ad blocking bans, like Axel Springer’s Bild and London business newspaper City AM, have cited that mobile inventory hasn’t so far been as badly affected by ad blocking: As little as 2 percent of mobile inventory was ad blocked. At Trinity Mirror, it’s the same percentage.

Pagefair has spotlighted the growing mobile ad blocking rates in emerging markets like China and Asia, stating that 419 million people are blocking ads on mobile globally, and double the amount who are blocking on desktop.

“We haven’t seen figures anywhere near these, and we are beyond research at this stage. Ad blocking is here to stay unless the industry takes care of the problem,” said Daniel Weilar, CEO of Nyheter24-Gruppen in Sweden. “With all respect to all these software companies’ intentions, Swedish publishers are not keen to handle the problem in any other way than to fix the root, and that is the installed ad-block base.”

And beneath the big numbers, there’s the question of whether or not they represent the mortal threat to publishers that ad-blocking vendors claim.

“All users are clearly not the same value, so big user numbers from Pagefair or the like don’t equate to big impression numbers and, therefore, big revenues,” said Trinity Mirror’s head of strategy, Piers North.