When it came time for NBA star Kevin Durant to announce last week he would leave Oklahoma City for the Golden State Warriors, he didn’t hold a press conference or release a statement through his management.

He did it on The Players’ Tribune, a 2-year-old digital publisher where Durant serves as deputy publisher. The post help generate the most sitewide traffic in The Players’ Tribune’s history, with the publisher boasting 5 million views on the site and across social platforms, and more than 150,000 active users on the post within a minute of the story going live.

When the Players’ Tribune entered the sports media world two years ago, it joined an already competitive market, going up against ESPN, Sports Illustrated and Bleacher Report. The difference: It boasted an athlete founder in baseball star Derek Jeter and was premised on the idea that athletes could control their own message and media platform. To date, nearly 900 athlete contributors have written first-person accounts for the site.

Durant’s announcement follows a pattern. Kobe Bryant and David Ortiz both also drove traffic spikes when they announced their respective retirements on the platform. 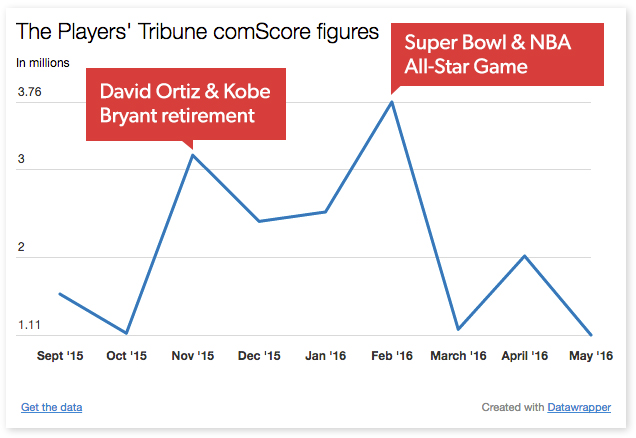 The big question for Player’s Tribune is whether viral hits like Durant can be turned into sustained traffic. After all it’s not something that happens everyday. As Funny or Die saw with its early viral hits like “The Landlord,” one-time, star-driven content is hard to maintain. Building a brand takes time — and consistency — to establish loyalty. And advertisers tend to favor consistent audiences rather than a rollercoaster trajectory.

“The Players’ Tribune has carved out a position as a sort of voice for other athletes,” said Steve Lang, Scout Sports and Entertainment’s account supervisor. “It will be interesting to see how much of that one-time traffic sticks.”

Unlike the normal sports site fare, Players’ Tribune content is more emotive and personal, like New England Patriot’s Martellus Bennett’s poem-like letter, “Dear Black Boy,” following the shootings of Philando Castile And Alton Sterling in Minnesota and Louisiana. Also, former Seattle Seahawks’ Ricardo Lockette contributed “Am I about to die,” where he takes readers through the experience of breaking his neck during a game in November last year, his recovery process, and finally his decision to retire from the sport this year.

“Year one was all about two things: being that trusted athlete platform for the athlete community and developing premium content,” said Raphael Poplock, evp of partnerships and business development. “We’ve nailed those two key elements, and we’re now focused on usage growth and revenue.”

The Players Tribune still has a ways to go when it comes to audience in the competitive sports category. In April, Bleacher Report attracted 28.1 million unique visitors, 79.6 million for ESPN (its entire network of digital entities) and 13.4 million for Sports Illustrated. That said, those properties had big head starts.

Founded by Jeter with investment from Thomas Tull of Legendary Entertainment two years ago, Player’s Tribune has a content team of about 20 people who help produce and edit two to three new written pieces, video, photography, and audio, daily. While it may be the most prominent publisher in the athlete-driven story space, it’s certainly not the only one doing it: publishing platform Medium also has its eye on the sports world, and last year, the NFL Players Association embarked on an effort to take back control over its members’ media value through ACE (Athlete Content & Entertainment) Media.

“There probably is a way to go for the site to establish long term, stable growth as well as consistent audiences,” said Jennie Scheer, director of media at DigitasLBi.

The Players’ Tribune drives revenue through branded content and sponsorships, with about 10 brands currently on board. This week, it announced an advertising deal with Samsung, where contributors Von Miller of the Denver Broncos and Hassan Whiteside of the Miami Heat will create 360 video content at events. It’s also partnered with Budweiser to create an exclusive content studio for social platforms. American Family Insurance, the partner for the publication’s philanthropic arm, TPT Assist, produces content around athletes helping students in communities in need.

Having Durant make his exclusive announcement on the site was bound to boost users and social numbers. The Players’ Tribune picked up 55,000 new Twitter followers and 12,000 more Facebook fans. Using celebrities and their social followings isn’t new, but it’s still effective: GQ’s story on Kim Kardashian, for example, drove its biggest days of online traffic ever, with a million unique views in one day.

“Roughly 80 percent of users coming in for Kevin Durant were new users, and what we’ve seen since is homepage traffic has increased substantially, but it starts first with making sure content isn’t just a one and done,” said Poplock.