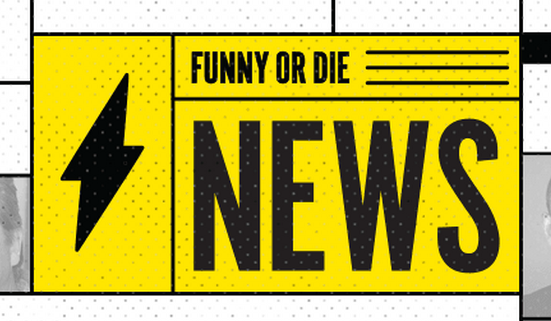 Funny or Die may be one of the sites most unqualified to start a news vertical.

The comedy video site, founded in 2007, is more at home cracking jokes than breaking news. But that’s not going to stop it from trying. Funny or Die News, launched this week, aims to take a comical approach to current events with stories about technology (“14 Things to Know About Driverless Cars“), politics (“Updates to the Secret Service Manual“) and, yes, even Ebola (“Study: Most Americans Prefer Not to Get Ebola“).

Early content from the site’s four writers includes FAQs, explainers and even interactive maps. Video is on the way as well. Funny or Die News’ editorial strategy is fairly straightforward: “When real news happens, we’ll make jokes about it,” said Funny or Die editor-in-chief Dan Abramson. “But the goal theoretically is that people can come to us and stay informed about the world at the same time.”

Call it a modified Jon Stewart. Unlike pure satire sites like The Onion and the BuzzFeed formula of fun and informative, Funny or Die aims to be more like the Web’s “Daily Show,” which combines news coverage with humor. And there’s evidence that the approach can work. Despite Comedy Central’s claim that “The Colbert Report” is a fake news program, research repeatedly shows that the show’s viewers are consistently more informed than people who watch channels like Fox News.

“The audience for these programs are largely young people, who indicate overwhelmingly that they prefer entertaining news over hard news,” said Amy Beckter, assistant media professor at Loyola University Maryland. “It’s basic psychology: laughing at it makes it less of a serious experience.”

MaryLeigh Bliss, trends editor at millennial research firm Ypulse, said that young people today are also drawn to unconventional news sources because they don’t trust the serious ones they’re already reading and watching. Over 60 percent of 14- to 32-year-olds polled by Ypulse say they’re not confident about the accuracy of the news they receive. “‘The Daily Show’ is making fun of the news, but they’re also making fun of those traditional news sources and holding them under a microscope. That treatment speaks to these viewers’ own attitude right now,” she said.

While building a larger audience won’t be easy, equally important is the question of whether Funny or Die News can balance informing people with entertaining them, something that’s not easy to pull off. Even “Colbert Report” landed in hot water after a poorly written tweet from the show’s Twitter account caused a stir on Twitter in April.

Abramson said it will be a while until Funny or Die News figures out the ideal way to handle some of the more sensitive stories. “We’re going to have to figure that out as we go along. At the very least, we can make good jokes,” he said.