The Financial Times tries its hand at more commerce 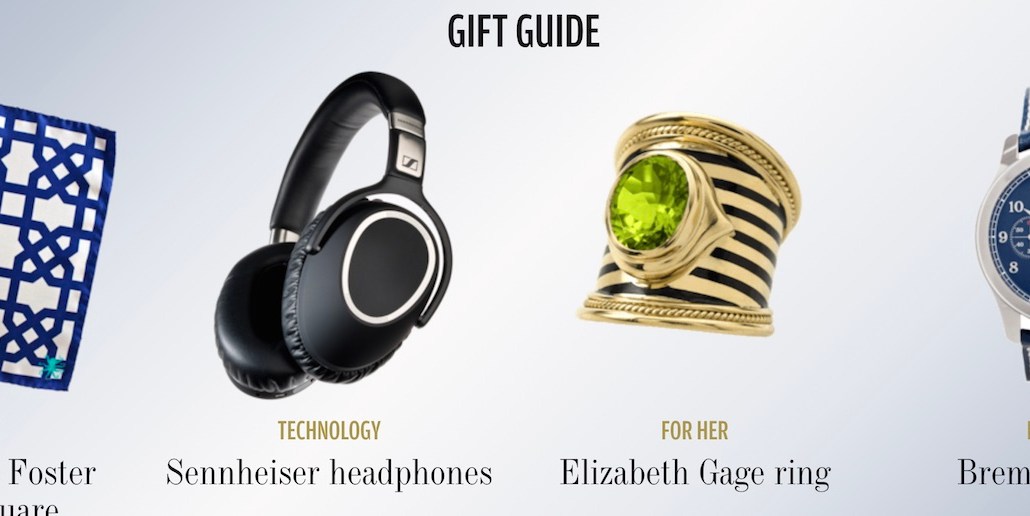 How To Spend It, the Financial Times’ luxury and lifestyle supplement, is relaunching Wednesday with a redesign that focuses on improved speed, aesthetics and — most important — a more robust e-commerce tool.

How To Spend It has been part of the FT’s brand for 40 years, first as a column, then a regular print supplement. It features articles on travel, food and drink, fashion, cars, bikes and boats — all with an unsurprisingly hefty price tag befitting an FT reader. For example, a Bremont watch goes for £4,895 ($6058), and a Mulberry scarf is priced at £195 ($241). The site itself went live in 2009; this is its third redesign.

During research for the redesign, which has taken a year, one survey found that 87 percent of readers have bought products or services they found on How To Spend It. “People use it as a tool to book and buy,” said Chris Nardi, global luxury advertising director at the FT. “The fact it’s useful to the reader came through strongly. This made us reconsider columns that didn’t have actionable next steps.”

Once in the gift guide, which shows a grid of high-end items like an Alessi teapot, Alberta Ferretti earrings or an Alex McCarthy vase, people can click on the the particular gift to expand for a better view and for more information. Previously, clicking on the gift would take readers to another page. “Not loading another page helps lower the time delay and latency,” he added, “which is where you start to lose audience as they bounce out.”

This direct link to commerce is not lost on advertisers. “How To Spend It does sell products. It’s effective; this isn’t something that is vague,” said Tammy Smulders, managing director at Havas LuxHub. “It’s a core part of media plan for most clients.”

In September, the site had 190,000 monthly uniques, according to Google Analytics (the FT doesn’t break out How To Spend It for comScore); this can peak to around 300,000 in the lead up to Christmas. It’s not large by any means. According to Nardi, 70 percent of How To Spend It’s readers are referred from the FT. The remaining 30 percent are from organic searches.

“Good advertising is in context against an audience,” said Dan Chapman, head of digital at MediaCom. “There’s not a lot of luxury third-party data out there. It’s difficult to target C-level execs. For Etihad Airways, we used to target their personal assistants instead, but getting them during their down-time too is a real sweet spot that’s hard to target.”

Like other sites looking to upgrade, speed is usually a driver. “For us, it’s important, but we need to balance it with the aesthetics and objective of discoverability,” said Nardi. Big images are beautiful, but they are also heavy. The site doesn’t have reliable figures on the page-load times yet, but the old site was averaging page-load times between two and three seconds.

When it comes to ads, on desktop, it supports two standard IAB display ad formats, having dropped one from the old site. The second ad isn’t pre-loaded and only makes the call to the ad server when it is in view, thereby boosting viewability as well as shaving off page-load time by not being pre-loaded.

This year, branded content makes up 30 percent of How To Spend It’s revenue mix, according to Nardi. It works with brands to create articles, like this one by champagne brand Louis Roederer, on how to create a new wine with French designer Philippe Starck. So as not to dilute the editorial, it doesn’t work with more than one or two brands in any category, and there would never be more that four or five branded content campaigns running at any one time.

The rest of revenue is made up by display ads, and primarily direct buys rather than programmatic. “The tech is still catching up, most luxury clients want 100 percent share of voice on the page,” said Nardi.

Now, How To Spend It is looking to find new readers where it can, in part through more prominent signing on the FT.com but also by being more active on social media and through email newsletters.

According to Chapman, the challenge in attracting new audiences now, in an age when younger generations aren’t spending as much on luxury brands, is in showing the publication features content beyond what its title suggests. “In the past, wealth meant money,” said Chapman. “It was for someone who had acquired wealth and what that physical aspirational item was. Now, wealth spans to the experience too.”

Image: Courtesy of How To Spend It.