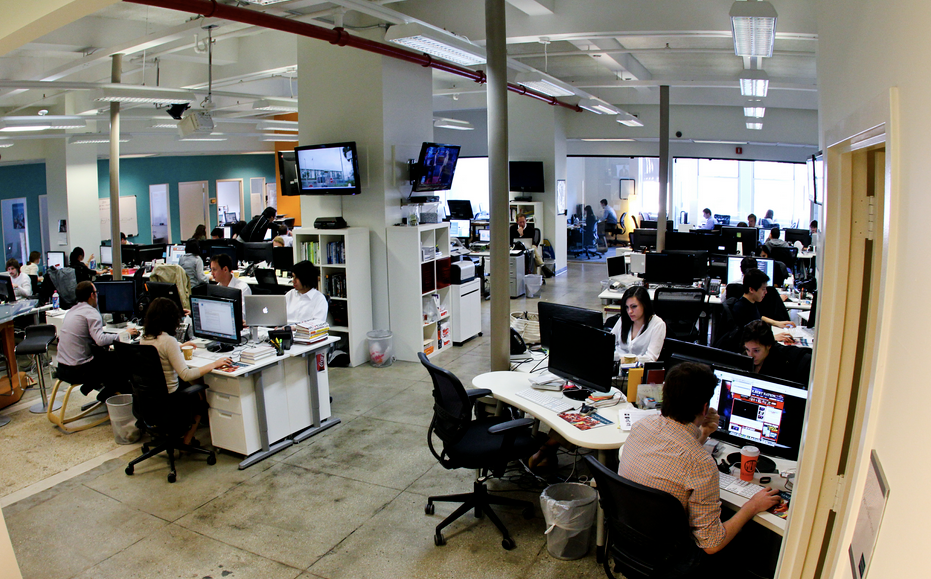 At some point, you’ve clicked on a provocative headline because, well, you’re human. Sometimes the temptation to see the 15 sexiest programmers alive is too strong to deny. You know that it’s a slideshow, and you know that you’ll be upset at yourself when you’re done clicking. But yet you do — and you’re not alone.

Business Insider, Henry Blodget’s all-things-to-all-people content site, plays in two media worlds: aggregation journalism and straight-up reporting. Blodget has taken on a heap of criticism for his aggressive aggregation, but he has also received praise for distilling heavy topics into digestible formats. Business Insider is trying to push journalism into a different era.

“We’re trying to do something that’s conversational, and the idea that journalism consists of prepackaged delivery of content is dead,” said Business Insider president Julie Hansen. “It doesn’t apply anymore. It’s not what people want. It’s not how we live. It’s just irrelevant.”

Blodget believes journalism needs to adapt to the medium and to be where people live. The theory: The modern publisher is equal parts reporting, aggregation and fostering conversation, which should make the reporting and aggregation that much better. He argues that print and broadcast have their place, but the Web is where people live and content needs to be digestible, informative and fun.

“Our readers have five minutes,” Blodget said. “They want to get the full impression. Rather than get 3,000 words, you can now see all these beautiful pictures and understand what’s going on in five minutes. It turns out that that’s a perfect application for this medium.”

On aggregation, Blodget noted, “The other thing that’s important, on the aggregation side, is we now are in a world where millions of sources of information are a click away. Lots of traditional publications still have the view that that information should not be used, even though everyone knows it and is being talked about on Twitter. Our view is, of course we’re going to take advantage of that. It’s a link away. People are talking about it already; let’s add value to it.”

Inside the Business Insider newsroom, about 50 editors and journalists create and curate content for its, according to Comscore, 5.8 million unique visitors per month. The publication has the tendency to think out loud as it reports. Most recently, Blodget wondered why people hate Jews — not the typical article for a business publication. But this is a publication that believes its audience is interested in topics beyond the business community and that “collectively, our readers know much more than we do,” said Blodget.

“Business Insider made a conscious decision to be the Huffington Post,” said Kevin Wassong, president of Minyanville, an online financial publication. “If you’re going to run these stories, all you’re doing is being provocative to drive pages. It works. If you’re playing the advertising game to make money on a website, you have to have scale.”

According to Digitas evp, global media director Carl Fremont, Business Insider still has a way to go before reaching the levels of other business outlets.

“If it’s being in a news environment, where positioning within heavy news of the moment, in a highly credible source, then the Wall Street Journal, Forbes or Fortune are a better match,” Fremont said. “If you need to reach a large audience looking to get up-to-date information on various subject and what others are saying, Business Insider is part of that strategy. Business Insider doesn’t have the same news cache that a Wall Street Journal or Forbes or Fortune or Business Week would have.”

But Business Insider doesn’t have to necessarily compete against the business media. Its audience comes to the site for quick information about what’s happening in not just the business world, but also in sports, entertainment and general news, often in a provoking and irreverent narrative style. The site prides itself on targeting the new generation of business leader, one that isn’t afraid to show different sides of himself. While this could seem like a double-edged sword for advertisers, Business Insider’s chief revenue officer, Pete Spande, believes that there’s a connection being made between its readers and both the content and advertising.

“If you look at the audience and the coverage we’re delivering, and look how we’re engaging the audience, I would argue that there is a place for this,” Spande said. “Audiences go to the thing that serves them the best and that they like the best. The growth we’ve experienced would argue that that business leader and consumer are voting with their clicks.”

“For many brands that want to associate with that type of mindset, around people who are curious about thought-provoking content and editorial, then it’s a good match,” said Fremont. “But I wouldn’t compare it to more established business journals.”

Business Insider works with advertisers in engaging ways. The outlet has several products focused on creating strong brand affinities, such as taking over a unit like they did with Woodford Reserve, a liquor company that sponsored Business Insider’s Twitter page, or with strong content sponsorships. Beyond ads, the company drives revenue through its events program, which, according to Hansen, is growing. The company also has a subscription business, Business Insider Intelligence, currently priced at $199 and on the rise, which provides analysis for executives to make business decisions. Business Insider has 11 staff on its sales team and is looking to hire four more. And while it has a partnership with a number of different yield optimization companies, Spande said it primarily works with just one for unsold inventory.

Even so, Fremont said Business Insider doesn’t have a strong value proposition to the B2B market. Fremont believes the outlet isn’t an important buy.

“There’s nothing unique for advertisers,” Fremont said. “Its audience, while large and respectable, isn’t in the stratosphere of a must-buy from a reach point. I think ‘Business Insider’ is a misleading name; it’s not an insider view. I think there could be a market for the type of content and editorial they have.”

There’s no doubt the outlet walks a fine line with its content approach. The outlet is keenly aware that business people are multifaceted and interested in things both related and unrelated to the business world.