How The Infatuation is plotting Zagat’s comeback 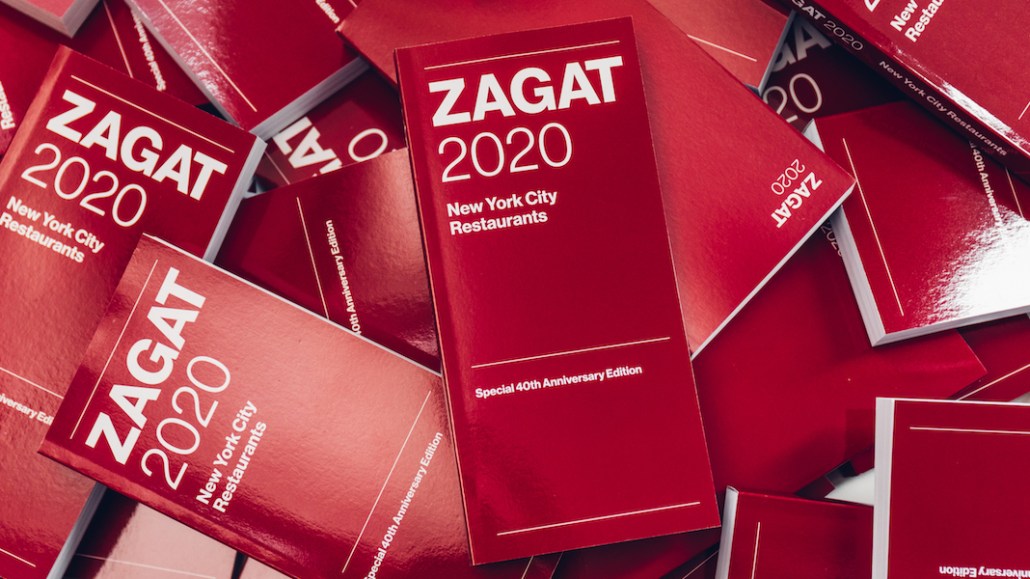 At one time, Zagat was synonymous with New York dining. But that was at a time when a dog-eared maroon book was the “go-to source” for “where to eat” and “what to do” — and an early example of the wisdom of the crowds. Zagat was purchased by Google in 2011 and continued to fade from relevance. Reviews publisher The Infatuation, which purchased Zagat from Google for an undisclosed sum in March 2018, is preparing Zagat’s next act.

First is a 40th-anniversary edition of the Zagat New York City guide, debuting next week and, by 2020, a new digital platform including an updated website and app. It’s been three years since a printed Zagat guide has been published, and the slim burgundy books saw the height of their popularity in the 1980s and 1990s.

Relaunching Zagat has been a careful exercise in balancing the brand’s storied reputation while leveraging the millennial-friendly following The Infatuation has built.

“Zagat was really the first example of user-generated content back in 1979 when [Tim and Nina Zagat] were giving friends paper surveys and having them fill out info about their favorite restaurants,” The Infatuation CEO Chris Stang said. “What does UGC look like when you take a 40-year-old iconic brand and 10 years of domain expertise we’ve built understanding this space, and what’s happened in user-generated content and build something new?”

Stang wouldn’t divulge exact details about the new Zagat product features to be released next year but did say the team will use technology and human vetting to ensure content quality. “[I want people] to feel excited about leaving their knowledge and expertise for other people,” Stang explained.

The New York-based company has kept both the Zagat and Infatuation brands separate, with a handful of full-time employees who work on Zagat. It operates in 12 cities, including London.

Stang said he sees both brands continuing to coexist and that both audiences have become wide-ranging in terms of geographic reach and demographics, and are roughly the same size.

A brand partnership deck for The Infatuation notes that its website receives 4 million monthly views and that its total social following includes 4.1 million followers. Its audience is primarily female (65%) and 72% are aged 21 to 34. The audience for Zagat is presumably older.

He also said you can expect to see reviews from both sites integrated onto the other, so users can cross-reference the opinions of The Infatuation’s reviewers with those of the crowd-sourced Zagat scores, for example.

Zagat’s reviews will also have a different voice. Whereas The Infatuation emphasizes contextual dining reviews, such as “Where to Go When You Don’t Want to Make a Big Deal About Your Anniversary,” and it features the voices of a single reviewer, Zagat’s reviews are still being crowdsourced and repackaged into snappy snippets.

This time, however, Zagat isn’t asking people to fill out surveys by hand. Instead, there’s an online survey link, and The Infatuation has created a Zagat Curators program to enlist passionate and knowledgeable diners to contribute their reviews and recommendations. In New York City, the curator group comprises 88, and is something Stang hopes to replicate in other cities over time, including internationally.

“We want to own the market,” Stang said. “We want to be the biggest restaurant recommendation company in the world.”

The Infatuation is also hiring a “stories editor” for Zagat who will contribute more “narrative-driven and editorial content” that “puts the Zagat name back out into the world.” Said Stang, “Hopefully it will reach Zagat friends and fans from past but also introduce new people who don’t yet have a relationship to the brand via great content.”

Since launching The Infatuation in 2009, Stang and his co-founder, Andrew Steinthal, have raised $33.5 million in funding, most recently with $30 million from Jeffrey Katzenberg’s WndrCo. Stang wouldn’t disclose its revenue numbers but said the company has been “in a growth phase this year and has seen very positive revenue growth as a result.”

Most of the company’s revenue comes from brand deals with companies that range from Nike and American Express to Postmates and Don Julio, a tequila maker.

Zagat is focused on developing more brand partnerships as well as seeing revenue from book sales, some of which is being driven by corporate orders. Stang said that shortly after announcing the New York City guide would be back out in print, he received inquiries about making custom orders where companies could customize the guide with their logo and gift them to clients or employees. “That was a huge revenue driver of the books in the past,” Stang said. For now, only the New York City anniversary guide is being published, but based on its reception, the company may decide to publish more guides in the future.

Stang said the team is also looking to generate revenue from the Zagat brand via events. Last year, the company hosted 65 events, including the popular EEEEEATSCON in New York and Los Angeles.

Stang said he won’t put up a paywall for Zagat’s content anytime soon, either, although the company just recently introduced a membership package for New York that gives members special access to events, expanded travel guides, discounts and The Infatuation’s popular text-based restaurant recommendation service, Text Rex, which used to be a free service but is now only free for members.

https://digiday.com/?p=351706
Most Read
Trending in Publishing in the Platform Era
Digiday Top Stories