Hearst Magazines has been adapting its traditional magazines to match the speed of the Web, and now it’s starting to apply what it’s learned to new launches.

Hearst is about to unwrap the first of a few new digital-only products, a shopping site called BestProducts.com. The site is expected to launch later in the week of Oct. 26. It’s being run by executive director Patrick Varone and will have a team of 15 when fully staffed.

“We’ve had a couple of years of getting our house in order, changing our editorial approach, and I feel like that’s served us incredibly well,” said Troy Young, the company’s president of digital media. “We have a strong new platform. Now we can start applying that to new opportunities.”

It’s the first new site to spring from Hearst’s new centralized publishing system, which Hearst has been putting in place across its 21 U.S. magazines including Cosmopolitan, Elle and Esquire and their international counterparts. A big feature of the content-management system is that it gives Hearst editors the ability to see what stories are trending well and sibling sites and share editorial content with each other, so they can scale their audience faster. But Hearst also wanted to use the CMS for experimentation, and BestProducts.com is the first visible manifestation of that.

“We’re now at place where we can spin up properties incredibly quickly,” Young said. “This went from idea to launch in six weeks.”

The site is also a departure for Hearst in the way it’s approaching commerce. The idea of BestProducts.com is not to attempt to compete with Amazon but to serve shoppers who need help making up their mind on what to buy but don’t want to do the work of sifting through the Web’s ocean of information.

The site’s editors will evaluate and recommend products in nine verticals including food and drink, gadgets, beauty, fashion and home, based on what’s trending around the Web and what consumers are already saying about them online. (Some headlines readers will see once the site is live: 10 Best Smart Watches You Can Buy Right Now, 10 Best Star Wars Toys Your Kids Need Now.) The site will be based on the affiliate model, where visitors click external links to buy the products, with the publisher taking a (usually) small share of the revenue. 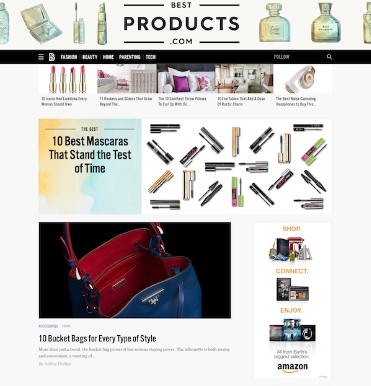 It’s a tricky time for reader comments on publisher sites, because they can turn off advertisers if they turn negative. But since BestProducts.com won’t depend on display advertising for survival, it can have reader comments without worrying about their business impact.

Other publishers have tried to layer commerce onto their existing brands, as Time Inc.’s People did last week. BestProducts.com is independent of existing Hearst titles like Elle and Good Housekeeping, so it won’t be limited by a certain editorial point of view. It reflects Young’s belief that for a digital publisher to survive in a cluttered landscape, it needs to have a clear point of view. Ultimately, though, the hope is that Hearst will learn things about commerce that can be applied to its other titles.

“It’s certainly an audience-first play as opposed to an editor-first play,” Young said. “When you are singular in your mission, you get a better product.”

It’s smart for traditional publishers to launch new products because their legacy brands are threatened, said Paul Berry, CEO of RebelMouse, although he cautioned that publishers can err in spending too much on technology, which can slow them down and be too costly.

“It’s easier to start a new brand than change perceptions about an existing property,” he said.