Hearst CTO on the publisher’s plans for the future 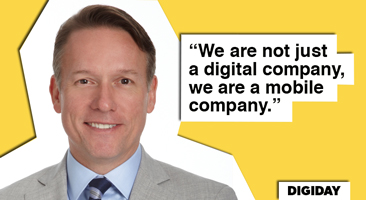 Hearst Corp. announced that it has formed a new digital product development group to create mobile apps for the company’s magazines, newspapers and television stations. As the company’s audience has become increasingly digital and mobile, with on average 50 percent of the audience visiting on mobile devices, the pressure is on it to make sure the products and the revenue keep up. Overseeing the group is Phil Wiser, Hearst’s chief technology officer since 2012, who said the company has made progress on mobile, but it has much more to do.

What’s this team going to do for Hearst?
It’s part of a broader strategy to build more technical skills into the company. It was a recognition that being a media company in the future means being a media company and a technology company. Some of it’s through recruitment, partnership and acquisition. We have a sense of urgency. Our audience is very much a digital audience today and has migrated to mobile very quickly. We are 50 percent mobile on average every week. We are not just a digital company; we are a mobile company.

How would you rate Hearst’s products now?
I would give us a good mark to date. We’ve updated our products so they’re mobile-friendly. We just did a redesign of our newspaper products that drove a significant increase in engagement. But we have many more to do. So we need more scale.

Hearst just launched CosmoBody, an online subscription video service, at a relatively high cost of $9.95 a month. Is that the model you’ll be looking to replicate?
That’s one element of the strategy. We’ll be looking at free businesses, but we want to develop products people are willing to pay for. We know we have to go deeper in our thinking of our service to consumers if we want them to pay for it.

You formed this group with the acquisition of the professional networking startup BranchOut. Its own app didn’t really work out, though, and the company pivoted. What did Hearst see in them?
There were several elements. They had a messaging company that we thought was well received. They also had expertise in utilizing the social graph. That combination of mobile and social attracted us. They’re a very strong technical team. [Their app] was an explosive hit. Facebook changed the rules so they couldn’t operate as they were, and that limited their growth.

Lots of apps get downloaded, only to be quickly forgotten. How are you approaching these?
Our view is that an app needs to be an experience that’s a daily habit. If you’re not accomplishing that, you don’t necessarily need to have an app. In some of our properties, the majority of engagement is still on mobile Web. In news, the consumers in those markets interact with us everyday. The application drives the deepest level of engagement. This is a different relationship than a headline or “have you seen the latest person do someone silly on Facebook.” It’s not that we haven’t been guilty of doing apps that people downloaded once. But we have a clearer view of where a native application fits into our digital ecosystem.

How will you make money from all this?
We’re experimenting with many different approaches. Subscription is always going to be part of our strategy. We’ll also experiment with a la carte offerings, as we just did with The Falling Man and Esquire, with really strong results.