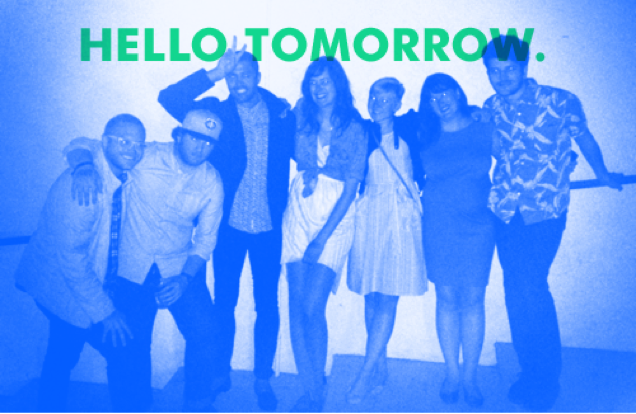 Like many magazines, Good Magazine hit tough times. That meant recently laying off six staffers. True to its feel-good ethos, the newly unemployed staffers chose not to rail against the inhumanity of it all and instead set out to try a new way for funding journalism: turn to the Web for help.

The six, joined by two other Good staffers who quit, decided to create their dream publication — a one-off magazine titled Tomorrow to highlight what’s coming around the bend “about the people, the movements, and the trends that are tearing the world down and building it anew” — and looked to the social Web to make it happen. Tomorrow, if it happens, will be the result of a Kickstarter campaign that’s promoted via Tumblr and Twitter.

The plan is ambitious. Tomorrow needed to raise $15,000 to come to life as a 100-page glossy. Kickstarter has proven a powerful collaborative funding vehicle for others. Why not for journalism?

“We know most were not going to give in the hundreds, but in the tens (of dollars),” said Megan Greenwell, the former managing editor at Good and one of the journalists spearheading Tomorrow. “We wanted to get the base level of the magazine to the widest range of people and at a level, if decent, people gave that, we could produce the magazine.”

So far, 635 backers have pledged $24,000, meaning the project is off the ground — and there’s still about a month left in the funding period. Maybe the single issue will become many more; Tomorrow is leaving the door open on that one.

Tomorrow is not the first to rely on crowdsourced funding for a publication (there’s Howler, a soccer magazine; Wax Magazine, a magazine about the intersection of culture and surfing in New York City; and Makeshift, a quarterly magazine looking for creativity in unlikely places). It is, however, the most visible due to the journalists involved — and how it came to be. However, Greenwell notes that what works for one outlet’s campaign might not work for another.

While this may be a novel approach to creating an outlet, it’s difficult to imagine that this is a sustainable business model for publishers — print or digital. However, there is something appealing to cutting out the middleman between content producers and their audience. Sure, we’ve seen other content creators have success in this, most notably comedian Louis CK, who has been able to cut out the middleman entirely. It’s still difficult to create a publication without the necessary evil of advertising or a wealthy backer.

If Tomorrow moves forward, after the one issue, there are still some unanswered questions. All the journalists are actively looking for jobs, and they understand things will change once they land new gigs. But Greenwell said they are fully committed to making the magazine on nights and weekends.

“It’s just us and those supporting this,” Greenwell said. “It made me feel really refreshed by journalism. It’s nice to see people wanting to support a great project and willing to follow us with a fairly general description of what our new project will be.”