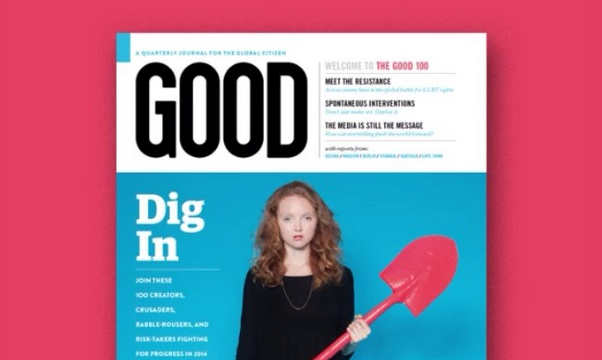 In 2012, cause-driven magazine Good magazine made a fateful decision, laying off six of its nine editorial staffers in favor of pushing a “community-based publishing system.” The platform, which was essentially reddit for social good, was meant to extend Good’s editorial mission to a larger, more diverse group of grassroots activists. At the time, it appeared a small but important moment in the march away from professional-driven content in favor of the wisdom (and creativity) of the crowds.

And now, the worm turns. Content is back in vogue, with venture capitalists pouring money into new content ventures like Business Insider, Mashable and BuzzFeed, and new journalistic ventures springing up under big-name editors. Content is also, it appears, making a comeback at Good, as it is planning to rebuild its editorial team and recommit to the sort of original reporting it became known for from its founding in 2006 to its course shift in 2012.

Good co-founder Casey Caplowe said the plan is to hire an as-yet undermined number of reporters and designers to create both magazine and Web-first content. Topics will range from “what jobs mean today to the identity of modern American veterans,” Caplowe said.

“We’ve recognized that we did lose some of the footing for our media efforts in the last couple years, and are seeing a tremendous opportunity to bring that back and fine tune it to the way we’re all consuming media these days,” Caplowe said.

That’s the key often lost in the obsessive race to big ComScore numbers on the cheap. Quality content still has value, even beyond the raw numbers of pageviews it generates. Community-minded tech tools are part of the modern media equation, yet they’re unlikely to be the entire answer in most cases.

“The idea of authoring and publishing beautiful pieces of written content isn’t the game of community, but it is the game of [editorial],” Caplowe said.

That shift should help turn around Good’s traffic numbers, which dipped to 517,000 last month from roughly 695,000 a year ago.

While Good still puts out its quarterly print magazine, journalism has taken the backseat in recent years. Journalism can’t create change on its own, Good argues, so it doesn’t make sense to put journalism at the center of its brand. Good’s thesis is that fostering social, well, good means creating the tools for people to organize — which is why they pivoted in favor of the platform approach.

Good’s platform move made it an early example of a trend that has recently picked up steam. The likes of Forbes, Time Out and Entertainment Weekly are all doubling as platforms, which they hope will give them the kind of scale — and ad impressions — enjoyed by bona fide platforms like Facebook and Tumblr.

Money is invariably a factor when publishers go the platform route. After all, one of the biggest benefits of the platform approach is that you don’t have to pay contributors. Good, for its part, maintained that its 2012 layoffs were made for strategic, not financial reasons. “Layoffs are a really tough call to make. And frankly, it’s easier to make them when financial pressure is the catalyst. But that wasn’t the case here,” Good co-founder Ben Goldhirsh wrote in a memo to the Good staff after the layoffs.

Like any modern publisher, Good is supplementing its platform and newfound penchant for content with an in-house agency. Good/Corps, its in-house consulting arm, helps brands align themselves with Good’s brand and audience. For a project with Starbucks, for example, Good created the  Starbucks Community Card, an online platform that helped My Starbucks Rewards members decide which nonprofits Starbucks should donate money to.

Now, Caplowe said, is “the right time to revive what had long been the central pillar of Good, as we continue to move things forward.”