Facebook unleashes ‘thousands’ of Instant Articles to all iPhone users

The expansion comes four months after it launched with just a few publishers, like The New York Times and The Atlantic, and seen by even fewer users. Now, everyone who uses Facebook’s app on the iPhone, which is the Apple’s most downloaded app of all time, will experience the fast-loading, image-heavy article pages that are housed within Facebook.

“Instant Articles not only connect readers to stories faster; they also provide a richer reading experience than standard mobile web articles, with dynamic features that make the content more fluid, interactive and immersive,” Facebook said in an announcement.

Compared to when the news articles were in beta, Facebook is adding a lightning bolt to top right of articles on the News Feed indicating that it’s an Instant Article, as seen below: 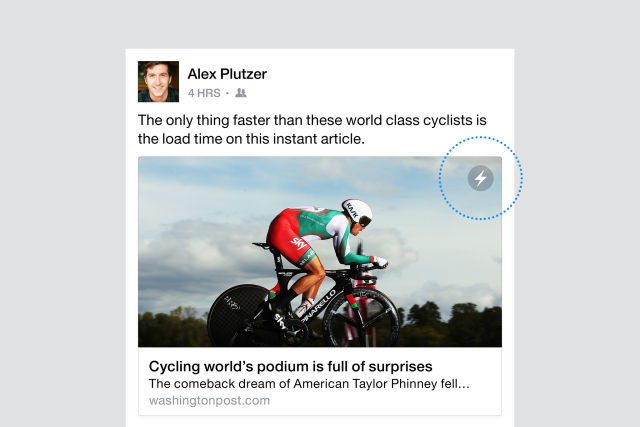 Facebook is ramping up the number of Instant Articles it hosts, too, saying “thousands” of new of the mobile-friendly pieces of content will be uploaded every day.

It’s also increasing up the number of publishers like USA Today, Daily Dot, IJ, The Dodo, Daily Mail, Complex and dozens of others. Cosmopolitan, which Hearst told Digiday in May will be the first of its brands on Instant Articles, is also being added.

Publishers are eager to join the program, despite concerns over ceding control to the social network. Facebook alleviated some of those concerns when it told the companies it could keep all of the advertising revenue sold within the Instant Articles.

Facebook users on Android will have access to Instant Articles “later this year,” much to the chagrin of Window Phone users.