Facebook started off in advertising promising to remake the industry for a social world. Then it met reality and has, since the launch of its ad exchange in September 2012, basically peddled really efficient direct-response ads.

And there’s no arguing that hasn’t worked. Thanks to retargeting ads, app downloads and the like, Facebook has built an ad business that generated $2.3 billion in revenue in the first quarter alone. But there’s the matter of brand advertising, the bastion of big-spending TV advertisers. Direct response may constitute the lion’s share (59.1 percent) of the digital ad market, according to eMarketer, but there’s still $20.5 billion being spent on branding campaigns this year. And right now, while Facebook remains a must-buy for direct-response campaigns, media buyers are less sold on Facebook as a home for more creative brand-awareness campaigns.

“They’re finally clarifying their message into two parts,” Ben Winkler, chief digital officer at OMD, said. “Before they had one message, which was drive fans and likes. It was a clear message, but the value wasn’t because fans don’t mean much for branding or direct response. Now they have two messages: For the preferred marketing developers, it’s about direct response, and it’s a strong one. The other message is still in development, but it’s promising, and that’s the brand message via the video product.”

Facebook is preparing to roll out its long-awaited 15-second autoplay video ads, and their introduction gives Facebook a chance to contend with YouTube in the growing digital video advertising industry. The implementation will reportedly involve seven to 15 advertisers paying $1 million per day for the video ads. Facebook has positioned its video ads as a white-glove product, making known they will not accept just any brand into its billion users’ feeds. On the metrics side, Facebook said last week that it would soon allow brands to see the average viewing time for one of their videos and how many Facebook users watched the video to 95 percent completion.

There’s no surprise that Facebook is making this push. Overall spending in the U.S. digital video category is expected to double to $12.27 in 2018 from $5.89 in 2014, according to eMarketer, and its share of digital ad spend is expected to go from 11.7 percent to 15.5 percent over that same period of time. And if digital video could ever eat away at the growing behemoth that is the traditional TV ad market, that growth could be even greater. 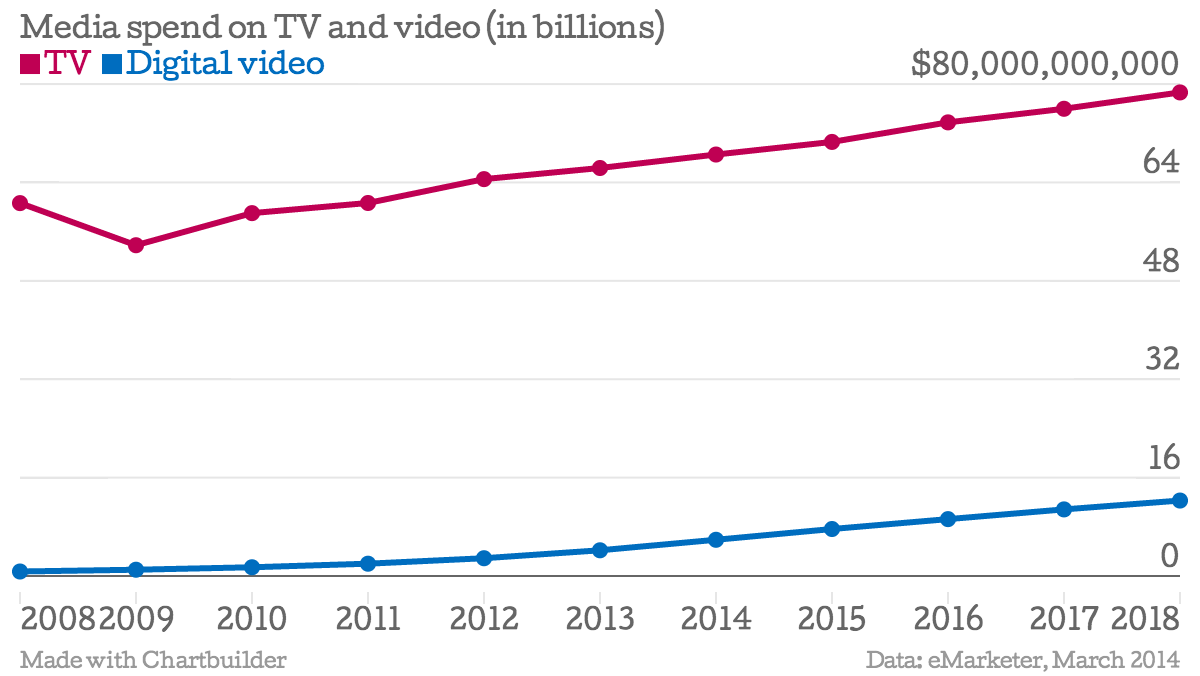 Still, Facebook’s ability to take advantage of that increase is predicated on it shaking its image as a predominantly direct-response channel.

“I don’t think anyone in Silicon Valley understands the difference between a media platform — even one that highly targetable — and the process that goes into creating something people want to see,”  said Steve Wax, partner at brand-design shop Cooke&Co.

For now, Facebook is banking on video ads. It has largely abandoned its early positioning of its platform as a nirvana for brands to engage in social advertising. Facebook once peddled likes to brand pages, on the premise that brands could then develop one-to-one “relationships” with consumers. Recently, Facebook has begun paring down the reach of brands to these very same customers — at least for free. Still, if Facebook’s message is to buy ads, it has the advantage that, by most accounts, its ads work.

Scott Symonds, managing director at AKQA, said Facebook trailed only Google in terms of effectiveness for performance marketers, making it a “must have” for any direct-response campaign. But Facebook has further to go in order to prove it is as valuable for brand campaigns, he said.

Symonds said one of his chief concerns about Facebook from a brand-awareness perspective is that ads placed to the right of users’ news feeds are simply too small and uncompelling to make a serious impact. Exacerbating that problem is that judging the effectiveness of a brand campaign takes a matter of months whereas a direct-response campaign can be judged in real time.

That said, he sees value in Facebook’s boosted posts — ads placed within users’ news feeds. He says that they are more effective and that Facebook can become the brand-awareness vehicle it would love itself to be.