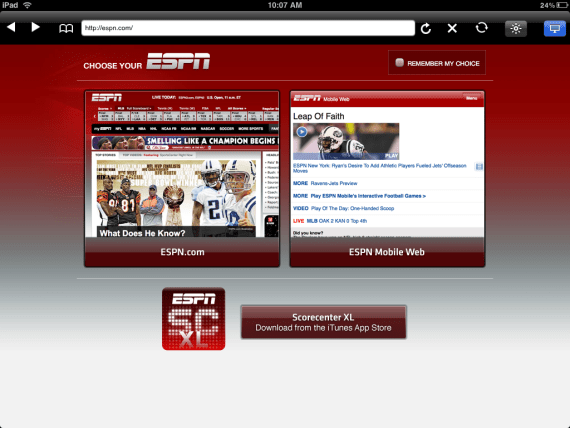 Like many media entities, ESPN is seeing an influx of mobile traffic. But unlike many others, it’s not sacrificing ad revenue for those users, thanks to its strong position with that most old-school of media: TV.

To date most mobile-focused publishers have had a hard time attracting serious ad budgets from brands, but ESPN has a luxury that most others don’t: a large base of established TV advertisers. Now it’s hoping to tap that pool of existing relationships to help increase its mobile sponsorship and ad opportunities and marketer adoption of the mobile channel in general. But it’s not interested in mobile as a freebie for big TV buyers.

According to Bayle the company sells the concept of “companion stories,” and the power of mirroring brand messaging across channels. A 30-second TV spot can easily be ported across to its mobile properties too, for example, without cannibalizing existing TV ad spend, he suggested.

“It’s about making them understand why mobile is complementary. We think the cross-platform approach is a lubricant for clients to understand mobile. What often trips up planners and creatives is understanding how they can be successful in the mobile environment.”

As a result, the major challenge around selling mobile is still educating clients, Bayle suggested, while keeping pace itself. The speed of evolution in the market means even the most versed advertisers need to be updated on a regular basis, he said. “We find during a lot of the conversations we have, we’re not really selling; we’re educating, evangelizing, and encouraging.”

ESPN’s mobile portfolio includes numerous iPhone and iPad apps, such as its fantasy sports games, a range of college sports properties, mobile and tablet websites, and its popular ScoreCenter application. Cable subscribers can even watch live content via their mobile devices through its ESPN Watch app.

Though most of its mobile sponsorships are still sold on a package basis alongside Web and TV media, the company’s had particular success in mobile with particular verticals. Movie studios, for example, frequently find value in integrations on a Thursday or Friday to promote that week’s new releases ahead of the weekend. Other big mobile spenders include CPG and QSR, financial and auto advertisers to date.

“I think you’ll see an explosion of advertising through commerce models, just because the mobile device is, by its nature, that much closer to the wallet. It’s a transactional engine. A lot of our customers are excited by the prospect of using mobile not just to build their brand, but to help close the loop as well.”

The company already has a partnership with StubHub, for example, and drives traffic to the ticket marketplace from within its apps in return for a commission. That content and commerce approach appears to follow an emerging trend around tablets and smartphones, as digital publishers experiment with new revenue streams beyond just advertising, and take advantage of the new behaviors users of those devices display. Research has repeatedly suggested that tablet and smartphone users show a high propensity to purchase from their devices, for example.

Bayle appears well aware of incremental revenue opportunities that type of arrangement could present. “We’ll do it with other partners in 2012,” he said.