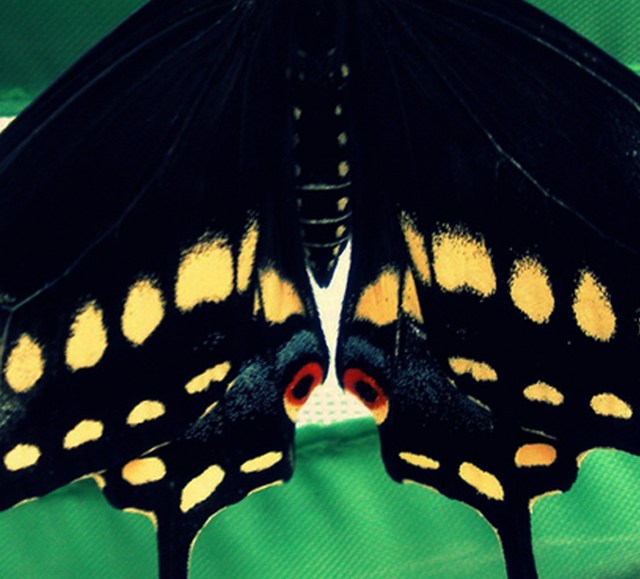 As digital advertising undergoes a metamorphosis, agencies, brands and publishers are grappling with the form advertising takes. It used to be pretty simple to say what an ad is. Now, ads are coming in just about every shape imaginable.

Take “native advertising” in the form of sponsored content. Despite the hue and cry, sponsored content is here to stay as publishers try to differentiate their ads from the dreaded commoditized banners. But achieving a compelling piece of sponsored content on an online publication without watering the quality down is difficult, warns Jay Acunzo, director of content at Dailybreak.

That’s where I find brands struggling most. Everyone knows that good content = better consumer response, but then they layer on ideas like ROI and efficiencies in their content production operations, and suddenly content farms are tapped or banner ads are leaned on yet again.

In short, it always comes back to a really simple idea: make stuff people want, don’t try to make people want stuff. But the publisher mentality in practice doesn’t seem to hit home yet with most advertisers beyond the theory of it all.

Am I too cynical?

Brands are eager to explore new avenues for ads. QR codes, and whether they’re worth it, are a contentious issue. Some see great potential; others see Second Life. McDonald’s is plowing ahead, putting a QR code on every bit of its fast-food packaging as a way to display nutrition information. Smart idea, says Sam Le Quesne, business development director Digital at Oohmedia.

…consumers are interested in QR codes and after having permanently installed over 8,000 globally last year – I have seen the numbers and they do stack up. It is a no-brainer to incorporate this as part of their Digital Marketing channel, and really its just another “on-ramp” that captures those who are into it. Marketing is no longer about “one size” fits all – regardless of the product!

Isn’t it too late to look at nutritional info after you’ve made the purchase? If you skipped the menu boards at the front of the restaurant (with the nutritional info), ordered, sat down (or drove away), it’s too late. The decision of what to order/eat has been made.

At least this is a use of QR codes that provides information people might actually find useful. Typically we see QR codes leading to promotional pages or ‘ads’ touting whatever the marketer wants to promote, not information the consumer might be looking for. I do agree, though, it does seem silly to provide information that is available on menus boards in the restaurants or on the company web site, if you do want to look online after you sit down (or when you are not in a McDonalds.)

The confusing landscape has caused some to question the central role of the “big idea” in advertising. Several agency execs seem to think that it is far from dead. Milan Martin, managing director of Anthem Worldwide, says it’s not an either/or.

As with so many other things in life, it’s not an “or” discussion as much as an “and” discussion. Yes to big, enduring brand ideas that differentiate and articulate and Yes to digital expressions of that brand idea that actually bring those brand values to life for people in ways they care about. It’s the equation of “brand beliefs” + “brand behavior” = deeper, more profitable relationships between brands and the people they want to do business with.

His opinion was backed up by results of a poll Digiday took on the big idea’s future. 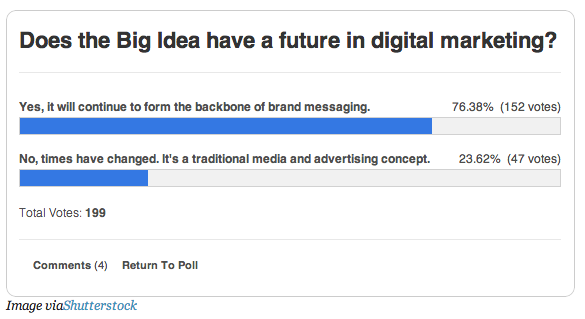 The moral of the story appears to be  that, despite the many changes in digital media, the focus on the basics must remain. John Kuefler, chief strategy officer at Callahan Creek, made the case for traditional values.

So true. Not that we in the agency world don’t need to constantly chase all those shiny objects, because you never know which one will be the next Facebook or Twitter. At the same time we so quickly forget that as we’re evaluating trends like RTB, banners only have a tenth the CTR as PPC, and most web traffic comes from organic search. As all great coaches will say, you have to master the fundamentals. Just like we so quickly forget that consumption of video content via good-old-fashioned television is not waning, but continues to grow while all the new media channels explode.