Digiday Research: Most publishers show ads to their paying subscribers

As a growing number of publishers build out paywalls and subscription products in a quest for more diverse and sustainable business models, many now offer “ad-free experiences” as perks to their paying audiences.

Although paywalls can negatively impact pageviews and the availability of ad inventory, some publishers say having an engaged, paying audience has actually helped boost their advertising businesses, particularly for publishers with specific and targeted focus areas. Having a highly-engaged audience that’s willing to pay for a publishers’ content can be a valuable tool for its salespeople, they say. It can also unlock access to more data for targeting, lead generation, measurement and attribution and more.

Stat, a health and medicine-focused media company attracts several million monthly uniques with only a small percentage of those being subscribers, according to Angus Macaulay, the company’s chief revenue officer. “Advertisers aren’t coming to us asking for four or five million impressions. It’s always about the right people. Stat+ subscribers are the creme de la creme of the people in their industries who our advertisers want to reach,” Macaulay said. 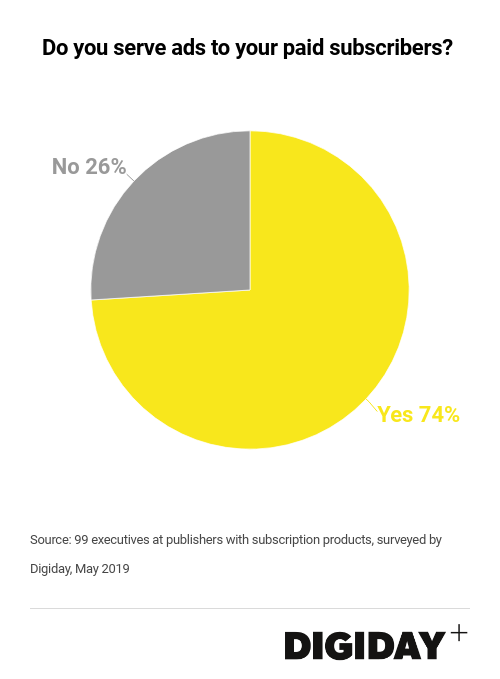 However, providing an ad-free experience can be a useful carrot to attract subscribers, especially as consumers continue to be inundated by pages overloaded with intrusive ad formats.

The Athletic, a sports-focused subscription publication, has adamantly eschewed ads since its inception. While The Athletic could serve ads to generate additional revenues, “we don’t want to compromise the end-user experience in the interest of revenue diversification,” said Adam Hansmann, co-founder of The Athletic.

One survey respondent told Digiday, “Being ad-free is a key feature of our subscription product. Having no ads is a huge benefit to users.”

Depending on the size of a publisher’s subscriber base, there might also be little revenue to pass up by skipping ads. “Plus members are incredibly valuable on a per-user basis but don’t mean that much in the aggregate,” David Stern, vp of product at Slate, previously told Digiday in reference to the company’s subscription offering.

“If the hard numbers didn’t work then it would have been a challenge to make the argument in favor of improving user experience by reducing the ad load,” Stern added.

If publishers are set on serving ads to subscribers, safeguarding the user experience is something to be mindful of. While the hysteria of ad blocking may not be what it once was, the problem is still something publishers grapple with, which is why many publishers are generally moving away from banners and autoplay videos towards sponsored content and more “native” formats.

Other publications, such as Bonnier-owned Saveur, are attempting to strike a middle ground by promising their subscribers a lighter ad load than non-subscribers might see.