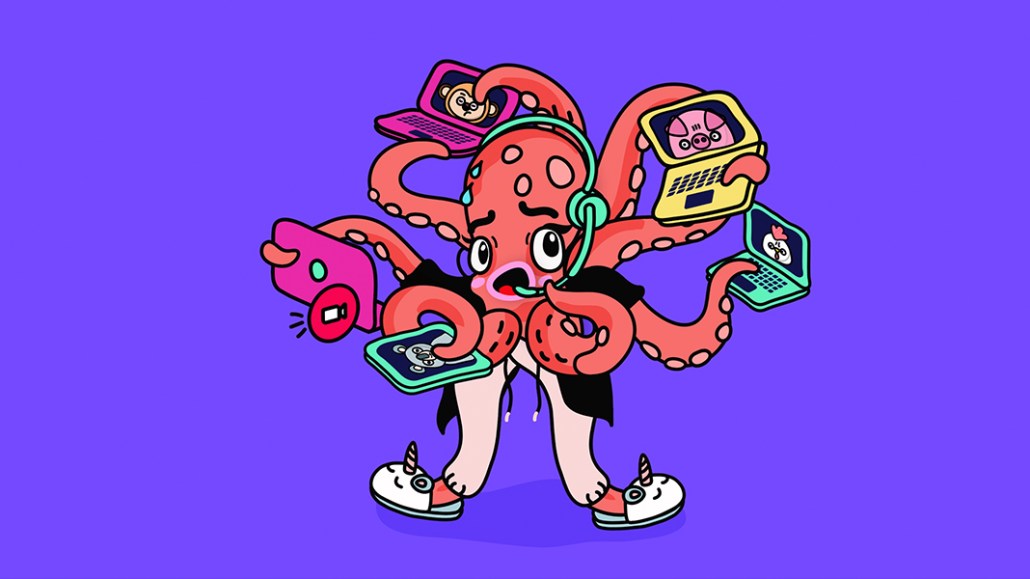 The future of work is largely at home — or somewhere outside offices — for many people, at least for the rest of the year. But while the early weeks were spent adjusting to the new normal, most people have settled in.

Digiday’s newest research asked respondents about the future of work and how their productivity levels, stress and lives had changed since they’d been working from home.

More work
Inside agencies, people are feeling like they’re working longer hours and attending more meetings. For agency workers, 37% said they feel video meetings get in the way of their productivity, while 51% said they’re “sick” of video meetings.

At publishers, the picture is mostly the same.

At agencies, for anyone above a manager, the average number of video calls and meetings has jumped from three before the pandemic to between eight and 10 in the first week working from home. It’s about 13 video meetings a week now.

Inside media companies and publishers, people are attending more meetings. Managers and director-level executives participating 13 video meetings a week now, up from three before the pandemic and 11 in the first week working from home.

Work is home, home is work
One of the side effects of the distributed workforce is a new relationship with co workers. More people are also reporting that the line between their work and personal lives is becoming more “blurred.”  At publishers, 67% of respondents said that was happening, while a whopping 73% at agencies said it had happened.

Respondents are also reporting they think their coworkers know them better, as do their managers.

Inside publishing companies, 66% of employees say lines between work and their personal lives is more blurred. At the same time, more people have developed a closer relationship with both co-workers and managers.

Miss working in the office
At agencies and publishers, 58% of respondents said they missed working in an office. But what they miss varies — and this is what employers are trying to figure out when they seek to replicate the in-office collaboration and serendipity so missing from remote workplaces.

Companies have made some moves to try and help workers as they’ve moved to working remotely. Inside agencies, half of survey respondents said their company was offering mental health support, while almost 40% said they were paying for office equipment like chairs or monitors.

At publishers, 63% of respondents said their employers were offering mental health support, while 37% said they were paying for office equipment.