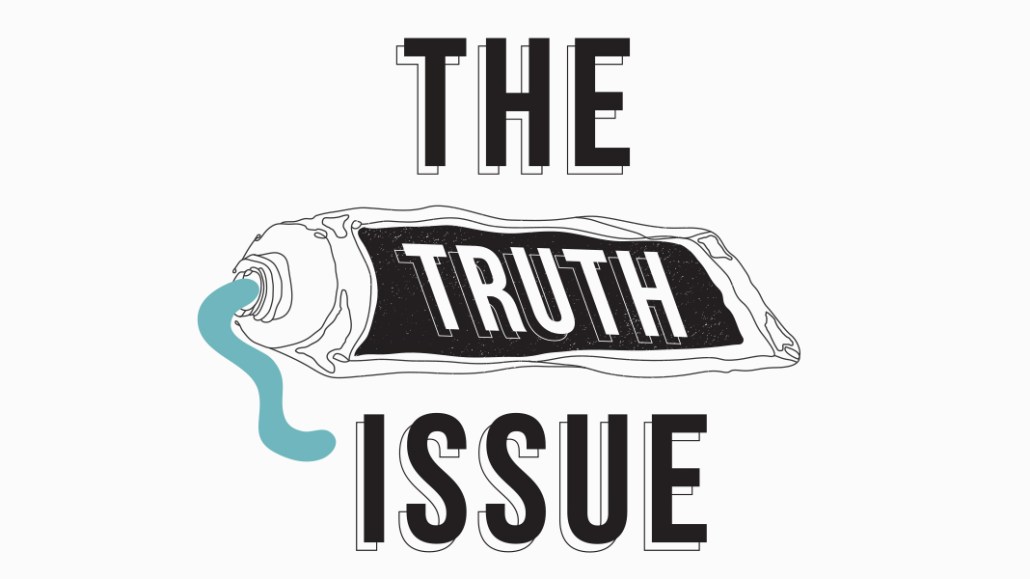 “Brand safety is our top priority.” “This isn’t a pivot to video.” “We put the reader experience first.” “Our agencies are valued partners.” If you work in media and marketing, you’ve probably heard these fibs so much, they probably don’t even cause you to blink. In industries based on image, people tolerate manipulation and exaggeration. Look no further than the language people use. Marketers have taken to renaming what we used to know as “ads” as “storytelling.” And with media and marketing being disrupted on all sides and the flow of ad dollars obscured by the advance of ad tech, there’s motivation to hide the truth — and the means to do it.

The reality is often something different. At Digiday, we’ve built a brand that’s based on calling out the challenges and realities of media and marketing, not pumping up the industries or shying from their problems. One of our most popular franchises is our Confessions series, where we grant people anonymity to shine a light on important issues like ad fraud, workplace abuse and shady billing practices. This issue of Digiday magazine, where we focus on the truth and lies in media and marketing, is an attempt to do more of that.

The theme of truth runs throughout the issue, starting with the true costs of building a native ad or subscription business, where so many publishers are pinning their hopes. In the media and marketing sections, we ask whether the ad tax trope is really as bad as people say and if brands really believe in the purposeful slogans they all seem to be adopting these days (spoiler: they’re not).

Ultimately, it takes courageous and innovative people to advance truth and transparency. We spotlighted several people who are trying to bring honesty to media and marketing, like media researcher Jonathan Albright, who has brought new understanding to how fake news spreads on social media. Remember when Jon Mandel, the former Mediacom CEO, created a firestorm three years ago with a bombshell report proclaiming that media agency rebates and kickbacks are real? We caught up with him to see what’s changed since then. Mandel says there’s a lot more work to be done, saying, “It takes a lot to break an addiction.”

On the regulatory front, FTC chair Joseph Simons and U.K. Information Commissioner Elizabeth Denham, both of whom seem eager to use their power to reign in the duopoly, will be key people to watch. No one said fixing big industries is far from easy. But being honest about the issues seems like a good place to start.