Video might be the future, but text is the present for digital news

Publishers are stampeding into video, lured by the hope that audiences and ad dollars will follow. But not only is video expensive and hard to do, a lot of people still prefer to get their news in text.

The Reuters Institute’s 2016 Digital News Report found that across its sample of 26 countries, 78 percent of people said they mostly rely on text for their news.

The top reason given for not watching video, by 41 percent, was that they find reading text more convenient. A significant portion — 35 percent — said they were put off by preroll ads, up from 29 percent in the institute’s 2015 report.

One-fifth said that video ads take too long to load. The institute has also found older people, who haven’t grown up with mobile phones, prefer to watch video on a bigger screen, while younger people are impatient with video load times and preroll ads. 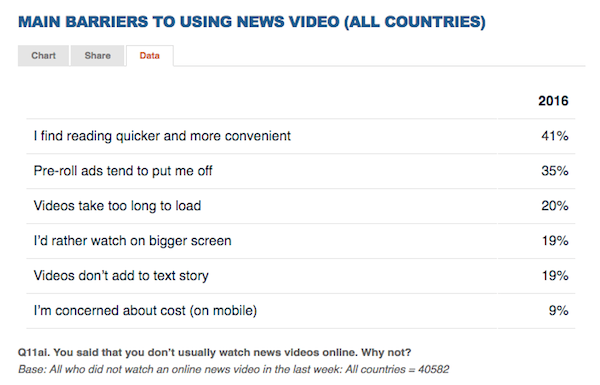 “There is a small proportion of people who are accessing video once a week but a significant number who aren’t, particularly on websites,” said Nic Newman, research associate at the Reuters Institute. “Obviously we’re seeing an explosion on social media and that’s not necessarily wrong, but there’s room for caution in terms of balancing your investment in terms of what people want. People value the control. Video’s great for some things but not for everyone.”

Croi McNamara, Upworthy Head of video, said she’s “not surprised” by the finding. “News has become a commodity and it’s much faster to read an article than watch a video, especially because people consume most content on mobile devices.” Upworthy is among the publishers that’s pivoted to original video, but with an emphasis on meaning- and emotion-based footage, not hard news.

Of course, all video isn’t created equal. In 2015, the report asked people which forms of video they were most likely to watch. In the U.S., people are most likely to watch news clips that add context (59 percent) or drama (52 percent) to a text article. Least watched were long, on-demand programs (18 percent) or livestream coverage of an event (25 percent). Publishers are still figuring out what works with news video; BuzzFeed for one is experimenting with various formats, from traditional ones to quick compilations of clips to videos with text overlay.

Duy Linh Tu, who teaches video at the Columbia University’s Graduate School of Journalism, said the problem is that reading is faster than watching and too much news video is poorly produced. “In the race to make more, news orgs are hiring people who can’t shoot or edit or tell video stories well,” he said. “It’s not engaging. Too often, news video is an talking head interview with some boring B-roll. Successful video has real action and emotion. Publishers need to worry about making their content better for the viewer, rather than worrying about making more of the same crap.”

The continued push into video seems inevitable, though. Publishers are trying to reach audiences on social media, where they’re spending more time and which is increasingly dominated by video, what with Facebook favoring video over text in its feed. A Facebook exec even predicted that the social network would “probably be all video” in five years.

People who use social media a lot are more likely to get their news this way, given that publishers are increasingly distributing news on Facebook in that form, and some of the barriers to video news may go away. News videos tend to have text overlay because they start out muted by default, so they’re not without text. Facebook also plays videos automatically as people scroll through the feed, which reduces load time.