Atlantic Media takes a page from Quartz with Defense One 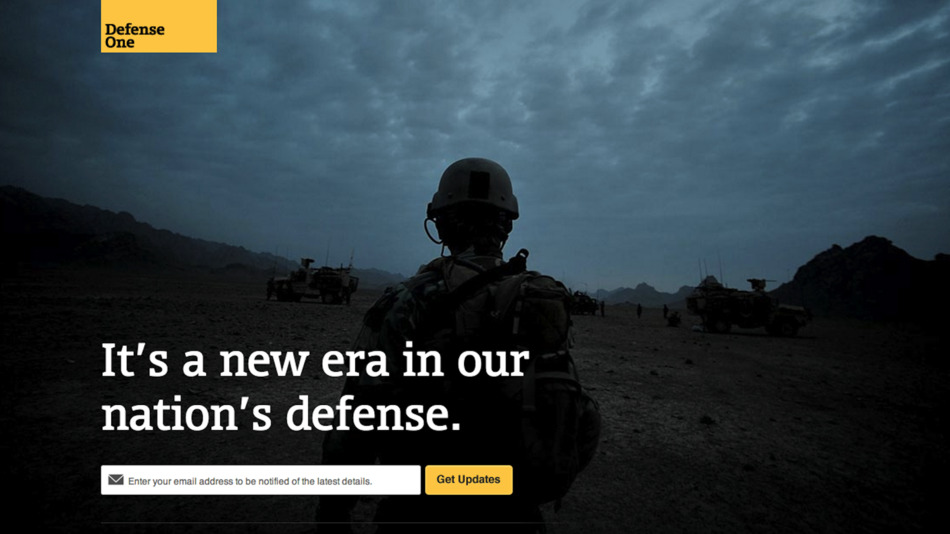 Atlantic Media’s business news site Quartz may draw the bulk of the headlines, but the company is trying a similar digital-first strategy with the niche but lucrative world of national defense trade publishing.

In mid-2013, the company launched Defense One, a digital-only publication that covers the future of global security. Since then, the site has grown quickly, attracted major advertisers and established itself as one of the few digital-first voices in the small, but influential market of Washington, D.C, defense publishers.

“Sometimes, it’s not about the quantity of people you’re reaching, but the quality,” said Defense One publisher Daniela Fayer.

In some senses, Defense One is running the Quartz playbook — although without as much emphasis on design and charts — by focusing on reader behavior, particularly when it comes to mobile. Around 30 percent of the site’s traffic comes from mobile devices, and its mobile app has over 10,000 subscribers so far.

Like Quartz, Defense One is pushing non-standard ad units such as the large-format “Catalyst” as well as sponsored content. It is also leaning heavily on its events in an effort stand out to both its readers and advertisers. Its traffic reflects its digital focus: comScore says Defense One’s traffic is too low for it to measure, but the site itself says it gets over 600,000 unique visitors a month, a  22.5 percent increase from a year ago.

Defense One, an offshoot of Atlantic Media’s Government Executive, faces a lot competition in a small but very crowded market. The defense publishing space already includes incumbents such Gannett’s Defense News, Breaking Defense and Jane’s, all of which are going after many of the same small subset of readers and advertisers that Defense One is.

“You have to offer the advertisers new, different things in this space because they can easily get your audience somewhere else,” said Erik Requidan, director of sales at ad sales management service Intermarkets. “Marketers here are going after just a few people who can affect legislation or regulation or some change that way. There’s a lot of duplication.”

Defense One tries to jazz up the typically dry national defense trade news by utilizing Web-friendly formats, such as explainers (“How Scared Should You Be of Al Qaeda’s New Butt Bomb?“), numbered lists (“7 Defense Issues That Should Be In the State of the Union Address“) and aggregation (it republishes articles from Atlantic Media’s other properties, including National Journal, Quartz, Government Executive and Nextgov). The site, which is run by eight full-time editorial staff, publishes three to four original pieces a day.

Big advertisers such as AT&T, PricewaterhouseCoopers and Northrop Grumman have all advertised on Defense One’s site since 2013.

“We hadn’t really engaged in enough digital marketing, so their popularity and the digital side appealed to us,” said, Ryan Sturgill, the senior manager at W.W. Grainger, which sells industrial supplies to federal agencies.

Requidan said that this digital focus opens up a lot of options for Defense One, particularly because it’s not also forced to juggle a legacy print business like many of its competitors.

“You have a lot of traditional players that are trying to evolve to digital in this space, but you have very few newer companies trying to figure it out,” he said. “It sets them apart.”