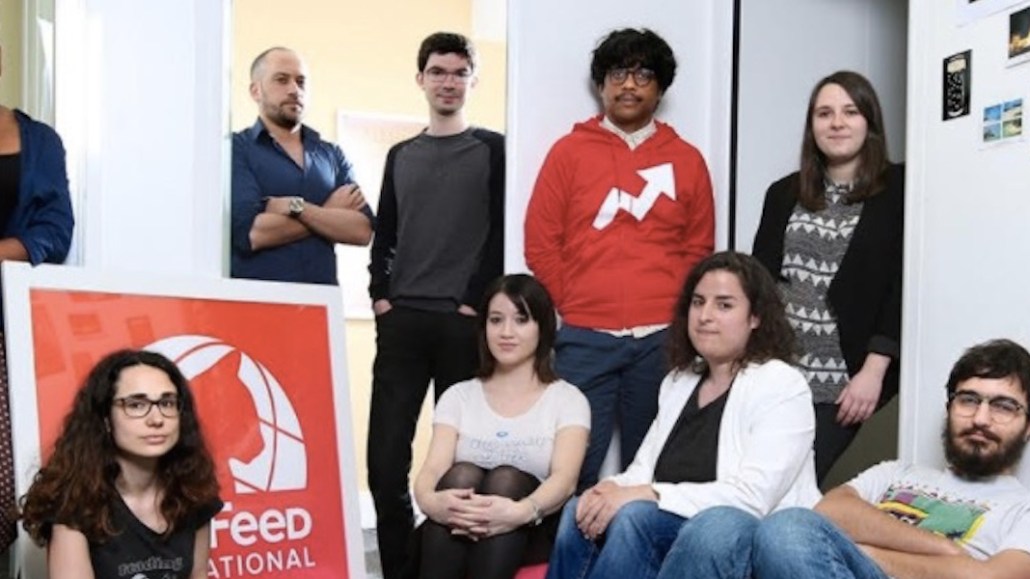 France’s national elections are coming up fast in April and May. That’s meant there has been a frenzy of fake stories, hoaxes and propaganda being spun left right and center. That’s kept France’s journalists busy debunking falsehoods, in a pivotal moment in their political calendar.

One of them is Jules Darmanin, a reporter with BuzzFeed News France, who is tasked with policing false information from his post in Paris.

He shares what a typical day at the Paris office looks like.

7:30 a.m: OK, fair enough, I’m not a morning person. I use the app Kiwake, which forces me to actually get up and take a picture of an object in my kitchen to make it stop ringing. When I’ve done that, I go back to bed. From time to time, I just turn off my phone, but I have yet to throw it against a wall.

8:00 a.m: I actually get up. Twitter is my first point of call, where I often find some tweets that could be useful for my work. It can be a very funny thread from a French teen or a hoax which found its way to the timeline of a politician.

9:00 a.m: I arrive at the BuzzFeed France office, a little sweaty from the bike ride from my place to our lovely office near Place de la République in Paris. I start to check Tweetdeck, Facebook and some of our social monitoring tools for cool stories for my colleagues and me to cover. We tend to share and discuss everything we find on Slack. It helps cut down on the time we spend in meetings.

9:45 a.m: Time for our news meeting. Right now, 13 people work at BuzzFeed France, and six of us are doing news. Therefore, each of us cover a pretty broad range of stories. I mostly do social news (local news for people who live on the internet), debunking stories and longer pieces involving online investigation.

10:45 a.m: While I’m reaching out to the author of a great Twitter thread comparing French presidential candidates to Haribo candies, I’m also on the Slack rooms of Crosscheck, a debunking project BuzzFeed France is a part of. It is built by First Draft News and is a collaborative wire service debunking the many hoaxes around the French election. BuzzFeed France is hosting Juliette Mauban-Nivol, an intern for First Draft, who is helping us with debunking fake-news stories. I ask her if she can work on a fake-caption story. She says yes (phew!).

11:45 a.m: I file my Haribo post and look into some of our international Slack rooms. It’s mostly Russian memes, but it’s also a good way to keep up with what my colleagues around the world are up to. I message Eimi Yamamitsu from BuzzFeed Japan to ask a question about a French bakery in Tokyo, and Craig Silverman, our media editor, who is an expert at exposing fake news, to plan a call.

12:30 p.m: The most important moment for a French person at work: lunch. I grab pasta al pesto to take away and, in a typical day, take 45 minutes to eat. Not in front of my screen. Needless to say, I experienced a culture shock when I went to work at BuzzFeed UK for a week.

2:00 p.m: We have a video training session with my colleague Pierre d’Almeida, who teaches us to make quickly turned-around shareable videos. For some stories, even debunking stories, it’s more impactful to spend time on a short video than a post.

2:45 p.m: A quick update meeting with my editor, Stéphane Jourdain, on some longer-term open-source intelligence stories, that I am working on.

3:30 p.m: My French presidential candidates Haribo story is making an impact. Susie Armitage, from our awesome adaptation team in New York is keen to translate the post as it is a great way to explain the mess of French politics to the English-speaking world. Collaborating and adopting content across offices is one of BuzzFeed’s biggest strengths.

4:45 p.m: I start to see a new hoax trending on Twitter. It’s a fake page imitating Belgian daily Le Soir and saying that [French presidential candidate] Emmanuel Macron’s campaign is financed by Saudi Arabia. A lot a people fell for it, including National Front MP Marion Maréchal-Le Pen. It’s obviously fake, but I want to know where it might come from.

5:30 p.m: I leave early to give a class to a small group of journalism students at Sciences Po. With my colleague David Perrotin, I teach them live-reporting, political fact-checking and debunking. All that comes down to treating the internet as a field of reporting. I make them work at the same time as me on the Macron-Saudi Arabia hoax, and we all come to the conclusion that it was first shared by pro-Iranian accounts and websites. Nothing strong enough to attribute the hoax to anyone, but still, an interesting path from Iranian propaganda to the French far right.