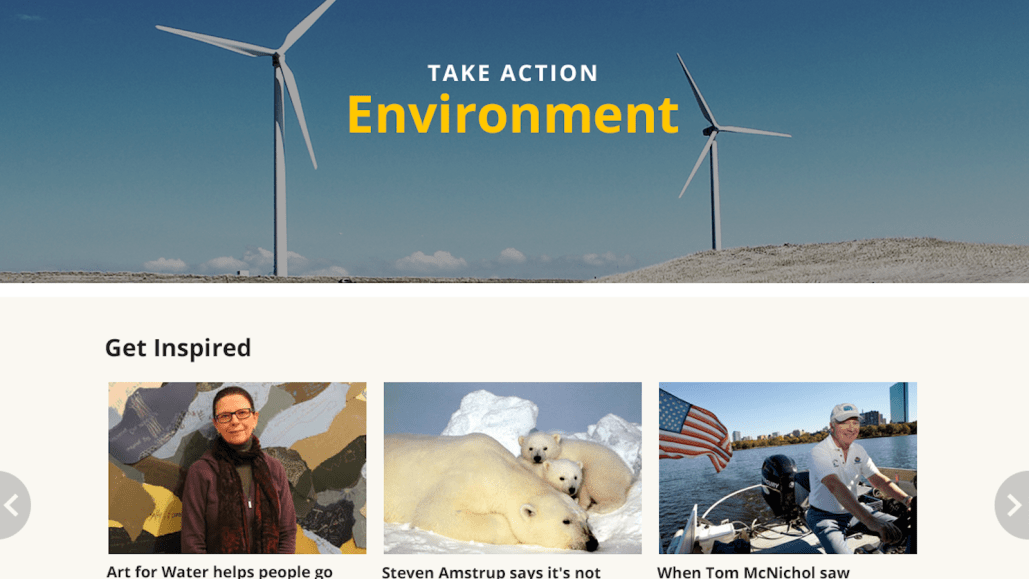 The Christian Science Monitor, a 106-year-old news organization that boasts a serious, civic-minded audience, would seem well poised to crack the engagement code. A digital-focused publication since 2008, the Monitor ought to be ahead of its competitors in keeping readers on its site and engaged. Yet the audience isn’t as committed as one might think; csmonitor.com has a high bounce rate (70 percent leave after viewing one page) and low pages per visit (4 on average).

The Monitor is betting that it can reverse those numbers, though, through a so-simple-it’s-brilliant tactic: simply asking for more engagement. Among a raft of new features coming to the site starting today, the most prominent is a “take action” link in articles that eventually will lead to a page with related stories, conversation starters and links to relevant outside organizations and elected representatives.

The idea grew out of the strong reader response the Monitor got to a commentary it published by former Sen. Olympia Snowe with a call-to-action link.

Monitor readers “really care about what’s going on in the world,” said Susan Hackney, chief marketing and strategy officer for the Monitor. “They’re interested in solutions, progress, getting involved as a result of reading. We need to make it clear what we can do for them. That inspired us to think about how we could facilitate paths to action.”

Similarly, the Monitor has begun asking readers at the bottom of stories for feedback or suggestions for follow-up stories. The Monitor had tested this approach on its politics channel, DC Decoder, and in addition to getting readers’ feedback, it asked for their email, which also provided a way to contact readers after the polling.

“We got really high engagement when we would go back and email readers and say, ‘Here’s the story you asked us to cover,’” Hackney said.

Along those lines, the Monitor also is planning to enact registration on the site in the Fall. It could even open the door to a membership model, but the preliminary plan is to use it to reach readers directly in exchange for benefits like the ability to personalize their site experience.

Other features to boost engagement are more typical of recent site redesigns. With the new site, created with the help of Boston-based design firm Beam, the Monitor also is trying to take its navigation bar up a notch. When you click on it, it displays all the site’s subsections. A “sticky” navigation bar that follows you as you scroll includes editor’s picks and social share links. You can see related content at the end of stories and hover over a reporter’s byline to see other stories written by that same reporter.

Later in the summer, the Monitor plans to introduce its own form of explainer journalism, a new template that will let reporters pick formats to help tell ongoing, complex stories.

Online ad revenue has become more critical to the Monitor since it scaled back its print presence in 2008 to focus on its ad-supported website. Hackney said online ad revenue has grown 25 percent each of the past three years. Now, it needs to get people to stay longer and return more frequently. With 7.3 million unique visitors in April, per comScore, the site also is a niche player in online news.

Getting people to take action on a story could turn out to be an effective way of turning drive-by readers into regular ones, said Joshua Benton, director of the Nieman Journalism Lab, though it can be difficult to carry it out. Readers who don’t see their story of choice written might be disappointed, for example. To make the new features noticeable, it needs to be widely used, but it may be impractical to include suggestion boxes on every article. (The poll will appear on every story, and the take-action link on about one-third, according to the Monitor.)

“Everyone wants to get people to stay on their site for longer stretches,” Benton said. “It seems to me, it’s all about the execution.”

Yet it’s hard to write off the Monitor, which has long bucked conventional wisdom, from including the name of its patron church in its name (even though the publication isn’t a platform for evangelism) to handling the digital transition better than expected. With people increasingly stumbling on the news via search and social media, the Monitor’s challenge will be to stand for something — something that’s not necessarily easy to do with the balanced approach to the news it espouses.

“We’ve worked hard to make our site look different while making it achieve our business goals,” Hackney said. “It’s harder and harder to break through.”