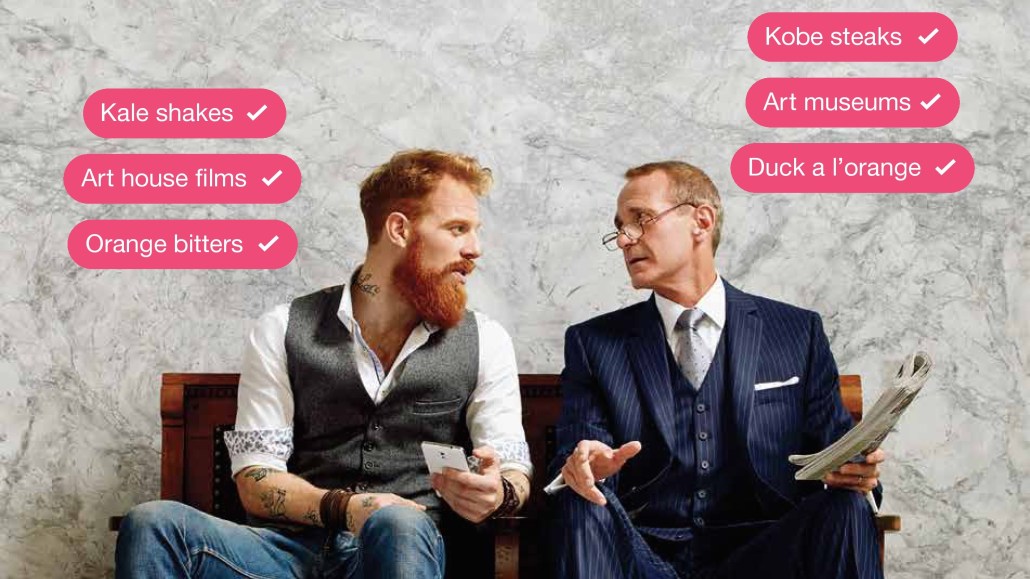 Foursquare wants to be people’s digital guide to the physical world, so it launched an outdoor advertising campaign today to spread the word.

The six-week campaign will appear at bus stops, train stations and phone kiosks in Chicago and New York, and at bike share stations in Chicago. It is the company’s first advertising campaign and an attempt to simultaneously rebrand Foursquare and jumpstart stagnant user growth. The campaign’s aspirations are to educate non-users that Foursquare is a personalized local search app and no longer “that check-in company.”

Each ad features two people with contrasting tastes (a hipster and a banker; a football fan and a fashionista and two identical twins with opposite tastes). Foursquare COO Jeff Glueck said the company hopes the ads will display how Foursquare can be used by anyone.

“The solutions today give everyone the same recommendations,” Glueck said. “Technology should really be like a friend who gets to know you and how you’re different.”

Foursquare decided upon an outdoor campaign after Seamless, an online food ordering service, and Venmo, a mobile app that allows users to transfer money to one another, said their outdoor campaigns were successful in driving app downloads.

The primary goal, however, is to drive awareness of the new Foursquare, Glueck said. The company, which has taken over $162 million in funding over its five and half year history, will be conducting brand lift survey via Survey Monkey in order to gauge its effectiveness. Foursquare did not disclose how much it would spend on the campaign.

In addition to outdoor ads in Chicago and New York, Foursquare will be running app download ads on Facebook, Twitter and in pre-roll video ads in 14 other markets including Atlanta, San Francisco and Los Angeles.

The ads, the rest of which are featured below, were created by boutique creative agency Judd Branding and media was handled by Omnicom’s OMD.

“[Outdoors] is where the app lives every day, helping people find hidden gems in their neighborhoods and when traveling,” Glueck said. “We really wanted to be visible in the real world and illustrate the kinds of spaces where we think we could be useful for consumers.”

A former startup darling, Foursquare recently overhauled its app and brand amid concerns about user growth and revenue. In July, Foursquare removed check-ins, its signature feature, from the app in order to focus efforts on local search and discovery and make the app appealing to a wider audience.